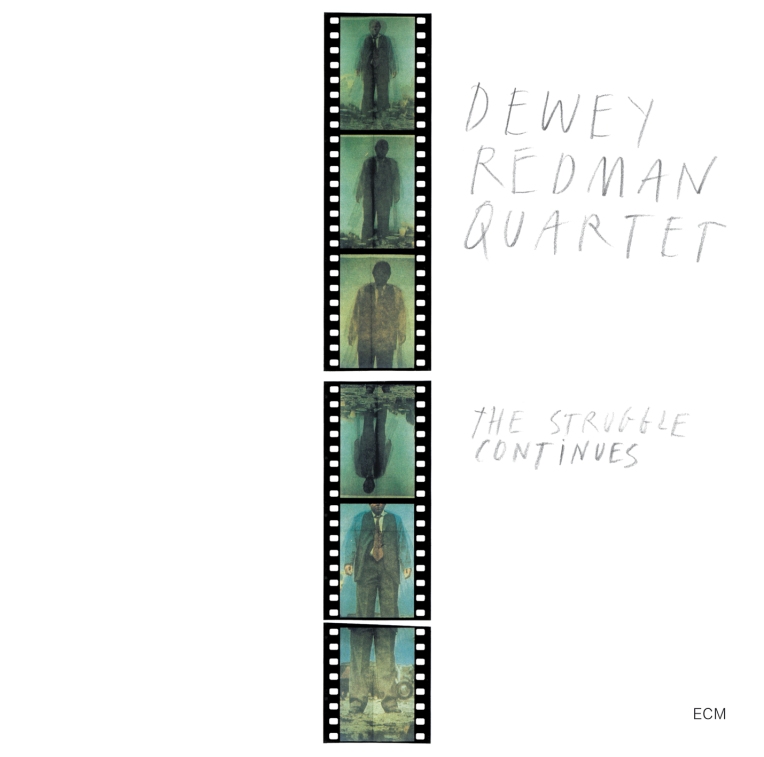 Somewhere along the way, Dewey Redman must have lost an “e” from his last name, for he was a reedman if ever there was one. A self-taught Texas boy, he was already playing with Ornette Coleman by his teens. Still reeling, I imagine, from the two Old and New Dreams joints produced by ECM just a few years before, listeners were sobered by an unforgettable experience with The Struggle Continues—an experience felt afresh when the album was at last reissued on CD in 2007, just one year after Redman’s death.

Those Coleman roots spring right from the soil and grab us in “Thren.” Bookended by a frolic and a march, its fancy footwork from bassist Mark Helias and edgy pianism from Charles Eubanks make sure we aren’t going anywhere. All of this is just a pretext, of course, to get us hooked before Redman presses a saxophonic iron into the wrinkles of “Love Is.” Like a new morning in suburbia, its speaks its promises in voices calm and familiar, the brushed drums moving our worries into the gutter like a street sweeper, the sun peaking over the distant hills and stretching its light to those less fortunate. Eubanks is as rosy as ever in a cut that, as the album’s longest, makes it clear where the band’s heart truly lies. Things get even steamier in “Turn Over Baby.” Raw and curvaceous equation that it is, it fronts smoldering lines above Ed Blackwell’s watery cymbals, further fueled by the passions of “Joie De Vivre.” Legato phrasings on tenor only heighten the punctilious quality of the rhythm section and its inspiring uplift into “Combinations,” the latter a tangled yet pleasing confection with a sweet bass center and drummed sprinkles on top. The not-so-secret ingredient is Redman himself, who samples every course before licking his plate clean in an upright rendition of Charlie Parker’s “Dewey Square.”

As someone so utterly attuned to everything going on, around, and within him, Redman was almost peerless for his time, and seemed only to grow in the context of this one-off combo. “At the top of their game” is not a phrase one need apply to these players, for by the time we encounter this music they’ve already scaled down the other side of the mountain and climbed another. One feels they could have easily extended each of these tunes to an album’s length. As it stands, the final set connects its dots in perfect time.

This is by far one of the swingingest albums in the ECM backlog, and is anything but a struggle. Its fluid, forward-looking, and stichomythic playing is its own history. Produced by the great Bob Hurwitz, then head of ECM’s American operations and now president of Nonesuch, this one will stand the test of age.