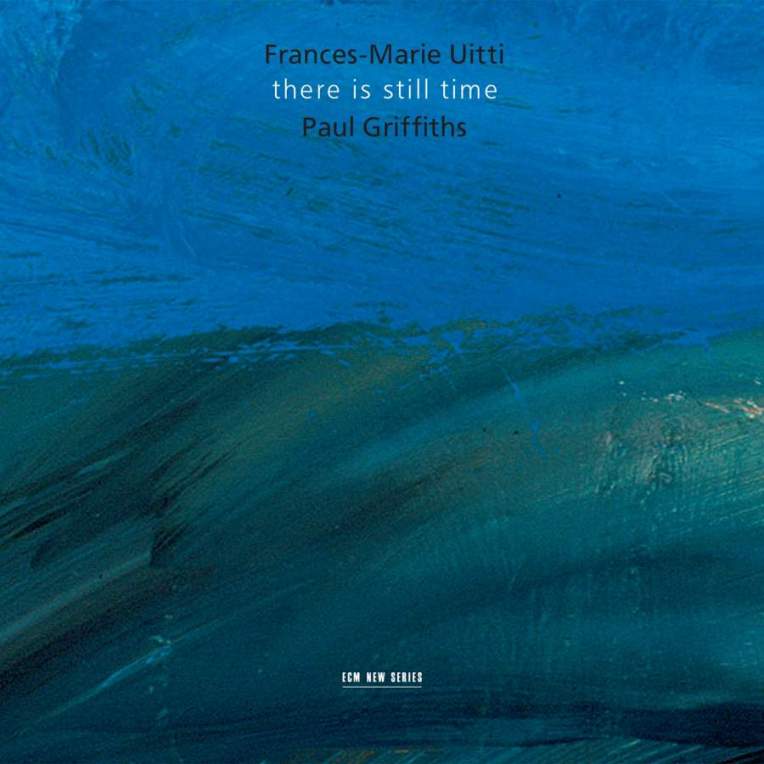 there is still time

“I shall th’ effect of this good lesson keep
As watchman to my heart.”
–Ophelia

Subtitled “scenes for speaking voice and cello,” the fortuitous meeting of music writer, novelist, and librettist Paul Griffiths and cellist Frances-Marie Uitti that resulted in there is still time wears no masks. Using only the 482 words available to Ophelia in Shakespeare’s Hamlet, Griffiths works with a vast magnetic poetry set on a refrigerator that runs on Uitti’s often-haunting improvisations. It is neither Ophelia nor Griffiths who speaks, but someone in between, a voice not so much twice removed as one once excavated and once buried. And while the backstory to this recording is fascinating in and of itself, its aural language is such that one may enter it blind and emerge from it fully sighted, if not the other way around. Griffiths treats language as a precipice from which to hang rather than as a spine from which to sprout nerves and muscle. Thus does the music’s grip deepen our mood with each weakening finger.

“I cannot remember” are the first words to awaken our senses, “when this is all over” the last before silence engulfs us: a brief life forgotten, regained at death’s door. Only the future can be held close, swaddled in opaque linens as it slips slowly from our hands into Uitti’s mournful fundaments and harmonic firmaments alike. Her reverberation becomes a stencil, and breath the paint sprayed through its glyphic wounds, where plasma congeals at the hinges of revelation. Griffiths’s intonations are fatigued, as if from the effort of articulation alone. In “think of that day,” he asks, “what should I fear?” A question that slithers thence, only here we get one of its clearest answers: what the voice fears is that “you,” the other to whom is being spoken, will say nothing. Such trepidations are thematic, hidden like Hamlet behind the curtain, stabbing at the wrong enemy. This troubled air returns for “how I wish,” over which the cello looms, a commentary on a commentary. Again, Griffiths speaks as if the very effort were much to bear, as if utterances of desire were the sole means of undoing it. The “you” remains silent, stagnant like a pool in some deserted landscape where the wind is never missed beyond perpetual cloud cover.

Griffiths doesn’t merely read his words, but comports them. If there is such a thing as method reading, then via his delivery we find an especially potent example in “call from the cold.” Its poetry draws a series of contact points between the body and the intangible, between expectation and inception, between the cello’s snowy scrapings and the listener’s suspension of disbelief. The narrative then sprouts bittersweet fruits from the buds of “touching,” skins of hope peeling away from flesh of horror. The melodious “there it was” measures the past like some vast diurnal clock compressed into the mouth before being expectorated in but a fleeting conjuration of lips, teeth, and tongue as Uitti draws whisper-screams in the air with her sobbing. Where the sunrays once frolicked at dawn, we find traces of “the bells,” no longer immortal yet still haloed by a lost cause, fading beyond every closing ear-lid. We are alone with their voices “some where,” bound by a capsule of parallel selves and places split by the prism of a single morpheme. The internality of it all is lifted once “for you” flies off the tongue with urgency. As much a question as it is a challenge, it emotes like an animal peering through the foliage at its own reflection, cello rasping, a gravelly Echo. “I did look” further slices open memory—an impossible dissection, it seems, for only more memory lies within, beating to the rhythm of an extended arco meditation, drawing out this operation to its most healing conclusion yet.

These points of contact are at once a source of expression and a denial of the self-generation implied by spoken words, such as in “my one fear.” The verb “touching” rings truest here and surfaces vividly as a means of grappling with the unknown. The nameless other is drawn in whispers and time, through which all is revealed, vulnerable and contrived. At this point, I cannot help but extend a line to King Lear, for it is speech over which the maddening patriarch harbors the deepest anxiety. Without Cordelia’s obligatory words of praise, for instance, he is but a blank page before her. (We hear this again in Lear’s deprecation: “She hath…struck me with her tongue.”) Similarly, in “the door,” the voice fears finding what it searches for: the mouth shut like a gate to possibility. In light of this, Griffiths’s final words (every detail captured by the superb engineering) are perhaps the most Ophelian. They lie in wait beneath the surface of the lake, grabbing hold of refractions baited on the cello’s fish hooks, pulled like a sheet from a sleepless bed.

Uitti’s ability to sound as if she were at once reacting to the words and birthing them is captivating, as are her wordless interludes, four of which trail-mark the program. The recitations strung between them make statements by enhancing the fallibility of statements, each utterance a fantastic implosion. Griffiths’s circadian rhythms are sometimes off center, sometimes regular to the point of apathy, and in being so speak with immediate effect. This is, perhaps, why Uitti’s art meshes so organically, for it pulls at the same frayed edges in hopes of unraveling a color, a texture, and a pattern unfamiliar to them both. Whether or not that unfamiliarity extends to us depends on our willingness to touch the text as a living sound, so that by the end we are renewed through impermanence, redrawn in monochrome by a parallel self in the here and now. What we fear is not to receive but to give and be received.

My own humble gift, then, is an offering cast from those same 482 runes:

it is not for naught
that the lady is here
the daughter of a lord
nay, of an owl

there’s a saint
larded with false affection
please, fear him not
for he hath bore it all for you

quoth she,
“steep is the way to dalliance”

quoth she, “take them again
these flaxen columbines
and cast them by your deathbed
for they will keep you heavenly”