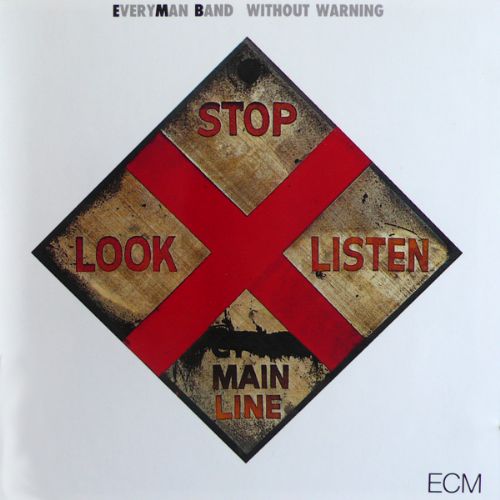 After the mind-numbing crunch of the Everyman Band’s self-titled debut, and considering the title of this follow-up, little did I expect the sprightly charm of “Patterns Which Connect.” This smooth opener is as uplifting as heck, due not least to Bruce Yaw’s rubber band bass line Marty Fogel’s soaring tenor. “Talking With Himself,” on the other hand, seems to begin in the middle of a stream of improvisatory energy, but continues with an openness that is nothing if not welcoming. Guitarist David Torn grinds his axe on flint stone and spits plenty of flame, but is content in periodically laying down his torch so as not to obscure Michael Suchorsky’s keen drumming. Like a spoon through porridge, “Multibluetonic Blues” works viscous nourishment into edible consistency, blending the tenor saxophone’s soulful brown sugar crust before the searing heat can burn it black. “Celebration 7” sounds like a plugged klezmer tune and shows the band in fine attunement, as does the whimsy of “Trick Of The Wool.” The album’s most appropriate title comes from “Huh What He Say,” which from an initial drawl finds linguistic traction in Fogel’s throwback of a solo. “Al Ur” caps things off with another vibrant sponge that soaks up all of the goodness that surrounds it.

This could easily be described as a killer of an album, were it not for the fact that it gives rather than takes life away. Along with Neighbourhood and Travels, it is among ECM’s more feel-good albums. Like a comedy of manners disguised as a film noir, it titillates behind an artful gloss.