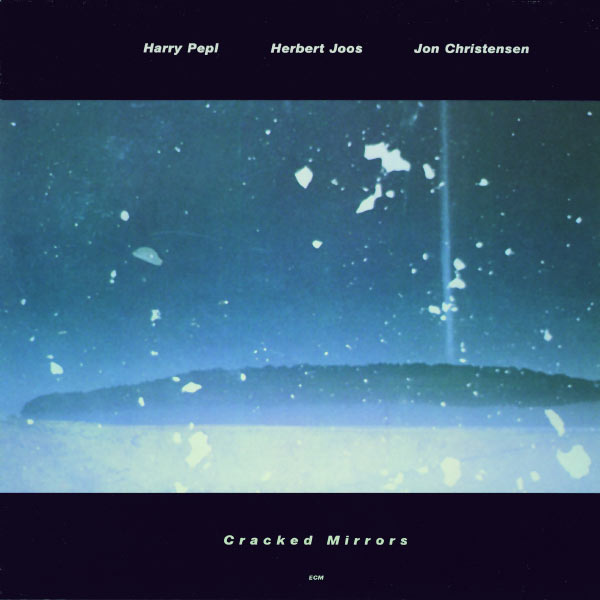 After my faulty impressions of guitarist Harry Pepl’s effort with Werner Pirchner and Jack DeJohnette, I was gratified to stop on my listening journey at an unassuming little way station called Cracked Mirrors, which proves a far better showcase for Pepl’s innovative talents. For this collaboration, he welcomes Herbert Joos on fluegelhorn and drummer Jon Christensen. Joos lays down a breathy gorgeousness in his two-part “Wolkenbilder” (Cloud Picture). The first of these sets Pepl’s acoustic sequences into the recesses of an ambient storm, while the second makes beautiful use of midi and underscores Pepl’s off-kilter regularity. Joos shines like a snake of light into “Reflections In A Cracked Mirror.” In a rare death by drum machine, Christensen hauls us through a thicket of unsettling midi guitar, which is only strengthened by the punctiliousness of Pepl’s execution. “Schikaneder Delight” pays homage to, I can only surmise, Emanuel Schikaneder, Mozart’s famous librettist, with a showy ball dance that plods like something from a calliope before morphing into a Bill Frisell-esque fantasy. “Die alte Mär und das Mann” (The Ancient Tale And The Man) is straightforward trio work that features more greatness from Joos, who also excels throughout “More Far Out Than East,” in which Pepl is clearly having fun skittering through the rafters. “Purple Light” brings back the shaking and trembling, leaving us drained of our “Tintenfisch Inki” (Squid Ink). This final track features lovely piano from Pepl, who sends this eclectic marble skee-balling into orbit at last.

Pepl’s playing, as restless as it is welcoming, is difficult to pin down. This makes it all the more fascinating. He is the bloodstream of a vast organic landscape, where feelings of fracture share the roads with heavy travelers. One to explore.