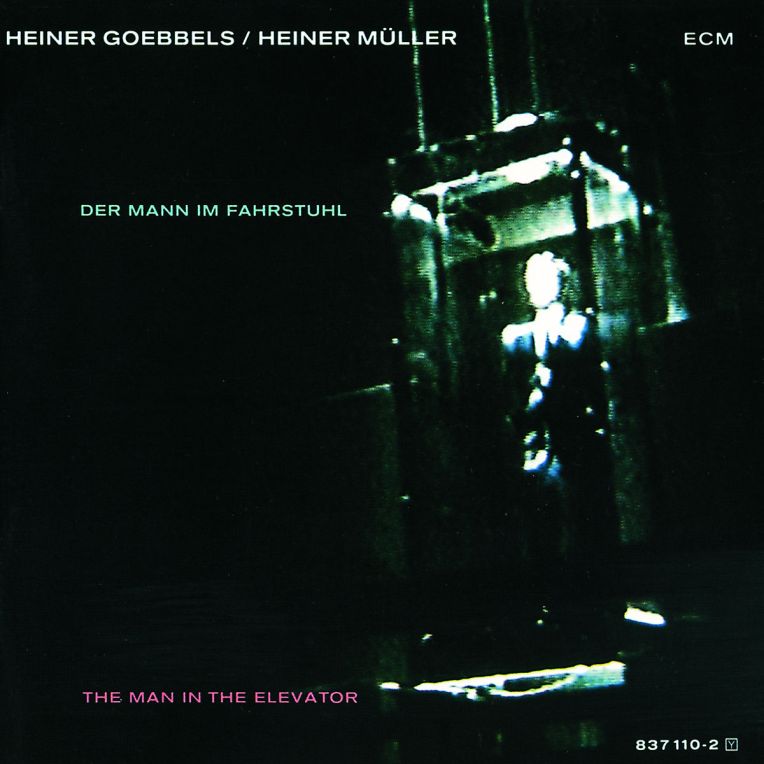 “Your home is a box. Your car is a box on wheels. You drive to work in it. You drive home in it. You sit in your home, staring into a box. It erodes your soul, while the box that is your body inevitably withers…then dies. Whereupon it is placed in the ultimate box, to slowly decompose”
–Arlington Steward in The Box

Heiner Goebbels continues his (man)made-in-heaven collaboration with Heiner Müller in this fascinating piece of hate mail to the modern condition. Drawing on talents as diverse as Arto Lindsay, Ned Rothenberg, George Lewis, Fred Frith, and Don Cherry, it begins as it ends: in a dance of doppelgangers. Lindsay carefully plots every step of this morbid ball with his delicate guitar. He is the everyman, the proverbial drone splashing his thoughts against the sphere of his labor, rattling like the many cages of transport that carry him through life’s many turns. Like his instrumental comrades, he is constructed by his attire, tuned to the plight of interaction. Lindsay’s omnipleasant diction luxuriates in every rounded r, a tempered steel to Rothenberg’s engaging reeds, the latter a guardian angel fluttering at our backs, constantly tapping the shoulder of those of us who cannot help but ignore the gesture, we in whom ignorance is a coping mechanism.

Lindsay introduces us to the Boss, Mr. Number One whom one never addresses directly. His is a name we must forget, for behind that visage of darkness lies the agitated voice of Ernst Stötzner, who seems to channel David Moss in a constant breakdown of communicative interest. Lindsay’s protagonist responds with a kneejerk expectoration, a James Brown-like cry rendered meaningless in a muzak-infested void. Two distinct voices tainting an urban desert, whose only oasis is circumscribed by the sweeping hands of a wristwatch.

This is a life written in indecipherable shorthand, a steno bound in human skin. A dripping, Peter Greenaway-like pillow book as résumé. A ball-peen hammer ticks away against the inside plane of a metallic skull, branded by the letterhead of a company whose product is never made clear. A desktop computer whines its woebegone tale. The elevator continues to glide along the shaft of our expectations, or lack thereof, smoothed along by the grist of mysteriously absent clerks and secretaries, every coworker a follicle in the dandruff-infested scalp of society.

A flapping of the lips, as if to proclaim, “I am here.” The batting of an eyelid, as if to deny the very same. Against the sparkling passage of data, one can only run in place. A voice over the PA. The boss tops himself, spilling his brilliance across the already untended battlefield of his planner. The populace ignorant, spawning the one serial number who refuses this lot. A warped record of Brazilian love songs melts in between floors, seeping into the sewer, which carries the muck of a single workday below the feet of protesters on the street. Their appeals blend into the signage that advertises their lives.

Intimations of a faraway people and their music laced with grasses of which one can only fantasize. The fume-infested club offers no solace, and only serves to hem the cloak of anonymity, which we can never seem to shrug off. The possibility of rising to the top of the bureaucratic food chain is as vain as hoping that a parachute might spring magically from one’s back the moment he jumps from the penthouse window like so many before. Still, at the end of the day, as the varicolored air burrows like a snake into one’s open shirt, a dream of love waves as one surrenders to a different sort of imprisonment, one in which bliss is real because it is self-selected. But this love belongs in another’s arms, those of the man you’ll never be, who sings as he lives: boisterously out of tune. Cherry’s trumpet cleans the slate before filling in the chrome grille of the last car you’ll ever see. A car whose license plate reads BOSS, and whose chassis was built on the predecessors into which your body will be absorbed in preparation for your replacement.

Such are the polyglot galleries Goebbels draws out of his distinct array of inceptions and spoken words. His is a scathing and evocative exploration of the urban landscape, but one that never smacks of moral self-righteousness. Rather, it involves itself in its surroundings, drawing red threads through death, the corporate environment, and noises of progress. Goebbels joins disparate elements to unite, at one moment pounding them together like two pieces of a jigsaw puzzle that won’t quite fit, the next letting them speak to one another in agreement.

This is an altogether evocative work. Like any self-respecting postmodernists, its creators always seem to implicate themselves in the very destructions they describe. Which is perhaps why the elevator is the perfect metaphor: its verticality is counterintuitive to the horizontal passage of human traffic. In that 90-degreee intersection lies more than a geometrical relationship, but something of a defining moment, a physical decay that can be felt in the indeterminacies of music-making, in the fragility of song, and in the power of speech.