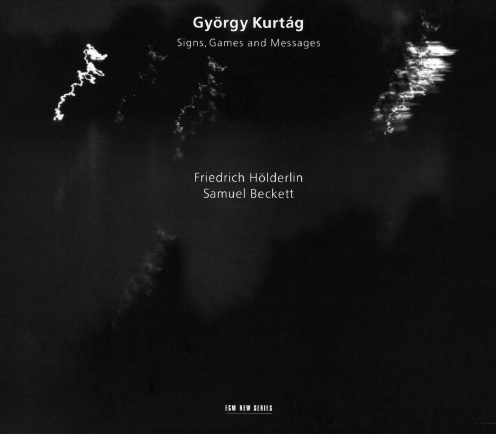 When the heavenly procession proceeds higher
Then the joyful Son of the Highest
Is called like the sun by the strong,

As a watchword, like a staff of song
That points downwards,
For nothing is ordinary.

In literary criticism, we throw around our fair share of arbitrary terms. Yet one I stand by, and of which I am especially fond, is “intertextuality,” which refers to the borrowing, shaping, and influence of texts on other texts. Similarly, one can say many things about Hungarian composer György Kurtág. He is a “master of the miniature,” a microscopic craftsman. His language implodes with a hermetic (im)precision. His wit is boundless, unassuming, and unabashedly lyrical. And so forth. But in the end, his sound-world is nothing if not intertextual. For one, we might feel tempted to read the Hölderlin-Gesänge for baritone as an exercise in a less tenable buzzword: deconstruction. Kurt Widmer’s superbly controlled breath wanders from its cradle in search of feet on which to stand, but instead finds a carefully broken ground. Its wavering entrances drop from a cloudless sky. The unexpected appearance of trombone and tuba beget a coarser exposition, proving that Kurtág’s fractures are never twice the same (compare, for instance, to the Kafka-Fragmente). Where sometimes he externalizes the hidden, here he shows us just how fragile the hands of our psyches must be when holding language. These are pieces not with but about words. Therefore, I must respectfully disagree with Thomas Bosche, who in his liner notes says “there is a secret here that is difficult to decode.” Rather, everything about this music is naked.

If anything, it is the ever-evolving opus that is Signs, Games and Messages which presents us with a more enigmatic grammar to parse. These fleeting vignettes for string trio—no less descriptive than their vocal predecessors—shift from playful (“The Carenza Jig”) to plaintive (“Ligatura Y”) in the blink of a galactic eye. The title starts us on the path to understanding: signs are the essence of communication, games the fields in which signs are manipulated. Yet messages trapise somewhere in between. Signs work differently than games, creating a freer vocabulary which, though it may be bound by rules, is not necessarily restricted by them in outcome. One of the most masterful pieces in this respect is “Eine Blume für Dénes Zsigmondy,” which unfolds silently not unlike a flower (an image plain to hear even before one looks at the title—a testament to Kurtág’s flair for the descriptive) while also wilting. In this instance, however, secrets don’t extend beyond the personal, so that every idiosyncrasy of “Perpetuum Mobile” A and B becomes a diacritical mark, leaving only the orthography for us to deduce. Even pieces like the “Hommage à John Cage” crumble before the pantheon of inspiration, as if aware that the only way to bring about their finer implications is to grind them into dust. Yet perhaps all this secrecy simply boils down to subtlety, for even in the stealthy clicks of “Schatten” we may see ourselves reflected.

…pas à pas – nulle part… brings together these same instrumental forces (baritone and string trio) and adds percussion to settings of poems by Samuel Becket, with a sprinkling of aphorisms from the misanthropic French writer Nicolas Chamfort (1741-1794) for good measure. Over the course of—count them—34 parts, this collection draws strings between a fragile politic. From falsetto to whispers, the fantasy-like vocal aesthetic only seeks to enhance the “barely there” instrumentation. Against some intensely emphatic moments, the cello mocks with its self-harmonization, as if to simultaneously beautify and underscore an entire classical tradition. Lively stuff.

This is music that lingers, both within its own shadows and in the recesses of our memory. Unlike some contemporary music, it never feels like a challenge. It is, rather, a mellifluous gesture of hope born from fragments of hatred.