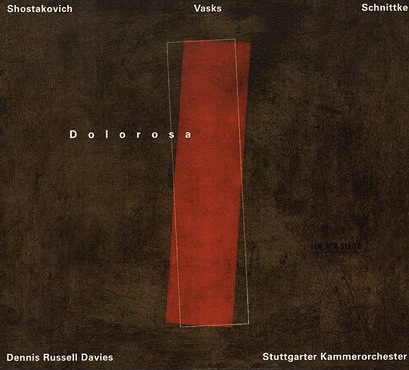 Orchestral transcription can be a contentious enterprise, obscuring as it enhances. Yet in rare cases its contours manage to take a shape all their own, living a new life somehow beyond the shadow of the original. Of this transformation we get two fine examples in Dolorosa, a well-conceived program from three distinct compositional minds.

The works are presented in chronological order, with a 1967 orchestration of Dmitri Shostakovich’s String Quartet No. 8 as a “Chamber Symphony” coming first. The arrangement, by conductor and violist Rudolf Barshai (the only one ever approved by the composer), is brilliant in that it avoids masking itself and features a flowing chain of solos. The swell of grief that besets the first movement now feels like a cinematic shift rather than climatic one and leaves a lethargic trace on the second movement. Conductor Dennis Russell Davies takes a conservative tempo on this often-cathartic passage, figuring it as a page manifesting its own ink rather than one furiously scrawled upon. The macabre minuet that follows in the third reaches new dynamic heights in the current version, and allows us perhaps above all to feel what the composer himself read into the energies breathing through it (though, as Richard Taruskin reminds us, the motivations for doing so were questionable, the result of a personal revisionism). The quartet as a whole is an intertextual treasure trove, comprised primarily of snippets of Shostakovich’s own works and those of Wagner and Tchaikovsky, in addition to revolutionary songs such as “Tormented by Grievous Bondage.” Whatever the reason for writing this supposedly autobiographical summary, we can hear in the final two Largos an underlying nonconformity threatening to overtake us with each turn of phrase. But all of it is just so beautiful that one finds it hard to unlock it as a political document.

Those Largos seem to whisper throughout Musica dolorosa. Penned in 1983 by Latvian composer Pēteris Vasks in memory of his sister, it spins from indubitable threads a tapestry to be viewed, experienced, and understood. Though it manifests itself with Shostokovichian pathos, its structures feel relatively smooth to the touch. And when the quietude is at last overtaken by an outpouring of grief, pizzicato accents mark the tempo like an aural tic chipping away at a world that could dispense with life so readily. As the orchestra subsides, violas scrape the edges like tears. This piece does for grief what Erki Sven-Tüür’s Passion does for its eponym.

Alfred Schnittke’s String Trio brings the transcription instinct full circle. Arranged for orchestra in 1987 by Yuri Bashmet as Trio Sonata, it is both the longest piece on the album and the one in least need of commentary. Like Schnittke’s quartets, the trio opens itself up to moments of grandeur, but quickly undermines them with mournful denouements. Proof positive that, despite the expansion that an orchestral arrangement engenders, the music becomes no less introspective and no less intimate, and perhaps delves even deeper into the solitude of its creation.

Shostokovich noted that his eighth quartet, while openly bearing dedication to all victims of fascism, was in fact about himself, about the death of his ideological self after having undergone such intense social pressure to join the Communist party. Yet if we take a quiet walk between the lines of that history, we find a landscape populated with staves and notes like countless others before or since. Our assumptions about Shostakovich as the victim of a sensitive political milieu often color the ways in which we perceive his music, which is perhaps the point: to read is to experience. There is, however, a danger here. One the one hand, hardship in the lives of any of these composers, much less of any others, can hardly be denied. On the other, the music is its own space, which though its attempts to grapple with something in art that cannot be safely engaged in life breathes into our souls without mitigation. In the end, there only the beginning.