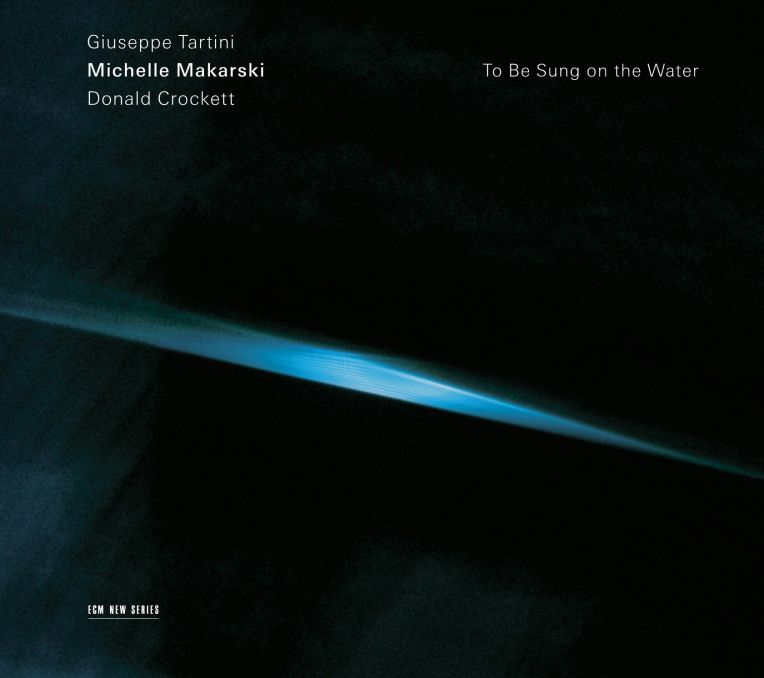 Michelle Makarski
To Be Sung on the Water

Like the blade of light on the album’s cover, Michelle Makarski draws luminescence through the darkness with her bow. For her third ECM recital disc, the violinist further hones both her craft and her sense of programming, constructing a Jacob’s ladder of Giuseppe Tartini and American composer Donald Crockett, the latter of whom offers two works in Makarski’s honor. Of these is the album’s 1988 title work, for which she is joined by violist Ronald Copes. Its lush double stops create a virtual quartet. From these arise steady pulses, slowly lobbed between the two instruments. Even as the narrative fragments midway through, the other always picks up the action in one, as if looking in a mirror that shows the distant past. Open strings prevail in this meeting of voice and translucent surface, a conversation between opacity of the instrument and transparency of the voice.

Hugging this piece are two sonatas by Tartini. The Sonata IX in A Major achieves an intimacy on par with Bach’s solo works. Yet where Bach inscribes the waking world with his solitary thoughts, Tartini crams that same world into the depths of his dreams in order to salvage what might otherwise remain unseen. The inaugural Largo sways with the same flexibility, as might a dream in which the parameters of one’s immediate reality are just as indecipherable as those beyond it. This renders the Allegro that follows a negation of self. Hence the echoes in the third movement, softer in the anchored line of the double stop, weaving its way like a caduceus into the frantic trills of the final proclamation. With its ponderous dissonances and looming double stops, the first strains of the Sonata II in d minor sound closest to Crockett. And while the middle movement is far more exuberant, filled with dancing diversions, the final Allegro marks a sinuous organism, its lines curling like fingers beckoning from behind a curtain.

All of this makes of Crockett’s mickey finn (1996) an urgent crawl to a bygone era, a literary and geographic aside wrenched from the ether with reluctant precision. Crockett’s tantalizing grasp of language makes for a delectable passage into Tartini’s  Sonata XIII in b minor. Makarski articulates the ground lines most strongly here, drawing them out to allow their resonance to overtake the lead. This is clearest in the stunning Andante, which finds its second self reinvigorated in the arousing Giga.

These works by Tartini, despite their bare construction, ask of the musician a certain depth of expression that Makarski handles with intuitive linearity. The music of Crockett similarly draws out the violin’s potential as songstress, shedding the husk of programmatic arbitrariness in favor of direct communication. Both write music without masks, and both are given the ideal mouthpiece in a violinist whose touch is supreme.