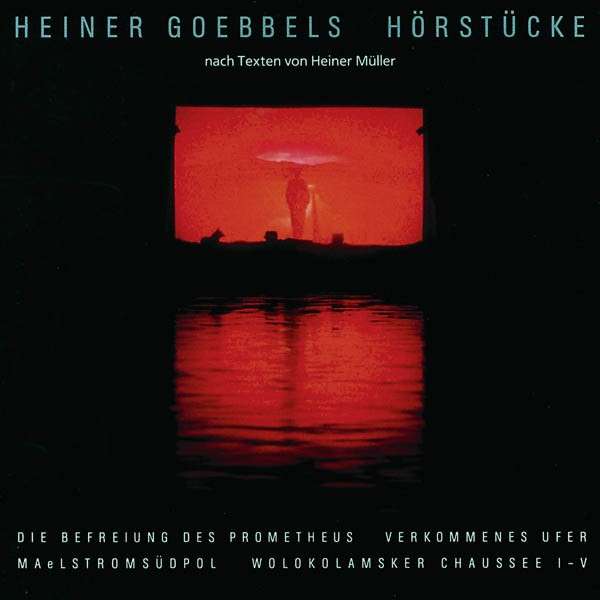 My respect for Heiner Goebbels only increases with each work I encounter. Yet while his art, not least through frequent collaborations with linguistic wizard Heiner Müller, has always had its heart in drama, from this collection of radio plays that drama emerges—in the wake of German reunification, no less—with a fresh, genuine voice.

The first of this massive collection’s four plays, Die Befreiung des Prometheus (The Liberation of Prometheus), will sound familiar to those who’ve followed Goebbels in chronological order, for its themes had already made an appearance on Herakles 2 two years before. Both are based on a chunk of text from Müller’s Cement, only here we actually come to know that text amid a filmic montage of others. This process of splicing places, spaces, and times for new mythology will be familiar to any Goebbels listener, but it rings more intensely than ever. From the opening nod to Laurie Andersen we feel right at home. Like her Superman, Müller’s Prometheus is deconstructed from the inside out. Rather than carrying the flame of knowledge, he roasts over that flame his own sustenance at the gods’ table, where he is doomed to eat himself in an eternal circle of hunger and release. Though freed by Heracles, he is plagued by a waning remembrance of godliness, chewed and spat by the rock of the earth. Where Goebbels excels is that, in setting all of this, he manages to evoke a wealth of environmental details that his mosaic of voices can only hint at. Through the bubbling crude of his electronic interventions, he unpacks intimations of the zeitgeist with enviable intelligibility. Incidental sounds turn and tumble, grasping at the enamel-hidden scraps of mastication in hopes of picking off a morsel, ending up instead with a fist full of weeds, and it is these we must weave into a basket if we are ever to catch a sense of things. Metallic edges, heavily serrated and rusted over with time, melt in our gaze. Goebbels marks these rhythms with clips and starts. Snatches of the everyday butt up against unpredictable and sometimes-confrontational turns, but always with a uniquely organic energy.

Verkommenes Ufer (Despoiled Shore) takes its seed from an early (1955) play by Müller. For this project, Thorsten Becker asked fifty strangers in Berlin to read the text in question, thus yielding the raw material for Goebbels’s subsequent mash-up. Because none of the readers were familiar with the text, their renderings bring out inner truths. What begins as a writhing and inarticulate being in the final product resolves itself into a landscape of hesitations, loops, and, above all, porous communication. The Argonaut’s promise kisses the face of chance too many times, leaving only the corpses of a onetime progeny swinging in the wind of manipulation. Poison seeps through the ground in reverse, seeking out those vials from which it was poured, but finding only the fullness of adolescent laughter wafting across the urban sprawl. A masterstroke in the Goebbels/Müller canon.

The album’s cover photo is taken from its third play, MAeLSTROMSÜDPOL (MAeLSTROMSOUTHPOLE). If its blood-red wash of solitude is any indication, we might easily know its fascination with reality and disconnect before a single word grabs us. The continuity of the text, inspired by Edgar Allan Poe’s The Narrative of A. Gordon Pym, is its own contradiction, carving out of those syllables a subterranean world. Speech stores hidden desires in its vowels, misted by white noise and the song of an open cataract: drones and queens, reeds and marshes, all blended into a smoothie only a ghost might drink. It is a photograph that grows blurrier the more it develops. The only way to discern it is to drink the vat of chemicals that brought it to visible life. Echoes turn into birds, the shimmering backdrop of an open mike emceed by the mistress of our deepest nightmares. “OH KEEP THE DOG,” she croons, as if to cut the running line that binds us to everything. She overwhelms us with the responsibilities of liberation.

Last is Wolokolamsker Chaussee (Volokolamsk Highway). Based largely on motives from writers Alexander Bek and Anna Seghers, this self-reflective look at social change in the DDR’s last gasps is vitriolic through and through. Part I, “Russian gambit,” introduces the voice of stage actor Ernst Stötzner and music by heavy metal band Megolomaniax. The combination is a fortuitous one, for the sheer theatricality of the language almost screams for these experienced thespians of two not-so-different stages (though, as Verkommenes shows, this needn’t be so across the board). Bloodshed and total recall dance with one another, spinning their way to “Forest near Moscow.” Stötzner continues his tirade, only now with gentler guitar accompaniment. Death still looms in every pregnant pause, given just enough room to spread a pair of wings which, though flightless, can at least move enough to remember flight. Some preparatory shuffling in Part III, “The Duel,” opens a 20-minute call and response between Stötzner and men’s choir, all of whom join lungs to blow the dust off the mood of German Arbeiterlieder. Behind the scenes, the musc underscores an important truth: namely, that no matter how robust we spin our sentiments regarding human existence on paper, they would all burst into ashen death at the touch of a match. Part IV, “Centaurs” (the title of which, a booklet note reminds us, comes from the Old Greek for “red tape”), recasts Kafka’s Gregor Samsa in a world ordered by totalitarianism, a theme finds blatant traction in a recycling of Shostakovich’s (in)famous Symphony No. 7. The narrative is even more localized in the mouth, which bites a desk in order to prevent its screams from tearing out the still-beating heart of resistance. The fifth and final part, “The Foundling” (after Kleist), is perhaps the most unusual, if only for being backed by hip-hop group We Wear The Crown. Stötzner’s “rapping” is a mélange of generic signatures that transcends its surroundings even as it relies wholly on them. In this prison of madmen speaking in “MARXANDENGELSTONGUES” there is only room for forgetting.

German speakers and/or those up on their German history (I can count myself among neither) will surely get the most out of this recording whose booklet forgoes translating every word (especially in Prometheus)—a real shame considering the parodic depths awaiting our swan dive of relish. The language is visceral in the deepest sense, at times vulgar but always self-aware. Completists wanting the most unfettered glimpse into the architecture of Goebbels’s craft would do well to track down this invaluable set. Though the sentiments throughout are as complex as their politics, certain common themes exploit the connections between songs and conflicts. Through songs we can hide in the foxholes of life and cover our heads against any aerial assault, but in the end all of their lyrics flow through us, be they of the enemy, of our mothers, or of ourselves.