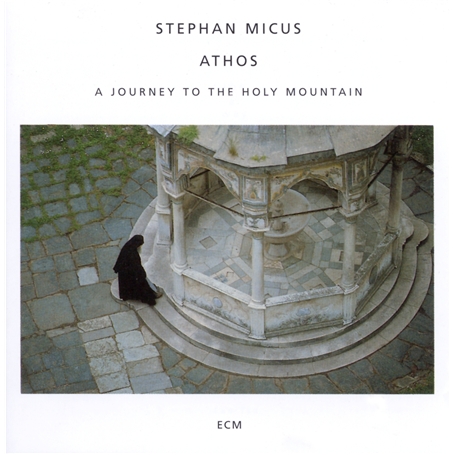 Stephan Micus
Athos: A Journey To The Holy Mountain

If true meditation is not a centering but a shedding of the self into a plane where the ego no longer speaks under the illusion of a proper name, then Stephan Micus has walked some of the most meditative paths on disc. Inspired by a visit to the holy Greek mountain of Athos, his album of the same name bears traces of just such a traveler, one whose artistry sees medium and message as one. Those looking for anything close to the Byzantine chant that surely nourished his ears during this pilgrimage may feel disappointed. Then again, the Micus experience has never been about total re-creation, but rather about the ways in which the lens of his soul refracts all it comes in contact with during its itinerancy.

Athos takes a diurnal structure, with days marked by flutes of varying origins and nights woven in 22-part choruses, all sung by a multi-tracked Micus. The latter serve as touchstones in the fullness of his narrative, which takes its histrionic steps in voices mineral, unaffected, spun from the wood, clay, and strings of another time and place. In these drones is where the true indeterminacy of life takes shape, shifting from circle to ellipse and back again like a full moon stared at for too long. “The First Day,” a shakuhachi solo, rests on a sibilant edge and awakens like an animal from winter slumber, even as it cranes its neck, heron-like, back toward memory, now hazed by the passage of the seasons. “The Second Day” hangs a suling (Indonesian bamboo flute) above a garden of flowerpots. And in “The Third Day” Micus offers a ney solo, wavering like a reflection across molten rock and shaped by the lips of a divine glassblower who fashions from it a teardrop in the cosmos, forever crystalline and unshattered. Such music turns the sun inside out and shows us that its heart is nothing but shadow, for otherwise it would never know the generative power of fire.

This cosmic passage is bookended by a prologue and epilogue. “On The Way” pairs cascades of Bavarian zither with the tinny laments of sattar (long-necked bowed instrument of the Uyghur people). In its depths we weep at the fallacy of what we have created, but know that within the distorted memories of those tears lies something far more meaningful: constant change. This and more we hear in these moments, in the total dedication that engenders them. “On The Way Back” pulls those evening voices from the clothing of their afterlife, vibrating like a reed in the core of something devoid of song.

Athos is the diary of a sacred space whose pages are born in the siren that calls everyone into the stillness of eternity. It tugs your heart until it merges with Micus’s own, so attuned is his playing to the spirit of all that moves us to listen. He reaches through the veil of distance holding a broken watch, asking us to breathe time back into its silent circle.