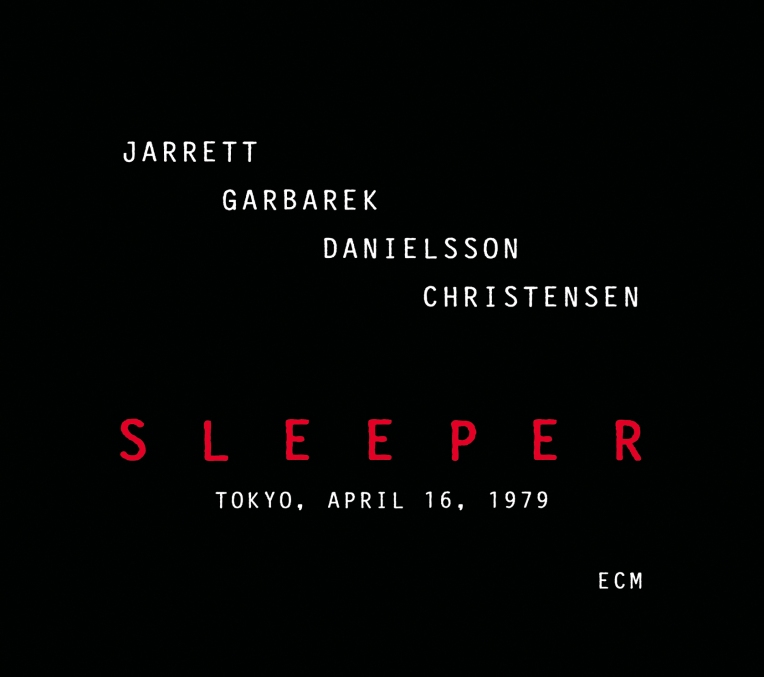 Keith Jarrett’s European quartet—with Scandinavian cohorts Jan Garbarek of the reeds, Palle Danielsson of the strings, and Jon Christensen of the sticks—was the missing link to his trio endeavors with Gary Peacock and Jack DeJohnette, finding a happy medium between the latter’s standards-based approach and his marathon improvised performances alone at the keyboard. The quartet boasted not only fine technique and dovetailed sense of timing, but also the fruit of its leader’s compositional labors during a period of career-defining development. Representing the pinnacle of five sporadic years, Sleeper documents a 1979 Tokyo show from the same tour that brought us Personal Mountains. That very tune kicks off this set of amethyst originals, Jarrett and Garbarek comprising the perfect hand-tooled leather for D&C’s riffling pages. Their Niagara pulse splashes this April canvas with blistering watercolor, Garbarek close behind as he leads us by the ear into “Innocence.” For this he adopts a folkish quality against support so synchronous, it’s as if it were responding to something as elemental as wind. And Jarrett likewise, as he pours on the syrup of “So Tender.” This unexpected travelogue proceeds at an inviting clip and features resplendent emoting from Jarrett, who manages to brighten even Christensen’s characteristic glitter. Garbarek both shouts and whispers, riding a wave so robust that every lick feels thematic while also trembling at the threshold of Jarrett’s spontaneous pulchritude. So do we proceed, funneling romance into an “Oasis” that can only be filled by a lifetime of love for music. The nearly half-hour take given here is reason enough to celebrate this record. From the opening Spirits-like incantations, infused with wooden flute and gamelan-like percussion, to the uplifting procession with which they end, Garbarek and Jarrett draw shades of gut-wrenching intensity. Despite its length, this track walks an intimate, ritualistic space. Majestic without being magisterial, it touches us like the energy that sustains it and flavors the waters of its namesake with the promise of restoration. “Chant Of The Soil” locks early and doesn’t let go. Bass and drums work like dolphins to keep us from drowning, enlivening Garbarek’s soulful phrasing with conviction, while “Prism” (another highlight from Personal Mountains) finds itself resurrected here in flowing dialogue before the invigorating circle of “New Dance” gives fresh meaning to the encore.

If ever it were possible for a recording to be even more alive than the day it was laid down, this is it—such is the value of its release. In addition to the symbiotic rhythm section, Garbarek naysayers may find themselves knocked on their rears by the exuberant, life-affirming themes issuing from his bell, each fitting snugly in Jarrett’s pianistic relief. A classic before it ever hit the shelves, Sleeper may just be the ECM event of the year and is, as its title implies, a dream to hear at long last.