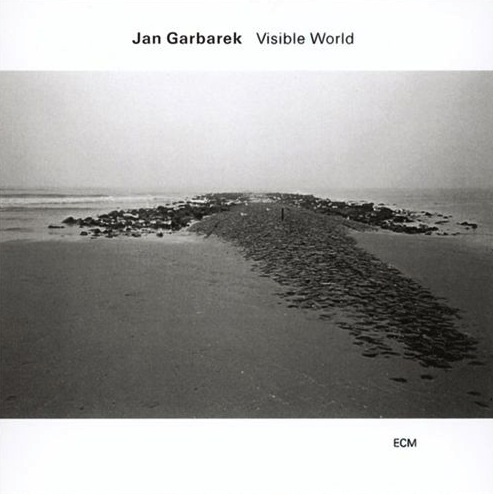 As one who started out with ECM’s New Series and only years later began branching out into ECM proper, how can I ever forget my first parent label experience: Visible World. Having heard Jan Garbarek only on Officium, I was curious to see what the saxophonist had to offer and was lucky enough to spot this disc in a used CD bin. The cover photograph pulled me in…yet how much more so when I pressed PLAY and let the waterwheel flow of “Red Wind” wash over me. Here was an artist, I now knew, who felt the deserts in the rains and vice versa, one who turned every lilting ornament into a ritual gesture. From the quiet strength of his themes and non-invasive synthesizer touches to the feathered synergy of his band mates, songs like “The Creek” gifted experiences from another life. And songs is exactly what these are, for in their precious adlibbing form crystals of hope, catching the drum-shocked catharsis of “The Survivor” on bassist Eberhard Weber’s thrumming comet tails like sunbeams in a prism. While Garbarek’s tribalism may ring a touch ingenuous to some folks, the maps of his travels come cased in loving care, so that no creases ever turn into tears. Take, for instance, the vivid skin Garbarek stretches over the skeleton of “The Healing Smoke.” By turns robust and willowy, it never backs down from its convictions, lays them bare for our scrutiny, if not also for the blindness of our souls. Pianist Rainer Brüninghaus makes a welcome return to the Garbarek fold, bringing his trademark touch to journeys over three “Desolate Mountains” and the moving portrait of one “Giulietta,” even as percussionists Marilyn Mazur and Manu Katché lay runes along the way. The cinematic bliss of the two-part title track, one scuro to the other’s chiaro, reminds us that much of the music featured on Visible World was written for video or film. Other moving pictures include a gorgeous, I daresay funky, rendition of “Pygmy Lullaby” (which I, like many I’m sure, first encountered through Deep Forest’s classic unearthing) and “The Arrow,” an evocative landscape of melodic steles and natural wonder. Yet all of this is just the smoke to the fire of “Evening Land.” Said saga of sound and sentiment blows like the exhalations of feature vocalist Mari Boine, who pulls up the calls leading up to this point on threads spun from Garbarek’s crescent-moon commentary, culminating in a seesawing of chords around which tumble the children of tomorrow.

This is the quintessential Garbarek album, the perfect synthesis of everything he and producer Manfred Eicher ever set out to achieve together from the start. Being the sculptors that they are, both artists saw the finished form in the slab, leaving us with a masterpiece we would never have known without their intervention.