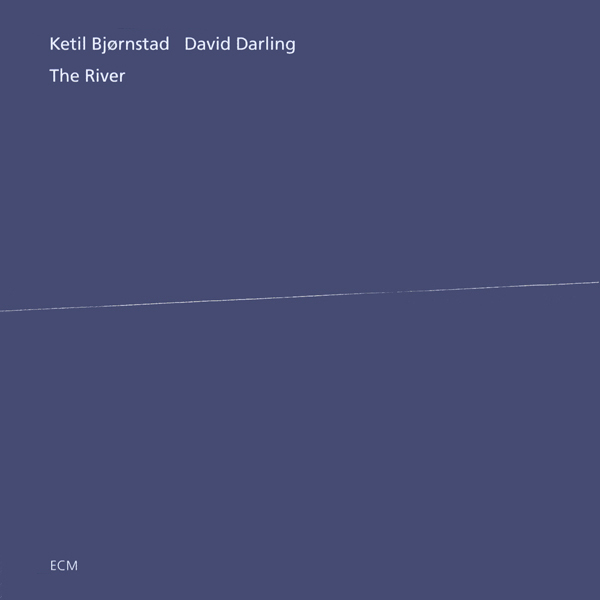 If ever there was a seed beating like a shaded heart in The Sea, it was the twined musical filaments of Ketil Bjørnstad and David Darling. The Norwegian pianist and American cellist spoke on that session like siblings, at points giving us a foretaste of the droning flavors we encounter at the edge of The River. The size and scope of the water have changed in name only, for here is the former’s other half, spreading its finger paint across twelve parallel sections. If we note anything different this time around, it’s that the horizon feels so close that we could just close our eyes and reach out and there would be the sun.

Bjørnstad’s love of aquatic themes stretches an ideal surface tension across which Darling may unfurl his sails. The delicate ostinato of one becomes the leviathan drone of the other, drawing threads through opaque expanse (just as Swiss-born artist Mayo Bucher has placed a white edge through this and select other ECM cover paintings). As cello keens and trembles through a pianistic hall of mirrors, it ladles shadow from the wells of solitude in which we all take shape before birth and to which we also return, lowered in buckets of light. So is The River as much about earth as it is about water, impossible to separate from the glitter of mineral deposits that marks its flow. Darling may paint the air as a salmon through the current, but he is also keenly aware of the sediment kicked up by his journey, of the molecular oneness that binds. Lost to the gazes of two figures crouched at the banks, lowering offering memories to an open fan of moonlight, he swims on.

These are pieces of subtle virtuosity, timbre, and emotional integrity, utterly devoid of self-interest. Their flowering symmetry is a living palindrome of surrender that shuns the pleasures of its philosophies in favor of feeling for its own sake. Though overwhelming at times, there is never a possibility of drowning when water is your air. In this reverie there can be no reveries, for the world is already a dream.