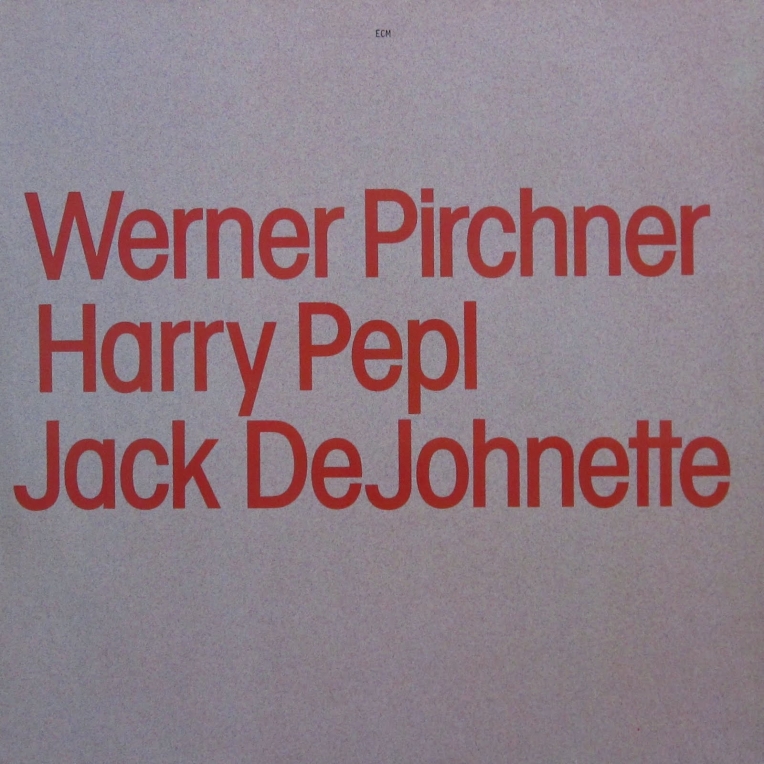 Writing these reviews has been as much an opportunity to learn about the many fascinations of ECM (and music in general) as about myself. Part of that learning process involves reassessment. So far in my explorations of the label, there have been only two bumps in the road—no small feat for a catalogue of 1300 releases. One of these bumps was the self-titled record cut by Werner Pirchner, Harry Pepl, and Jack DeJohnette. Recorded on a Sunday afternoon in June of 1982, it came across to my ears as a one-off session that was perhaps better suited to remain in reissue limbo. Yet after posting a rare critical review, I incurred an unexpected backlash. Rather than let this underscore my defensiveness—which is useless, for how can one argue with another’s appreciation of art?—I took it to heart and have, over the past year, returned to this album on occasion to absorb its expressive secrets. The experience also revealed an imperfection in my system: because I am hearing so many of these records for the first time, and in my sometimes-overzealous efforts to reach synchronicity with ECM’s rigorous release schedule, I tend listen to albums only once before reviewing them. While on the one hand this gives (I hope) a freshness of feeling to my attempts at describing the indescribable, on the other it doesn’t always leave me prepared to expound upon an experience that may be a longer time in coming. I am also an ardent, if idealistic, believer that music tends to come into one’s life when it is meant to, but that sometimes its interest requires incubation. I simply did not give this date the attention it deserves.

“African Godchild” opens its eyes to a savannah dawn and draws us into a scene resonant with life. The depth of Pepl’s talent, now that I’m more familiar with it, is immediately evident in the spaciousness of his evocations. Pirchner matches that spaciousness on the inside, so that our understanding of it becomes unified. We can hear from this that the Pepl/Pirchner relationship is the nexus of the trio, the guitarist providing spider webs of support for the mallet man’s acute inscriptions. DeJohnette’s kick drum and cymbals add relief to their subtle crosstalk. The interrelatedness of foreground and background is deftly realized, especially as Pepl steps forth with an echoing solo, sculpting the drama with practiced fingers. “Air, Love And Vitamines” is perfect for an autumn afternoon. It is a prime vehicle for Pirchner, whose Jarrett-like inflections enchant at every turn and constitute the vertical to DeJohnette’s horizontal. The drummer balances the hidden urgency of this tune and blends seamlessly with Pirchner’s chording. After listless beginnings, “Good-bye, Baby Post” Pirchner leads the way into a resonant groove. Pepl acts the bass player’s part, even more so in his solo, before pinpointing the night with far-reaching flame in “Better Times In Sight,” for which Pirchner brings us back to earth but not to land, preferring as he does to skate the limpid waters of a forgotten sea.

I stand by my original opinion that the processing on Pepl’s instrument obscures what is already such a direct voice (compare this to the more organic buzzing of Pirchner’s marimba), yet I can understand the motivation for contrast. Ultimately, his gorgeous sustains and crunchy backing ring true in spite of the effects applied. And while I still think the recording levels could still use some tweaking, I have found a solution: listen to it loud.

This curious little gem may or may not hold you at first listen, but it does have the potential, like anything worth its salt, to endear as it endures.

One thought on “A second look: Pirchner/Pepl/DeJohnette (ECM 1237)”