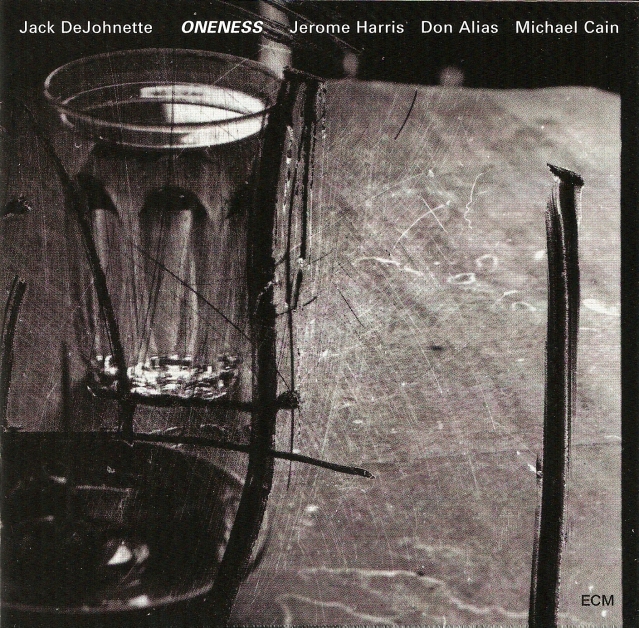 It’s safe to say that drummer Jack DeJohnette has not only changed the face of modern jazz, but has long been one of its greatest physiognomers. While his earlier and more eclectically minded Special Edition has received due (re-)recognition with an Old & New Masters box of its own, be sure to follow its trajectory to the Oneness of both group name and album title. Fellow percussionist Don Alias fleshes out DeJohnette’s already rich sound, joining Michael Cain, whose lyrical pianism graces his own leader date for ECM, Circa, and bassist Jerome Harris, whose collaborations with Sonny Rollins (through which he first met DeJohnette), Bill Frisell, and George Russell have lent a likeminded universalism to his sound.

The percussion-only “Welcome Blessing” says it all: here, in the heart of music-making, lies an empty floor just waiting for the kaleidoscopic patter of feet and light to make its creaks and imperfections known. These are the spaces that seem to fascinate DeJohnette, who makes of each a full-handed gesture. The brevity of this blessing is also its message: that, in a world where freedom of speech runs rampant, sometimes the shortest statement is the strongest. At the other end of the spectrum is “From The Heart / C.M.A.” This nearly half-hour diptych closes the album with an album, and proves that even the broadest sentiments can have the simplest philosophy. Carrying over some of the delicacies of preceding tracks while also blending the protracted testimonials more familiar to a Keith Jarrett session, Cain’s jigsawed pianism undoubtedly draws influence from DeJohnette’s longtime band mate in characteristic progression from a low, earthy drawl to sparkling dandelions of exposition. If there is oneness to be had, it is here in DeJohnette’s mind-meld with Harris, each providing as much rhythm as melody. The surprise entrance of acoustic bass guitar lends tactile flavor.

In the liminal tracks, we find ourselves first “Free Above Sea.” Evanescent and hopeful, DeJohnette’s steadiness here insures that the roiling pianism finds its path. The free-flowing “Priestesses Of The Mist” reveals the heartbeat of DeJohnette’s craft. It begins with a whisper, a wind, a sweep of the minute hand. The pianism is ever so fragile here, moving weaver’s hands through strings as invisible as they are audible. “Jack In” is a smoother train, gliding along tracks of felt-lined hand drums and cymbals. Cain soars, open-throated, and inspires the album’s grooviest passages, especially in Harris’s picking.

A free and easy session that is equally comforting to listen to, Oneness makes no demands. It is a calm breeze flowing within and a huge step in the progression of DeJohnette’s sound, for it is he who maintains the most color and downright melodic sensibilities. He is the music’s conscience. Thus defined, each piece billows like tattered cloth with stories to tell, histories emanating from every fray.

This is one of DeJohnette’s most personal. You can feel it.