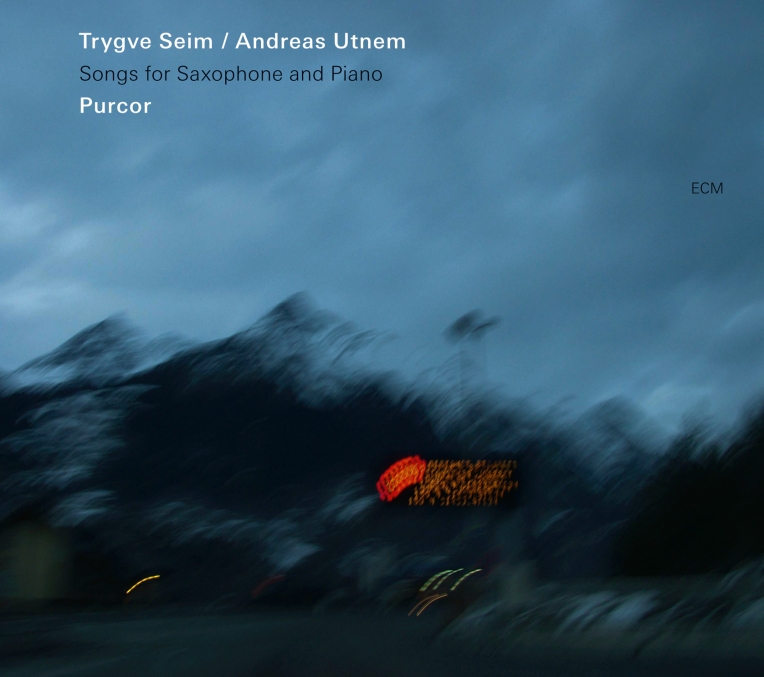 After a 13-year odyssey of collaboration, the duo of saxophonist Trygve Seim and keyboardist Andreas Utnem at last plays under ECM’s microphones in Purcor. Dubbed “Songs for Saxophone and Piano,”  Utnem calls more rightly calls it a program of “improvised church music.” In 1997, Utnem, a practicing liturgical composer, invited Seim to participate in select services under the auspices of Norway’s Church City Mission foundation. The result was a relationship that persisted and which manifests an intimate knowledge of context and practice in this session of 14 pieces that include settings of the Mass Ordinary, music for the stage, improvisations, and a reimagining of “Bhavana,” originally of Seim’s Different Rivers.

A beautiful and intimate album that belongs right alongside Stella Malu, Purcor strains its sentiments through a reductive mesh that distills only the purest extract of each melody. Seim’s breathy tone carries experience in its pockets, which it drops in methodical, dripping handfuls in the opening “Kyrie.” Feathered like the edge of an avian dream, it lisps at the edge of a time when mouths wandered in search of tongues. The album’s splintered Mass is therefore less a structural element than it is the air that gives said structure meaning to begin with. It is the space it inhabits, the climate from which it shelters its inhabitants, the words spoken in its chambers. From the beautiful counterpoint of the “Credo,” through the John Surman-esque sopranism of the jubilant “Gloria,” and on to the heartwarming gentility of cause in the “Agnus Dei,” the duo establishes a devotional yet ecumenical atmosphere, a shroud that reaches forth like arms of light and wraps its sacred conscience around secular means. A “Responsorium” switches piano for harmonium, lending the feeling of an organ hymn. Along with the “Pater Noster,” it is a reflecting pool of the soul whose contemplation is naked before all in Heaven. Such are the wounds that give weight to the meaning of struggle—not threads but veins: vast internal networks, compact and held together by the skin of the Word.

One almost hears the bending of a bass note at the start of “Nu Seglar Vi Inn,” a whalebone of time stretched to its snapping point. The album’s folk roots are first fleshed here, though nowhere so deeply as in the “Praeludium,” which untangles those roots and partakes of the celebratory nectar that flows through them. Likewise in the “Postludium,” for which Seim elicits a bamboo sound from his instrument, a specter of the earth walking toward a horizon aflame. The album ends on a likeminded note with “Når Mitt Øye Trett Av Møye,” laying us like lanterns on the water and splashing us into dusk.

Intensities of contrast abound, moving from whisper to exultation in a few sweeps of a grandfather clock’s second hand. Seim and Utnem’s playing, more akin to painting than to performing, blurs color as if by brush of dream. Like the title track, the program as a whole is a fleeting, primordial lament, a fusion tears into laughter, diamonds into coal, coal into dust, and dust into prayer.

From cover to engineering to sequencing (note especially the placement of the solo harmonium “Solrenning”), this is a quintessential ECM production.