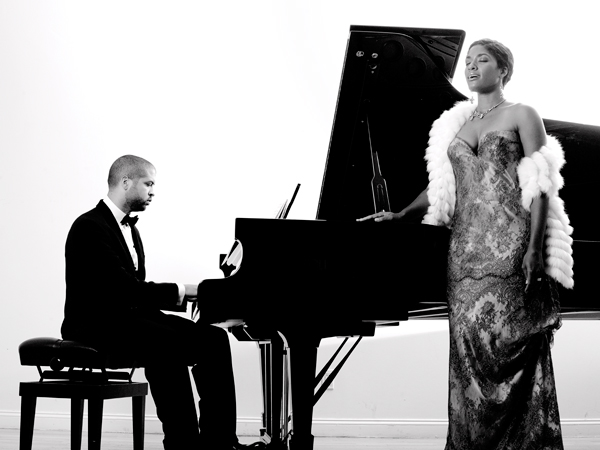 In January of 2012, pianist Jason Moran and his wife, mezzo-soprano Alicia Hall Moran, were slated to perform on Cornell University’s intimate Barnes Hall stage. A Broadway gig prevented Alicia from being able to appear and bassist Dave Holland was kind enough to substitute. The result was an unforgettable evening of music. Yet I always wondered what spells the original billing might have cast. At last, some 15 months later, that magic was realized. There was something about the way that Jason opened with his solo rendition of Fats Waller’s “Honeysuckle Rose” that assured us we were in for something special. His flourishes were straight from the heart, not the least bit rhetorical. He took those classic threads and re-spun them: same colors, different weave. It was the first of a handful of solo pieces, which also included John Scofield’s “Fat Lip” (a jauntier affair, coated in silver and wine) and some original music written for Alonzo King. The latter revealed the gentler side of an artist whose panache lays it all on the table: diamonds, clubs, hearts, and spades. Or maybe it was the way in which Lucille Clifton’s “blessing the boats” tumbled from Alicia’s lips. A poetess in her own right, she took to the platform fully prepared for the power of love in a world riddled with hindrances. Her resonance filled the room, sharing the rafters with spiders’ webs and history. Like Clifton’s timeless words, she manifested a fully embodied style, her pulse audible during sustained notes.

Alicia used these interludes as doorways to personal reflection. Not only because she wrote the melodies, but also because in her was a storyteller whose loom was strung with moonbeams. By the end of the night we knew how she and Jason had met and fallen into oneness, how music had called to them as equals and set their phasers to shine. Their autobiographical transparency cut the fourth wall like butter.

A soulful rendition of a Stevie Wonder classic, endearingly altered as “I Was Made to Love Him,” set off a string of standards. Of these, “My Funny Valentine” stood out for its rasp, traversing a bridge of good fortune into a swinging “Summertime.” Leonard Bernstein’s “Big Stuff” was the icing on an already optimistic cake, boxed and tied with a bow.

may you open your eyes to water water waving forever

Two pieces by Jason from a commissioned suite based on hymns of the quilters at Gee’s Bend, Alabama were the reigning portion of the set. “Here Am I” was downright transcendent, melding supplications into sustained, train-like chords from the keys. “People are more important than things,” Alicia sang, and we could feel that theory made real in practice. This was followed by “You Ain’t Got but One Life to Live, You Better take Your Time,” the notes of which rubbed up against one another as Alicia looked us all in the eye and straight into our hearts. She walked offstage, her voice still carrying before boomeranging back to encore with Duke Ellington’s “I Like the Sunrise.” A glint of light at the end of this long winter, it glowed until we were warmed.

and may you in your innocence sail through this to that

By this point, we had experienced something more than a show. It was a life lesson. Thus spoken and sung for, we carried snatches of post-concert conversation in our pockets out into a maze of streetlights, strung to the gills with joy. Carry on, butterflies, carry on.

One thought on “A Little Bit Wiser: Jason and Alicia Hall Moran”