The Dust of Time is the last film of Theo Angelopoulos, a status it attained only after the Greek filmmaker unexpectedly disappeared from the mortal landscape in 2012. This film was the second in a trilogy begun with The Weeping Meadow and set to be completed by The Other Sea, in production at the time of his passing. It is at once his most complex and simplest film. Because it is his last, we may feel tempted to see it as the capstone to his oeuvre, a summary and reflection of things past. We might also experience it as an inception, a regression into birth.

“Nothing ended. Nothing ever ends.” The voice of our protagonist. As in Ulysses’ Gaze, his name is A (Willem Dafoe), this time a director making a film about his parents’ perseverance in the post-Stalinist era. Sweeping through Italy, Germany, Russia, Kazakhstan, Canada, and the US, its manifold narratives take shape through soft address. A for anonymous. A for atrophy. A for apotheosis. 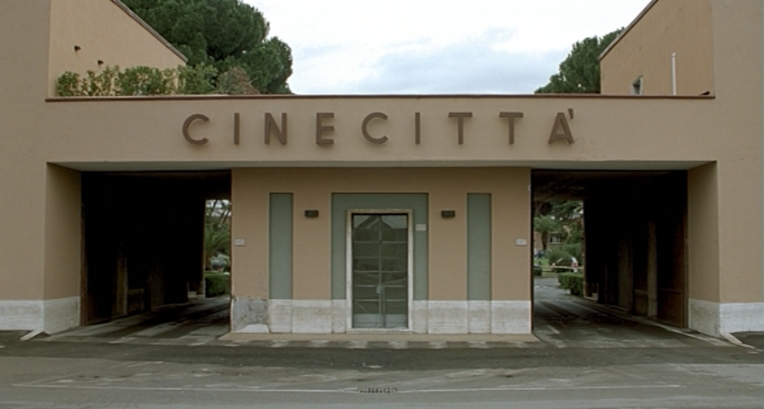 The film works on multiple levels. One finds A in the backwash of the tense politics that so fascinate him. His own film faces logistical difficulties, the weight of which, when combined with that of personal demons, seeks to break him. His anxieties shuffle into level two: his parents’ tale. Here the reality of cinema comes to life, indistinguishable from A’s own.

A clandestine exchange on a train introduces us to his father, Spyros (Michel Piccoli), whose twisting of the system has earned him an identity and the chance to see his beloved again. 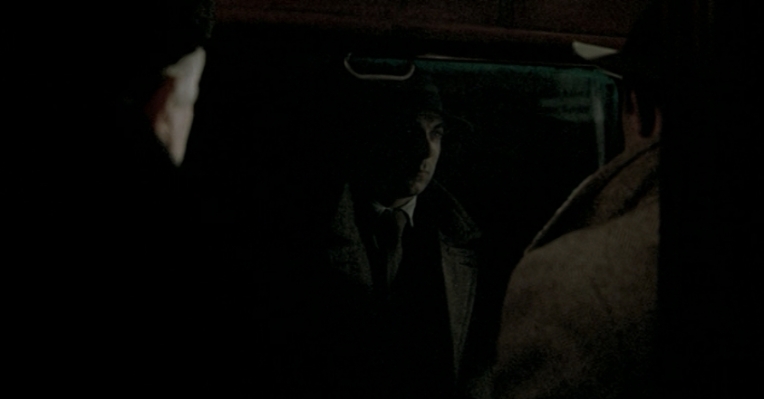 A man hands him a fake passport: “From now on, you’re playing with time.” Words to live by for A in the present, and a clue into the film’s title. Like the coating on old stock, dust plays with the imagery of our experiences in microscopic dances of light and shadow, holds those experiences like a bottle holds wine. As A watches archival footage of communist propaganda, a patch of light covers his eyes like a protective mask.

As in so many moments of what follows, he bleeds into the biography he imagines. Witness in that alternate time his mother, Eleni (Irène Jacob). See the many border crossings etched into her face, the force of her abandon in the arms of the only other human being on her radar.

“It’s you. You’re here,” she says to Spyros, holding him at long last.

At the station, a crowd gathers before a statue of Stalin, disperses, and leaves us dangling in A’s pragmatic concerns.

He surveys the margins of a soundtrack rehearsal, thus enacting one of Angelopoulos’s deepest intertextual sequences. Dafoe cues a melody for a dance in the film (a dance that comes later, in the comfort of water). 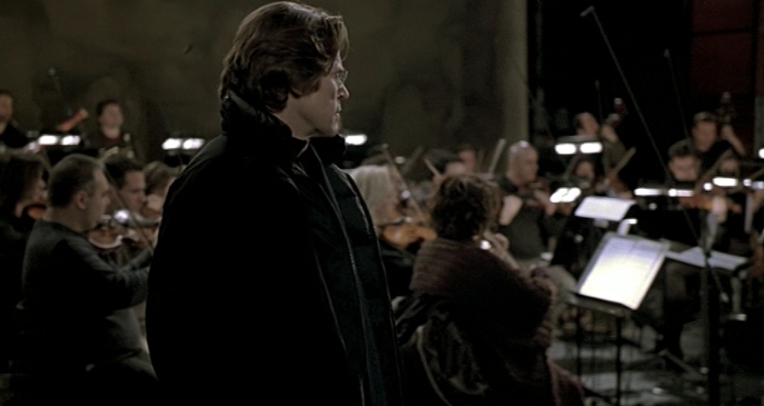 Although I hesitate to compare Angelopoulos to Tarkovsky, I cannot help but see the ringing phone that interrupts the rehearsal as an analogue to the unexpected call that startles the heart of the Zone in Stalker. Dafoe answers it, only to be confronted with voiceless street noise. He hopes it is his daughter, also named Eleni, and fills the studio with her name in vain. He returns home to find his daughter missing, and on her bed his mother’s lost letter to Spyros.

Back in their story, Spyros and Eleni are captured in the wake of their lovemaking, leaving only tire tracks and brokenness to show for their catharsis. 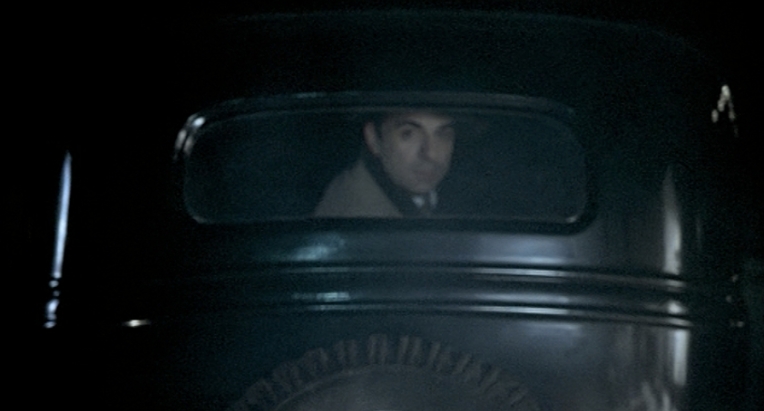 This inspires a series of letters that she knows will never reach him. She flees to Siberia with their son and puts him on a train to Moscow in the winter of 1956. 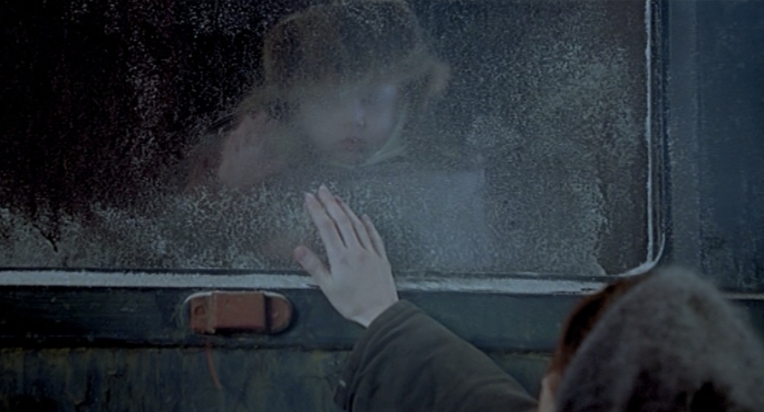 Her heart allows room for Jacob (Bruno Ganz), a man whose head is a museum of broken statues: monuments whose bodies have dilapidated yet whose messages resound. 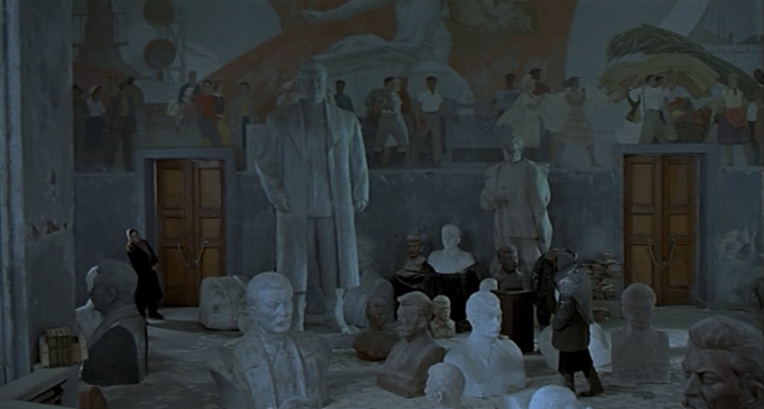 A’s daughter’s room is the physical equivalent. She has plastered her walls with heads of popular culture, each a window into aural upheaval and antidisestablishmentarian politic.

Like the soundscape that wafts in from the streets, they carry echoes of lost music, giving reason to a “strange anticipation” in A’s weary body. Together they are the song of a city greeting the new century. Later A stands before a movie theater, and in that moment realizes that his daughter’s collage is like the cinematic pantheon of which he is but a lost builder. 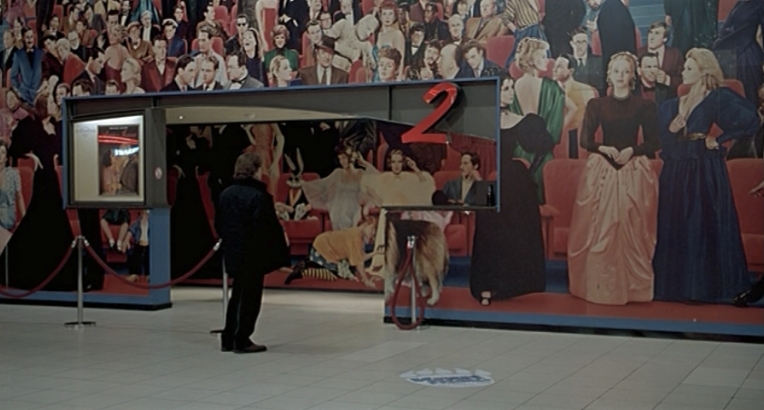 “For me there is no return. My destiny takes me somewhere else,” says Eleni to Jacob. She tells him to let her go, that no matter what happened between them she is someone else’s. Yet Jacob yearns for that return and finds its simulacrum decades later when Eleni and Spyros surprise A with a homecoming. It rings strangely hollow, however, and Jacob arrives in the hopes of reigniting what once so fleetingly was. (In a brief encounter, A admits to him, “I’m constantly traveling. Sometimes I don’t even know where I am.”) Jacob bears his soul to Eleni, invites her to touch the images burned into his mind. The trauma wells up in him. He raises his voice, as if he were onstage. He makes of life a theatre, replays scenes like an obsessed director. 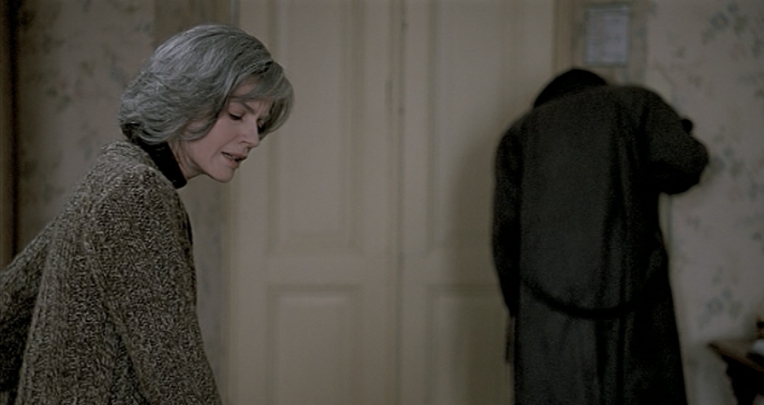 Only with this emotional breach does A gain access to his mother’s youth, finding her in the mist in violent embrace. The camera revolves around them, as would a planet around a sun. 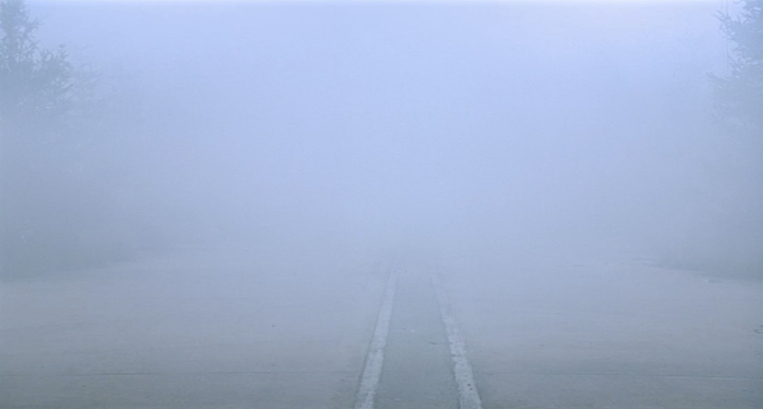 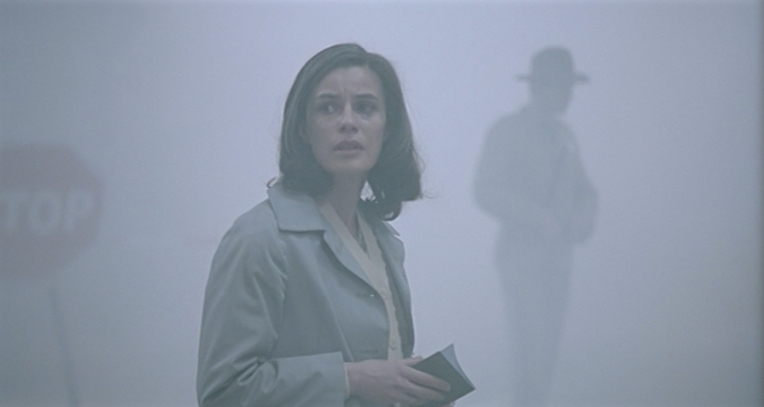 The final blow for him comes when his daughter threatens to end her life. In the presence of vagabonds and police, she gives in to her grandmother’s pleading, unlike Jacob who thereafter implores an invisible God before throwing himself into a river.

In the wake of these tribulations, A shares a ghostly moment, reflected on a passing car that bisects a line of eye contact with his ex-wife, Helga (Christiane Paul).

As Eleni falls ill, her hand drips with water. 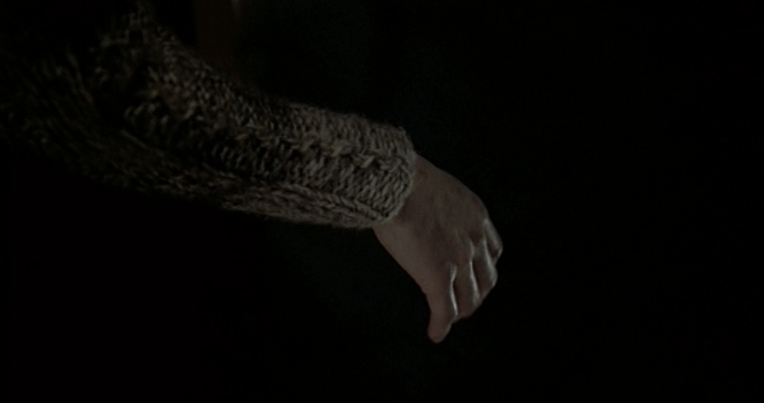 At her deathbed, a great wind floods the room with the exhalations of an impending storm. 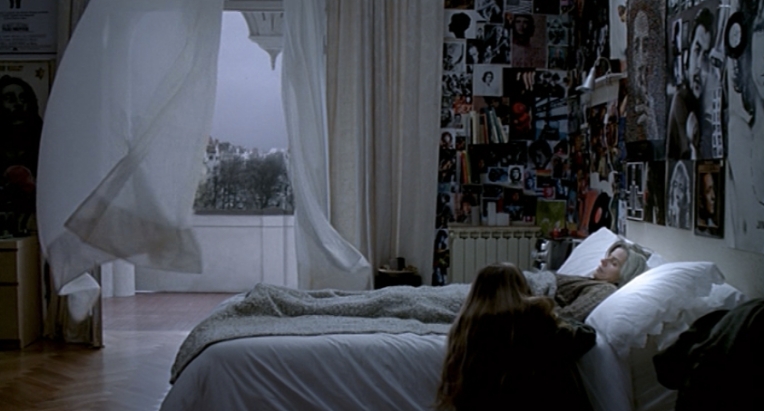 The girl takes his hand instead. It also drips.

Here is where the film manifests a third level: the pliant corridor of death along which our feet will all someday tread. For as young Eleni and her grandfather step out of the window into the falling snow, we feel in their traversal of logical space an openness of reason. Hand in hand, they run through the streets, deserted like the universe. 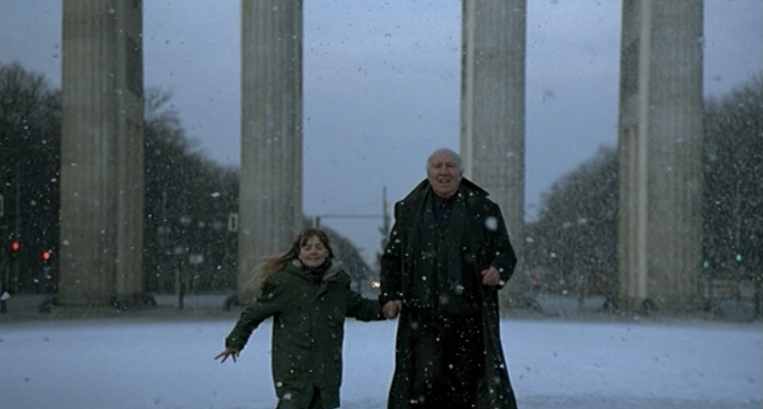 One can hardly discuss this film without noting Angelopoulos’s preference for back shots. Each portraits its respective character more insightfully than any close-up, and in the end shuffles our recollections until they unify.

A particularly moving example, however, is mother Eleni’s hair floating in the mist of her impossible reunion with A.

She is creation incarnate, the bringer of tears where only there is desert. But what is a desert without its sky? That is where the music comes in. 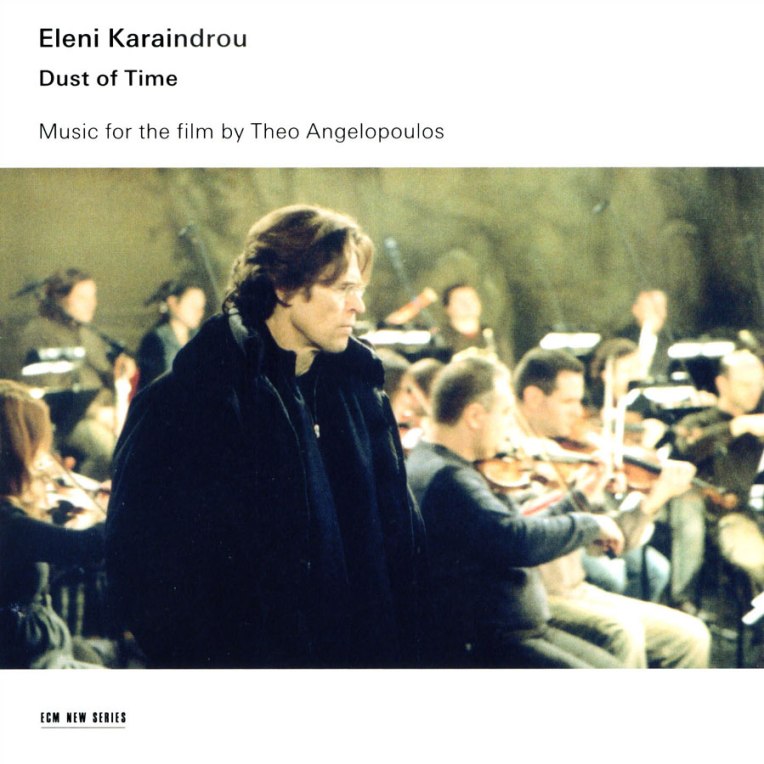 Perhaps more than in any other film, Eleni Karaindrou’s score for Dust of Time wavers in the shadows. “To write the music I had to look for the film’s secret codes,” says Angelopoulos’s trusted composer, “I had to bring the essence of things to the surface and shed intense light on the sound colors underlining the timelessness of nostalgia.” This time the instrumental colors are most intimate, honed to evocative perfection by violinist Sergiu Nastasa, cellist Renato Ripo, and harpist Maria Bildea. Hailing from Romania and Albania, this trio brings its own traditions and nuances to a permeable set of motives. Of these, the “Dance Theme” and its variations figure centrally in both film and soundtrack. It is the music we hear in the pivotal rehearsal scene, homage to Karaindrou’s voicing and intuitive matching. “Waltz by the River” crystallizes the theme’s core values, adding accordionist Dinos Hadjiiordanou into the watercolor mix. As in so many of Angelopoulous’s films, dance animates the passage of time, the degradation of history, and the preservation of memory. Karaindrou’s attention to every movement wipes clean emotional dumping grounds for tragic pasts, purges war-ravaged biographies of their blood in single strokes.

Because the soundtrack’s 45 minutes were culled from over 100 minutes of music, what we encounter is a powerful skeleton. Between the harp and violin duet of “Le Temps Perdu” and the concluding oceanic currents of “Adieu,” Karaindrou figures the power of the melody with as much tact as her arrangements thereof. Along the way, threads unravel to reveal the tumult of wandering and exile in “Seeking,” while passages like “Solitude” speak in monosyllables of enchantment.
Dreams are not beyond us. They return. Like the old reels of A’s interest, they hold their images until the light of waking passes through them anew. Every picture, every note on a staff, is a voyage waiting to begin. 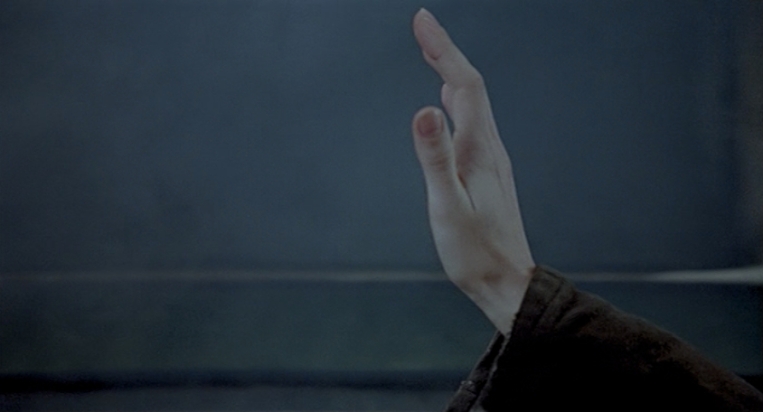