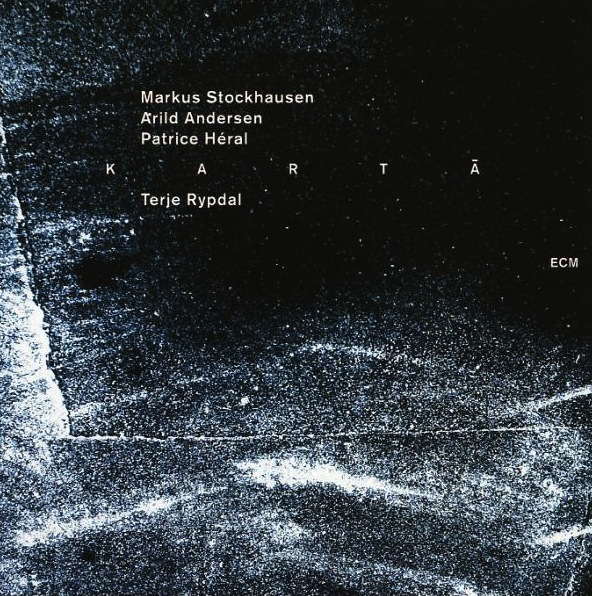 Although the title of Markus Stockhausen’s Kartā is Sanskrit for “higher power,” the music serving it suggests a path of regression from bird to egg. The trumpeter-composer fronts a superb trio that includes Arild Andersen and Patrice Héral (a percussionist whom Andersen characterizes as “a European equivalent to Nana Vasconcelos” and who can also be heard the bassist’s concept album, Electra). Guitarist Terje Rypdal guests, adding swirls of Technicolor to the band’s monochrome. True to collective spirit, much of the pre-arranged material was jettisoned in favor of the spontaneous improvisations that ensued for the recording session’s first ninety minutes. From this came the lion’s share of an 11-part set list. Of the four composed pieces that made the final cut, Andersen and Stockhausen each contributed two.

Looking out from “Legacy” (a sweet breaking of bread that evokes late-night Miles) at the album’s center, one sees Andersen’s pieces at the farthest reaches. Where “Sezopen” allures with its droning cries and floats Rypdal’s autumnal heart murmurs with ease, “Lighthouse” draws powerful arco lines, evoking not the structure itself but the rays of promise it emits and the vessels they rock to sleep. The resulting traction leaves us with a time-lapse photograph to cherish. One layer inward, in either penultimate position, are Stockhausen’s tunes, which between the rubato “Flower Of Now” and the amorphous “Choral” open various doorways of possibility into the ad-libbed nexus.

In said nexus reside creatures of great dexterity (viz: Andersen’s fingerwork in “Wood And Naphta” and Rypdal’s in the fiercely programmatic “Wild Cat”) and natural girth (“Sway”). Yet it is in freer tracks such as “Auma,” “Invocation,” and “Emanation” where the musicians’ sacred touchstones appear. Together they form the weight of a Foucault’s pendulum spun in resourceful filament. At times they reach fevered pitch at the suggestion of Andersen’s ebony ululations, while at others they slip into ghostly blur. Whatever the climate, they hold fast to their timekeeping in constantly shifting clockwork with admirable constancy.

Stockhausen is a player who bathes in outer space, finding freedom in the darkness between the stars. With Kartā he has crumpled a nebula back to its planetary state.