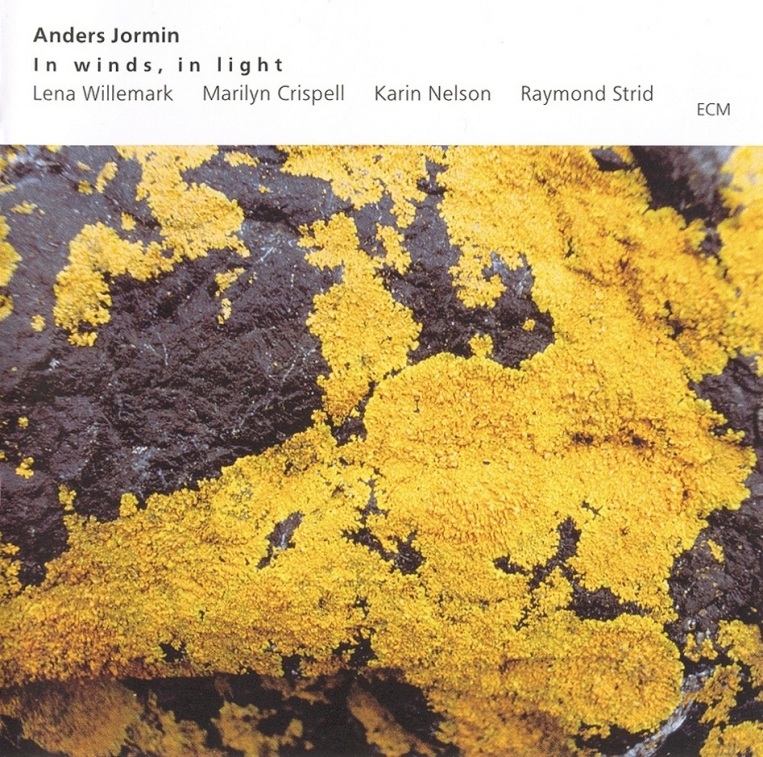 Anders Jormin
In winds, in light

When Anders Jormin was asked to write sacred music for Sweden’s Västerås cathedral, the Swedish bassist went above and beyond, setting verses by Swedish poets Harry Edmund Martinson, Pär Lagerkvist, Johannes Edfelt and Lotta Olsson-Anderberg, as well a smattering of English from William Blake and Jormin himself, in the exploratory cycle In winds, in light. The choice of Lena Willemark to bring those words to life was an obvious one. Having lent her voice to the memorable ECM folk sessions of Nordan and Frifot, here she expands her palette yet again with a unique corpus of source material and sometimes-hallucinatory adlibs. In the latter vein, “Sång 80” finds her in an adventurous mode in some of the album’s starkest territories.  Pianist Marilyn Crispell, organist Karin Nelson, and percussionist Raymond Strid complete the picture.

Although the musicians are no strangers to one another in various combinations in other contexts, here they comprise an ad hoc chamber ensemble like no other. Crispell plays the role of conscience. Whether percussively tracing the periphery of “Choral” or breathing through album highlight “Allt” with vivid involvement, her pianism expresses the complexity of time in simplest language, acupunctured in all the right places. From the other keyboard, Nelson leaps into vast improvisational pools, tracing the arc of her travels in “Flying” to the ashen dip of her “Introitus” in splintered chronology, reaching wondrous peaks of expression with piano and voice in “En gang,” another standout moment. Her organ is a defining presence throughout, at times blasting like a theological furnace, at others whispering secular secrets. Strid, for his part, is the incantation. Hidden and tactile, he fans the flame beneath the snow in “Gryning,” emotes the ritual core of “Each man,” and bows the ether of “Lovesong.” Through it all, Jormin binds with his uniquely textural playing, an approach epitomized in three geologically minded solos: “Sandstone,” “Soapstone,” and “Limestone.” His texts—fitting snugly alongside the literary juggernauts in whose company they find themselves—embody, on the other hand, freeing impulses. The window of “In winds,” for instance, looks out onto a tearful memory, the landscape of which has withered like the soul that once dwelt there and in whose wake is left only a rotted cabin, snow-covered and still.

In winds, in light is giant footprint from the past, filled with the plaster of the present, preserved for the ears of the future. May it flicker still.