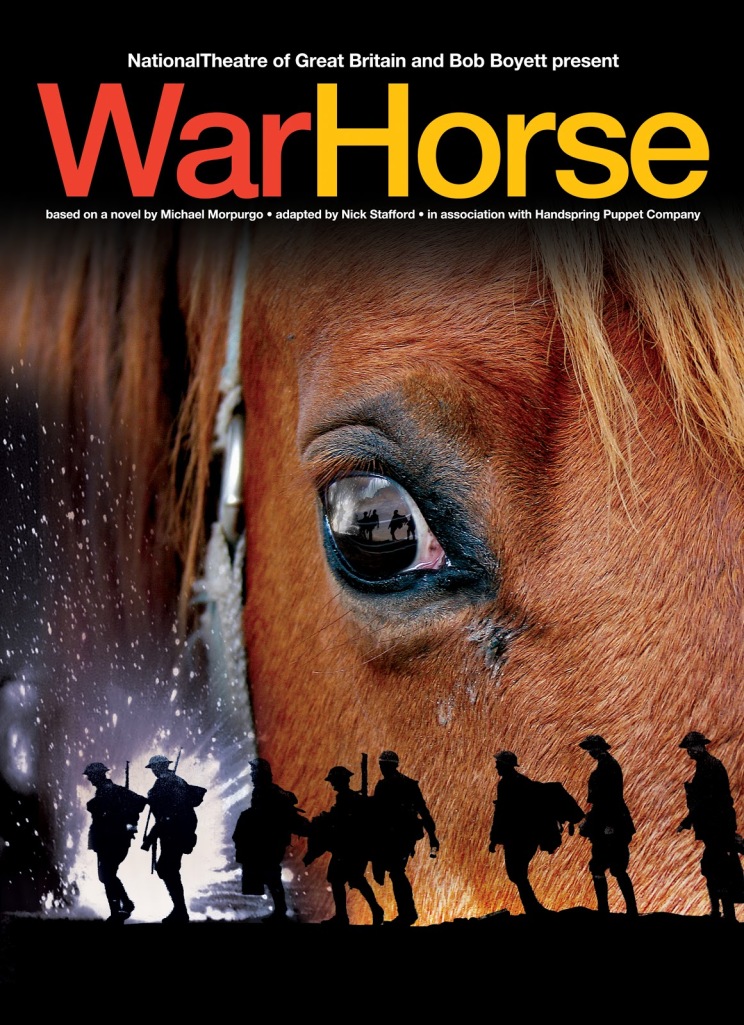 Before War Horse became a Hollywood blockbuster, it began as an internationally successful play. At the center of its popularity was, and famously remains, the phenomenal puppetry which brings the titular horse to life. The result of an intense development process on the part of Cape Town’s Handspring Puppet Company, the War Horse puppets have enchanted theatergoers with their realism and emotional veracity. After several missed opportunities to experience the play in New York City, I was able to see it at last via the London National Theatre’s telecast. While impressed as anyone with its tessellation of story and artistry, I also found myself disturbed.

The following is in no way a critique of the admirable efforts of everyone involved in the London production, nor of author Michael Morpurgo, on whose book the play is based. It is, rather, an attempt to tease out the play’s unwitting reinforcement of anthropomorphism—that ubiquitous psychological malady which places human beings highest on social and evolutionary scales—and its distancing from the animal sentience it nominally seeks to uphold. For while the narrative skeleton is backboned by the horse and his harrowing journey from farmstead to battlefield and back again, the spotlight shines brightest into the heart of the boy who searches for him.

Albert is the son of Rose and Ted Narracott, a family of rural Devon barely making ends meet as World War I looms on the horizon. Father Ted lives up to his reputation as town drunkard when he furiously outbids his brother Arthur for a foal brought to local auction. Ted sees the young horse as nothing more than a trophy of his paltry triumph, and agrees to a bet proposed by his brother: If the horse can learn to plow within a week’s time (a formidable feat, given his hunting pedigree), then Arthur will fork over the auction value as reward. The prospect comes welcomingly to Rose, who is furious at her husband for squandering their mortgage payment on an animal who otherwise serves them little. Meanwhile, Albert has bonded with the horse, who he names Joey. From that moment on the two are linked, heart to heart, their bond secured when Joey wins the bet. Thus his worth, from the beginning, is determined solely by his ability to meet human expectations. It’s a sentiment echoed in the lyrics wafting from an onstage singer’s lips: “Fading away like the stars in the morning…only remembered for what we have done.” It is only humans who will do the memory work required to keep the horse’s valor intact.

Two years later, in 1914, the war has broken. Even as its political machinations foment behind the scenes, anger mounts horses of a different kind in Ted’s mental stable as he prepares to sell Joey to the cavalry for the war effort. Despite Albert’s protestations (“We were born for each other!”), Joey is sold and handed over to James Nicholls, an artistically inclined army major who, by way of introduction, opens the play at his sketchbook. This motif figures heavily and is emphasized by the large torn-paper backdrop that serves as mirror and projection screen throughout. Its surface offers an eye slit of view into both the story’s bucolic overture and the violence of its central acts.

In one of the play’s most disheartening scenes, Major Nicholls prepares Joey for their French deployment by desensitizing him to gunfire. With each shot, Joey learns to overcome his fear until the sound no longer fazes him. Such training proves useless, however, when Nicholls dies in action the moment he hits the field, fatally dominated as he and his comrades are by the Germans’ advanced tanks and guns. 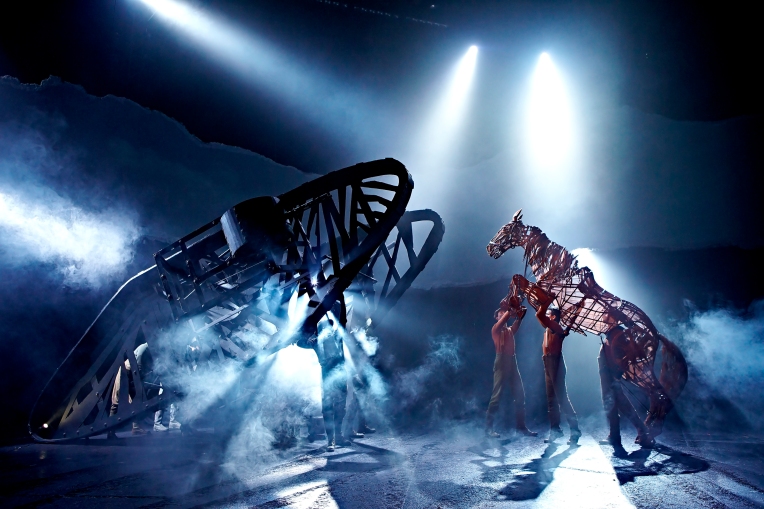 His sketchbook is subsequently sent to Albert, who tears out a picture of Joey and runs away from the farm, determined to find his beloved horse. He lies his way into the army (Albert is not yet 18) and suffers many hardships along the way. After being blinded by tear gas, and reaching the limits of hope, Albert babbles deliriously about Joey just as the equally haggard horse is being led into camp to be put down. Albert whistles for Joey as he always did, and the circle of his journey is closed. Boy and horse make it home safe and sound, painted by the fire of the war’s setting sun.

Story-wise, War Horse is all it’s purported to be—poignant, touching, and triumphantly bittersweet—and manages to refresh its timeworn search-and-rescue theme with panache. By the same token, the Joey puppet renders acceptable certain levels of violence and human-animal segregation in the context of the theater that might not fly so smoothly in the turbulence of the real world. On the surface, such allowance shares much with any politically minded art that seeks to crack the façade of the military industrial complex, if only because it explicitly visualizes the depth of violence it vows to address and, ideally, dismantle. Deeper goings on, however, are at work when Ted whips Joey in a rage over the horse’s initial disobedience. The simple fact that Joey is an assembly not of flesh but of cane and gauze means actors can hit him as hard as they like. This adds realism, yes, but along with its resounding thwack a few questions hover in air.

First: What is the effect of witnessing this violence? Everyone attending the play of course knows that the beating of Joey is a representation, the result of two “dead” objects making sharp contact. The effect is nothing short of cinematic—only where one might normally find a computer-generated victim, here the stand-in is undeniably present. And so, while the violence inflicts no physical pain, it is violence nonetheless, visceral and unrestrained. The master’s tools do not the master’s house unmake.

Second: If the beating of a horse in effigy is deemed worthy of paid admission, what does this say about the fascination with our domination over animals? For indeed, the expressive potential of Joey as character is directly proportional to the level of detail and attention put in by his dedicated puppeteers. Take, for instance, an early scene in which Joey grows from a disjointed, whinnying thing to a full-grown specimen. The intricate choreography required of this transformation speaks more to the power of human invention than to that of animal intelligence or life drive. 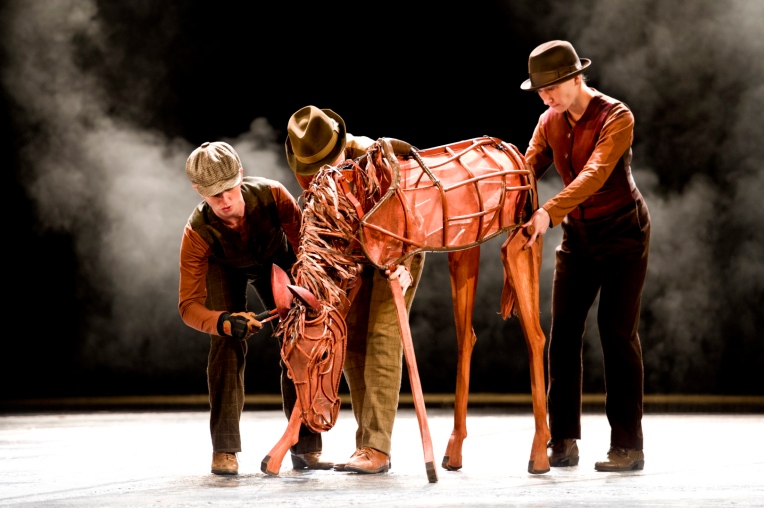 Third: Does not the fact that we can feel sympathy for the beaten horse without witnessing the beating of an “actual” horse mean that we are more comfortable promoting a displacement of said beating over the real thing? If we are willing to shell out exorbitant amounts of money just to soak up such imagery in person, imagine what else we might be willing to do to ensure that it never take real form. Of course, the very nature of a play is to suspend our disbelief for the duration of its alternate reality. In the end, we do not accept the violent act as such, but dismiss it as a dramaturgical necessity, a remainder, a glimpse of narrative afterlife. But for whatever it’s worth, I imagine it takes some time to work through and let go of this little trauma.

On the one hand, the War Horse ethos manifests beautifully on the stage. On the other hand, the play ignores the very equine soul that dominates its spotlight. The opening scene again clues us in on the anthropocentric spectacle about to ensue, as from Major Nicholls’s sketching springs forth a blush of fauna. Stick-mounted birds wielded by actors flutter and circle—every nonhuman being an object of craft—and Joey, at this point but a tender, as-yet-unnamed figure, emerges from a tangle of intuitive squiggles. He is at once center and periphery, the rock-hard soul and its mineral dilution. His accelerated growth stands starkly among characters whose lives are destined for premature ends, along the way activating a subtle eugenic undercurrent, as activated by constant debates surrounding Joey’s breeding and, by extension, value: draught vs. thoroughbred, hunting vs. farming, peaceful vs. warring, and so on.

These contradictions are embodied by the title alone: War connotes violence, and Horse the freedom of nature in the raw. One is a fatal self-projection, the other a powerful assemblage of muscles, tendons, and sentience tamable only by surrender. In staging the two simultaneously, there is something of one in the other. In the horse is embedded a history of systematic domestication, one that feeds the very complexes of human superiority that allow his deployment as an instrument of war in the first place. By the same token, the battlefield is rife with exploitations of materials drawn from the land and returned to it plugged into young, decaying bodies.

Fascination with the puppeted Joey is unsettling, for it lies, I argue, not in the majesty of horses but in an inscription of human dominance over them; not in its closeness to nature but in its uncanny mimicking of it. Logistics and questions of animal cruelty bar the possibility of staging War Horse with a live Joey. The downside to this is the possibility of getting lost in a sea of simulacra at the expense of unframed phenomenological experience. By asserting our control over, and defining of, animality, the play reifies the human-animal divide. In less uncertain terms: The closer we get to re-creating nature, the more disconnected from it we become.

As shown in a behind-the-scenes segment shown during intermission of the London telecast, a production note scribbled by Handspring puppeteers reads: The puppet’s work is to live. Those fortunate enough to witness their sheer artistry in real time can hardly deny this mantra (in fact, the first action Joey’s puppeteers learn is making him breathe). Yet, as the play progresses from Joey’s foal-hood to his weaponization on the battlefield, it’s clear that he was always dead to the world, made “living” only the careful art of illusion. In order for the puppet to live, something in us must die. What we’re left with, then, is a funeral pyre on which has been laid our allegiances to nature at large, set to burn by the torch of unanimous critical praise.