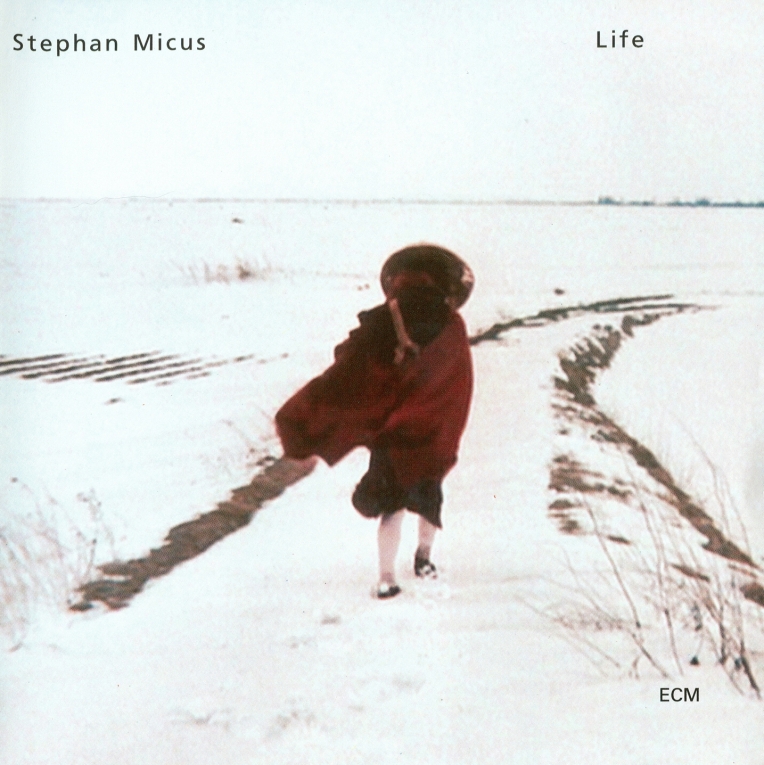 Life takes its inspiration from a Zen Buddhist kōan. The function of a kōan, or riddle, is to test one’s resolve in the face of doubt, the latter born from overdependence on worldly logic (think “What is the sound of one hand clapping?). The goal is not to “solve” but to become the riddle. In this particular kōan, a monk and his master discuss the meaning of life, and through his usual array of diverse instruments and singing (here entirely in Japanese), Micus does just that. He becomes what he performs. Distinct to the riddle of life is its elliptical reasoning: it begins and ends with the same answer. Micus chooses to express this distillation by moving from complex to barest arrangement.

Micus listeners will know many of the instruments through which he speaks: Bavarian zithers, shō (Japanese mouth organ), Thai singing bowls, nay, Tibetan chimes and cymbals, and the sarangi-like dilruba. For Life he adds to his palette the maung (Burmese gongs) and the bagana, an Ethiopian lyre that produces a uniquely entrancing buzz by way of leather strips threaded between its strings.

Narration One And The Master’s Question
A monk, looking for the essence of life, left his monastery at a young age to travel through China. After many years, on his return to the monastery, his old master asked him, “What is this life?”

The bagana extends the album’s thickest spokes, and through its subterranean chirring sets the wheel slowly spinning. Mouth organs cross canvas like floating-world clouds, allowing just enough of the scene to take shape before our eyes, that our ears might take in the Micus voice, magnified ten times over. Despite the wheel metaphor, in this cycle there is no center, only a diffuse matrix of breath and contact. An Irish tin whistle unspools its birdlike call by means of a language that is as ephemeral as its understanding of eternity. The voices grow, turning into feet whose steps—indicated by Bavarian zithers—seek a horizon of intimate hope.

Like its namesake, this instrumental interlude for (for 5 Thai singing bowls, 2 dilruba, and 2 nay) expresses serenity through perception of barest movement, the force of which is at once cause and effect of a lone figure’s presence. The nays and arco draws turn like lily pads on water, held by unseen tethers as the atmosphere holds a cloud.

The Monk’s Answer
“When there are no clouds over the mountain the moonlight penetrates the ripples of the lake.”

Here the drone of six dilruba interacts with the voice, authorial but not proselytizing, transcendent but self-aware. The monk’s words bid the listener to look within in order to be without.

The master’s neurological impulses, each a pylon of the mind standing guard over itself, are vocally expanded. Their collective power sweeps a giant yet gentle hand across land and ocean water.

The Master’s Anger
“You are getting old, your hair is gray, you have just a few teeth left and still you have no understanding of life.”

The catharsis of this moment, a cut in the skin of contentment, marks the voice’s tail with jangling footsteps. Through crash of cymbal and beat of drum, internal conflicts are made external and crushed by soles of passing strangers.

Narration Four
The monk lowered his eyes, tears streaming over his face. Finally he asked his master…

The voices, now numbering 17, reach their grandest magnification. These are the album’s droning lungs, etched into being by the bagana, now bowed, in cavernous antiphony. All of which leads us back to:

The Monk’s Question
“What is this life?”

Accompanying himself on Balinese and Burmese gongs, Micus sings more tenderly and with greater resonance, wavering as if a reflection on moonlit pond.

Evoked through the solo shō and drawn in wisps vapor, the sky unfolds but also tucks into its deepest indigo.

The Master’s Answer
“When there are no clouds over the mountain the moonlight penetrates the ripples of the lake.”

Hence, the solo voice which ends things by beginning them. Taking comfort in the emptiness of response, the words melt into pure sound, taking with them all the care that would hold us back.