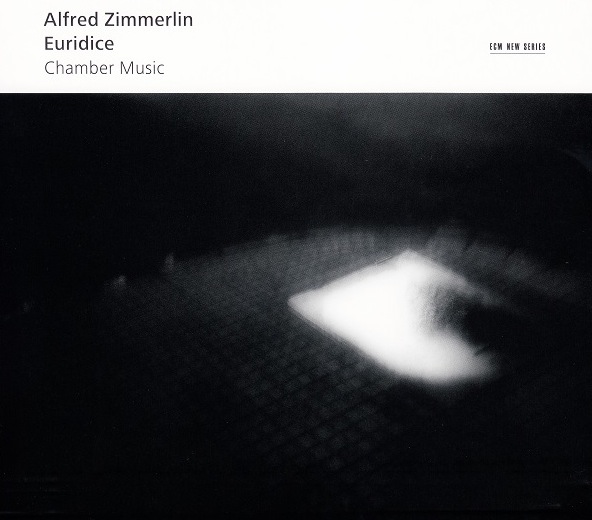 One day, when this terrifying vision’s vanished,
let me sing ecstatic praise to angels saying yes!
Let my heart’s clear-struck keys ring and not one
fail because of a doubting, slack, or breaking string.
–Rainer Maria Rilke*

Continuing its mission to make internationally known the work of underrepresented composers, ECM documents on Euridice three chamber pieces by Swiss composer Alfred Zimmerlin. Born in 1955 and currently a professor of free improvisation at the University of Music in Basel, he is the recipient of numerous awards and a longtime member of the Werkstatt für improvisierte Musik (Workshop for Improvised Music), where his reputation as cellist precedes his reputation as composer. Thankfully, we have this pristine, artfully performed album to even the latter scale.

The program is bookended by two string quartets. The first is Zimmerlin’s second; the last is his first. The Second String Quartet, composed in 2003, comes into being by smooth, if ephemeral, brushwork and balances its draw with distinct pointillism. There is a strange push behind the music, a feeling of perpetual motion underlying the very barest outer ripples of a chaotic epicenter: a tsunami in a cupped hand’s worth of droplets. For this relationship, Zimmerlin looks to the “hermetic language” (hermetischen Sprache) of Rainer Maria Rilke’s “Duino Elegies.” Rilke, of course, was known to lament the limitations of orthography, and here Zimmerlin enables a sonic confrontation with those very limitations. As the composer notes, Rilke, too, breaks free from this constriction in the Ninth Elegy, which ends:

Look, I’m alive. On what? Neither childhood nor
the future grows less…More being than I’ll ever
need springs up in my heart.

Such effusion advances the strings along their own semantic path through space and time, finding eternity in a grain of sand. Each instrument is thus born of its own grammar: first violin as verb, second as declension, viola as punctuation, and cello as arbiter of marginalia. One feels the indefinite shape of their text as solidly as a printed page.

The First String Quartet, completed in 2002, at first feels imported from an opposite pole. Like a Terry Riley ritual spiked with a George Crumb infusion, it projects both shaman and possessing spirit. From a “dense state” (einem dichten Aggregatszustand), the quartet unfolds in an inherently even keel. The musicians hiss and muscle their way through this music, which somehow retains an edge of accessibility. It is enticing in its chaos, ordered not only by score but also by interpretation. There is an almost symphonic quality to the slower passages, fragmentary though they may be, suffused with local colorations and vocal paroxysms before settling in a flowerbed of pizzicati. That this quartet pays homage to the 18th-century Swiss folk song “Guggisberglied” and to Heinrich Ignaz Franz Biber’s Mystery Sonatas is of ultimately little consequence. Zimmerlin designates these not as thematic touchstones, but rather as echoes of a cultural memory, of which the string quartet is but one banal expression—one reason, perhaps, why he avoided the format for so long.

At the heart of the album is Euridice singt (2001-2003/04), a self-styled “scene” for soprano, oboe, cello, piano, and soundtrack (i.e., a prerecorded CD of electronics and vocals). Where the Second String Quartet sought inspiration in Rilke, Euridice is foremost a meditation on the opening of Ingeborg Bachmann’s poem, “Darkness Spoken”: Like Orpheus I play / death on the strings of life.** From this arises a refashioned Orphic myth, one in which Orpheus himself is bolstered by the generative power of his grief, brought on by his doomed Euridice. The latter’s death by snakebite (represented here by electronics) is where the piece begins in a text by avant-garde Swiss writer Raphael Urweider. The oboe (played by Matthias Arter) is Orpheus’s grief made manifest, while Euridice’s spirit lingers in the form of soprano Sylvia Nopper, who gifts her beloved a choir upon his return to the Overworld. Meanwhile, Euridice takes a certain reflective solace in her death. At first, she is ghostlike, nearly overtaken by the oboe: reeds above larynx. Euridice’s initial stirrings sound closer to Japanese Noh theatre than to song cycle as Orpheus’s rapping entourage emerges hauntingly. This is not, however, an infusion of contrasts, but a simultaneous reckoning of elements, so that none holds dominance. Although the oboe is a point of particular fascination in this milieu, it navigates the waters of a turgid anger on both sides of the crust, so that by the end it is spent, slave to its own fatigue. There is one passage, for instance, during which the oboe jackknives between clean and multi-phonic notes over an array of white noise, piano, and pizzicati. Even then, it walks the line between confusion and transcendence, of dreams and reality, in kind. Hence the droning conclusion, which culminates in an electronic fade to dark: the cycle will repeat until all colors become one.

There is an unforced feeling to Zimmerlin. He lets the sounds unfold of their own seeming accord and marks their passage as a jazz musician might transcribe a solo after the fact. In this respect, his experience as an improviser pays marked dividends. This leaves us with a compass that is at once full of direction and directionless, a relic from a past we may never recover, except through the affective, if ultimately illusory, experience of making music.

* All Rilke translations by A. Poulin, Jr.
** The translation of Bachmann is by Peter Filkins.