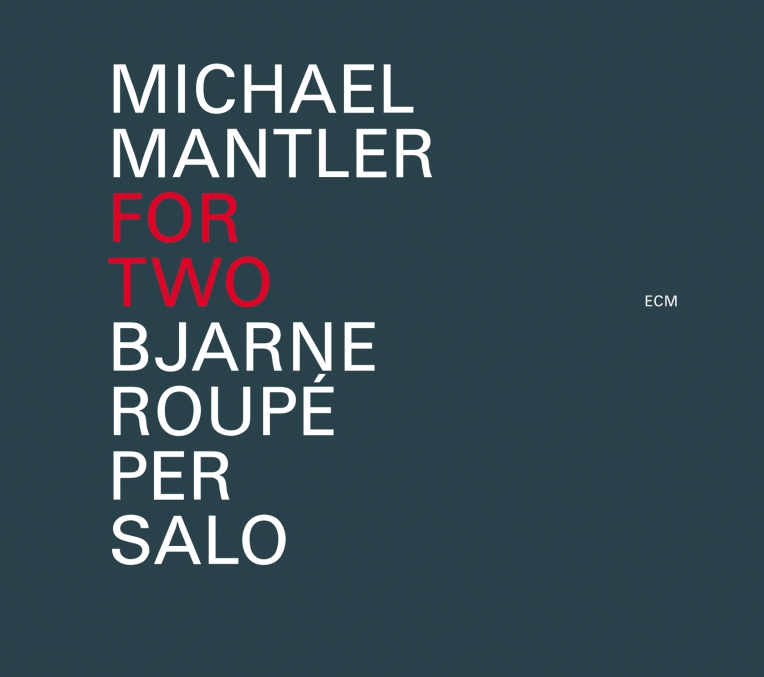 Following the monumental Review and CONCERTOS, Vienna-born composer Michael Mantler intersects once again with ECM in an especially intimate project. For Two documents 18 duets written for jazz guitarist Bjarne Roupé and classical pianist Per Salo in a chemical reaction of, respectively, free improvisation and through-composed material. The resulting compound lures a microscope over the crucible of a uniquely cellular approach, which by these vignettes boil down Mantler’s equal footing in multiple registers.

Most impressive is the musicians’ rhetorical clarity, which despite a separation in training elicits an enchanting cross-fertilization. You might hear the jagged Duet One and think you have the album’s ensuing architecture pegged. But then Duet Two counters with a denser fusion of chord voicing and pointillism, while Duet Six reaches an almost bluesy union of form and content. Roupé’s fingers on the electric guitar are just as exploratory as Salo’s on the keyboard, so that rare passages of unison, as those in Duets Seven and Fifteen, feel more like departures than returns. Roupé’s hard-won crooning over Salo’s insistent finger pedaling in Duet Eight digs deepest into the fertile soil of Mantler’s umwelt, where perceptions of meter and matter switch places.

The beautiful Duet Ten discloses the responsiveness of composer and interpreters alike. Its brevity only serves to enhance the restless core of it all, that creative spark in which resides the potential to flare. Some may burn more brightly than others, but not one emits a hue it was never meant to emit. The notion of integration behind these pieces, then, is something born of their circumstances. In this case, the studio is not a meeting place but a funnel of ideas, from the end of which emerges unpredictable mixtures. Elements of stealth lurk in the shadows of Duets Fourteen and Sixteen, but always with an exit strategy in hand. Theirs is not a code to be broken. It is a break to be coded, a fracture in the window of time that mends itself in Duet Eighteen by molten notecraft.

Thus, the duet functions as a single organism that divides through the fortune of iteration.