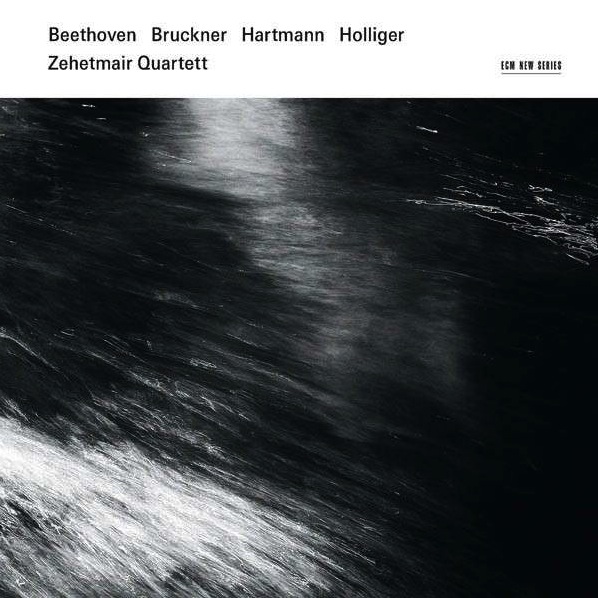 Violinist Thomas Zehetmair has become a household name at ECM, and nowhere more passionately than in his world-renowned quartet. While the group has always been adventurous, this album takes that spirit to new heights, and lengths, as it presents a monumental two-disc program of quartets by Ludwig van Beethoven, Anton Bruckner, Karl Amadeus Hartmann, and Heinz Holliger. 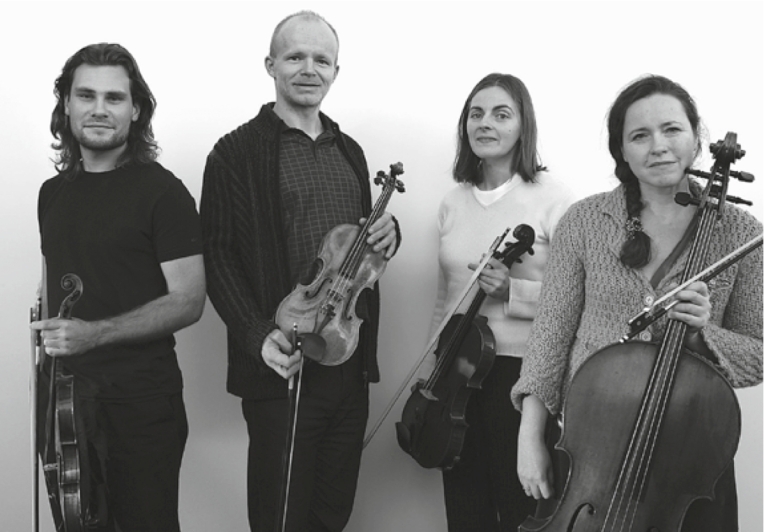 In his brilliant liner notes, Wolfgang Sandner discusses the senescent Beethoven, whose final work, the formidable Opus 135, is the subject of the Zehetmairs’ bar- and hair-raising performance: “Beethoven’s late string quartets share the fate of many works created by great artists in their declining years, works which, as Adorno put it, point to the borderlines of art and almost acquire documentary stature. That is why, he continues, discussions of late Beethoven rarely lack references to his life and destiny.” In other words, the stature of an artist tends to be proportional to one’s biographical investment in that artist, as if the two were bonded matter. But if we were to see this quartet as a rope, we would find that, throughout each movement and between them, the unraveling yields thinner and thinner fibers, each more potent than the last. What distinguishes it as the final work of a master composer is therefore not so much the foreboding admixture of death and reflection that may or may not be intentioned in the music as an underlying spiritedness, held in check until choicest moments of reveal. All of this gives delicate passage into the second movement, which begins in that carefully controlled fragility by which Beethoven was so enamored but sows its field of tension with mounting density. The third movement, marked Assai lento, is cosmic and emotionally naked, a filamented chain into the final movement. Where rhythmic interplay was delightful before, here it surges.

From the end of one’s compositional life to the beginning of it, Bruckner’s String Quartet in c minor, WAB 111, was written in 1862 as a study piece while under the tutelage of German cellist-conductor Otto Kitzler. A smooth mélange of styles, it harbors echoes of Beethoven, and perhaps more explicitly of Dvorák, especially in the opening and closing movements. It is a sumptuous offering, its relief more extroverted in comparison to Beethoven’s inlaid approach, but in the flowing Andante we hear the latter’s game of hide and seek with exuberance before climbing ashore fully intact in the Scherzo, which serves as an amiable and spirited portal into the darker conclusion.

Hartmann’s String Quartet No. 2 is duly special for appearing on this record. First, it was recorded in 2002, eight years before the rest of the program, with a different second violinist (Matthias Metzger) and cellist Françoise Groben (1965-2011), a founding member of the quartet and in whose memory this recording, her last, bears dedication. Second, the music itself represents one of the pinnacles of the 20th-century string quartet. Begun at the tail end of World War II and finished in its immediate wake, it takes a three-movement structure, building on lachrymose foundations a tower of dance. Far from linear, however, it continues the theme of animated expositions out of quiet introductions. By these the music adopts an illusion of self-recognition. Despite its many shadows, the passion and joy with which the quartet plays this piece is fully evident. Groben’s playing is a wonder, bringing out as it does a turgid core. That said, the players do, and must, work together as one unit, for each move pulls the others in empathic response. A pervading heaviness in the central Andantino makes it an especially demanding play, as the performers must engage in deep listening and strictest attention to dynamics. The last movement, a Presto, enables reckoning of those darker predecessors with the light of geometric (if not also geographic) thinking and lends sanctity to the final major chord. Phenomenal.

Last is Holliger’s own String Quartet No. 2. Written by commission from the musicians, this stream-of-consciousness, single-movement work includes aleatory elements and is played scordatura. Like a scientist who pours water from one glass to another yet still finds wonder in the changes, Holliger engages the strings in flowing conversations of elements and transparencies, marking every drop spilled with precision. In this way, he cleverly reverses inner and outer. Like the Hartmann, this piece requires religious attention to dynamic contrast. This is not to say that Holliger is a cryptic composer, but that he composes with solutions rather than questions. One needs not overextend any theoretical impulse to understand the motives of writing that so comfortably favors absorption. This means that the piece’s quieter midsection may seem the very definition of mystery, when in fact it uses the mode of whisper to focus attention on its thread count. Consequently, the more forthright politics of its surroundings glisten with a personal sheen, which finds itself honed by erosion and the shape of human voices, as the musicians are bid to sing in the final scene. With the joining of their throats, these classical constructions of gut and wood become bodies in and of themselves, and render the preceding quartets a limb apiece.