Into the forest again
whence all roads depend
this way and that
to lead him back.
–Robert Creeley

Aaron Parks’s solo ECM debut might just as well be called “Arbor Essence.” Not only because each of its 11 improvised tracks grows however it wants to, but also because as a forest they provide shelter from rain and screen against the sun’s blinding rays. The album belongs unquestionably alongside Craig Taborn’s Avenging Angel and any number of Keith Jarrett records as a significant contribution to the solo piano archive, though it owes as much to Erik Satie, Claude Debussy, and Paul Bley. 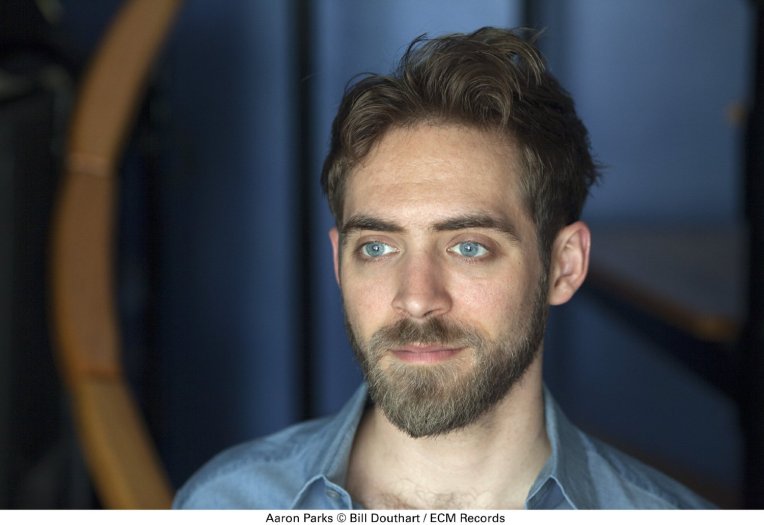 With so much foliage to reckon with, it’s no wonder Parks begins “Asleep In The Forest.” The apparent expanse of his playing is only enhanced by the engineering, which places us with him among the branches, looking down at the comings and goings of fauna below and wearing moonlight like a shroud. “Toward Awakening” confirms this feeling of night in a dreamlike pulse and builds waves with a surrendering intensity not heard since The Köln Concert. Unlike that classic predecessor, this excursion bleeds in more intimate ways, shared not with an audience of flesh but a congregation of souls. An awakening, yes, but into a realization that one always returns to slumber.

Like the album as a whole, “Past Presence” is a study in contrasts, of depth-soundings and highborn prayers. It’s a fantasy novel come to life, and in which kingdoms are built on foundations of magic just as they are undone by the same. In the looming shadow of its castle is where Parks follows more robust threads of melody in “Elsewhere,” an eerily distorted ballad of seeking and forgiveness that touches the horizon like a match to candlewick. So peaceful is its skewed vision of reality that the mechanisms of “In Pursuit” come as something of a surprise. In them is a whiff of philosophy that lingers over interlocking hands, the left’s rising bass lines bolstering the right’s gossamer speech. “Squirrels” and “Branchings” are, respectively, more whimsical and poetic, while “Homestead” favors the grays and browns of an Andrew Wyeth painting, its nautilus resting beneath a billowing curtain and chambered by the will to be heard.

This is one of those quintessential ECM albums that would not have existed without the label’s tireless archive on which to build, for one will catch hints of mainstays Ketil Bjørnstad (“River Ways”) and Arvo Pärt (“A Curious Bloom”) in addition to the ones already mentioned. By expanding minds on either side of the genre fence, it bespeaks the joy of creation for any who will take it—a gift without wrapping but the embrace of a welcoming ear.