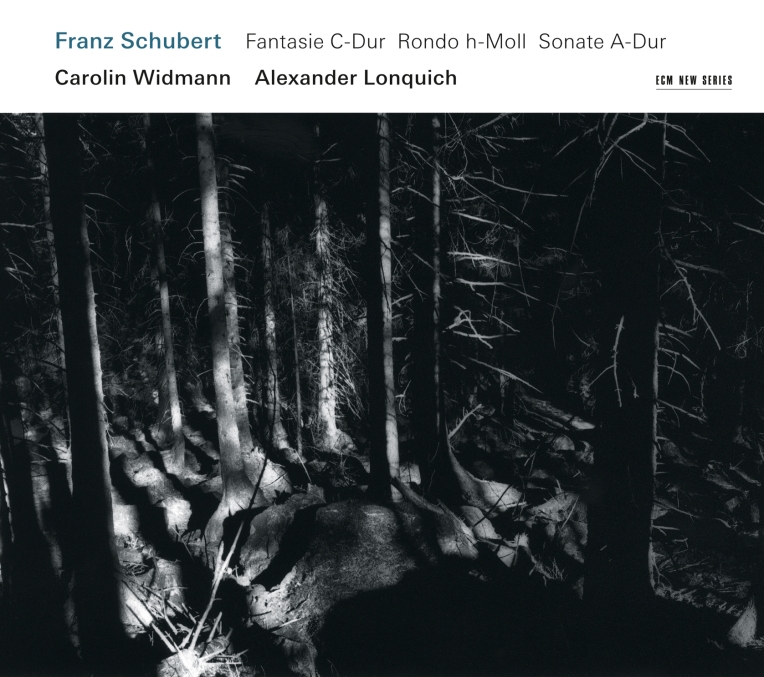 “We cry, knowing in untold happiness, that this music is as it is in the promise of what one day we ourselves will be. This is music we cannot decipher, but it holds up to our blurred, over-brimming eyes the secret of reconciliation at long last.”
–Theodor W. Adorno, “Schubert” (1928),
trans. Jonathan Dunsby and Beate Perrey

If Adorno’s thoughts on Franz Schubert seem as indecipherable as the music they describe, it’s only because I have taken them out of context, arriving as they do at the tail end of a dense essay. Similarly, the C-Major Fantasie of 1827 that begins this all-Schubert program from violinist Carolin Widmann and pianist Alexander Lonquich comes to us excised from the tail end of a dense life. Just shy of 31, Schubert would die 11 months after committing it to paper in bipolar flurry of activity. The piece is widely considered to be the most significant he ever composed for violin, and is distinguished by the technical and emotional demands it places on worthy performers. Even Adorno was ambivalent about the overall success of the Fantasie, rightly praising its protracted Andantino as a melancholy masterstroke while in the same breath criticizing the final Presto as something of a cop-out. If we are to take the implications of this reaction to their fullest, however, then we must also accept that Schubert was less at ease proclaiming endings than he was contemplating their inevitability.

Over a traversal of seven movements, Widmann’s tone control yields thrilling restraint and expectorations by turns, while Lonquich matches her every move with an inward-looking fluidity. Together they crumple rays of light into balls of shadow, tossing them over cliffs of uncertainty until they learn to fly. To the latter end, the Allegretto has never sounded so uplifting than in their hands. With unforced drive and organic handling of tempi, the duo articulates the aforementioned Andantino as if it were a lullaby they’d heard since the cradle. In true Schubertian fashion, they feel intimately connected at a distance, stretching between them a connective emotional reserve. In so doing, they deviate from ECM’s previous recording of this piece (New Series 1699) by way of a less parallel approach that emphasizes the final movement’s reversal of the first.

Schubert’s Opus 70, the b-minor Rondo brilliant of 1826, fills the program’s sweet center with an intriguing diptych. A declamatory Andante sets up a nearly 12-minute Allegro, of which the running melodies and gorgeous key changes reveal a crystalline intellect at play. There is a seemingly inexhaustible energy about this piece, which cracks open each potential ending like an egg and scrambles it back into the shell.

The A-Major Sonata of 1817 closes with the youngest work of the program. Some Beethoven influence is palpable, especially in the leaping Scherzo, but the methodical, nuanced airiness of the opening Allegro is all Schubert, as are the kaleidoscopic Andantino and sly finale. Hearing Widmann and Lonquich navigate its many corridors, one may agree with their characterization of Schubert as the proverbial wanderer, but to these ears their interpretations depict the opposite. It was not Schubert but the landscape in which Adorno situated him that wandered in concentric circles, leaving the composer to pick and choose his songs until the circles closed their mouths far too early.