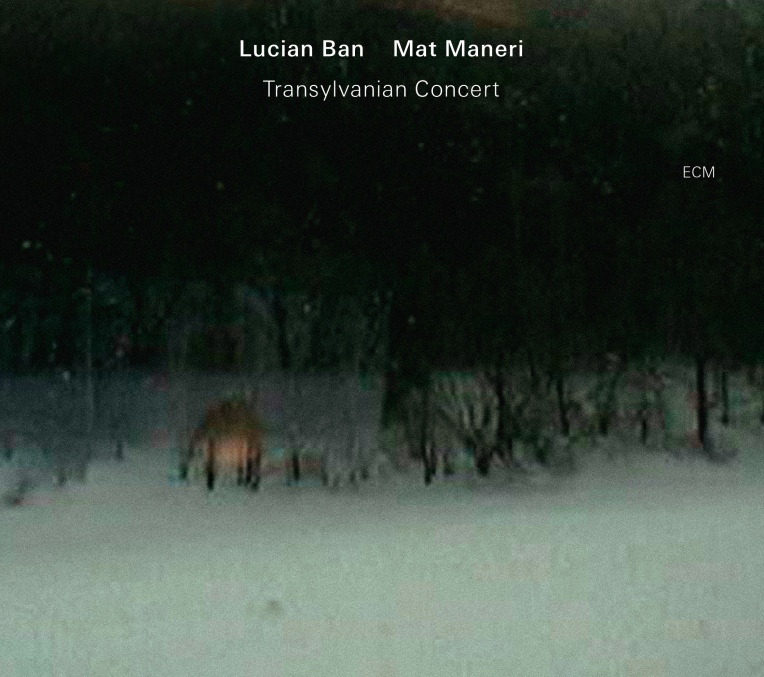 Pianist Lucian Ban, making his ECM debut, joins veteran violist Mat Maneri in an impromptu duo concert. That much is obvious. What transpires between them is less so, elusive almost to the detriment of verbal capture. Much of the program was written by Ban with Maneri in mind after the two had played together in an ensemble context. Yet the way they unpack each tune into a beautiful mess of clothing and accoutrements, you’d think everything was played without preparation. (The freely improvised “Darn,” on the other hand, comes spilling out like a through-composed gnarl of roots and impulses.) Whatever the underlying structure, one thing is for sure: this is a dialogue of such intimate magnitude that it feels like a volcanic eruption in reverse. 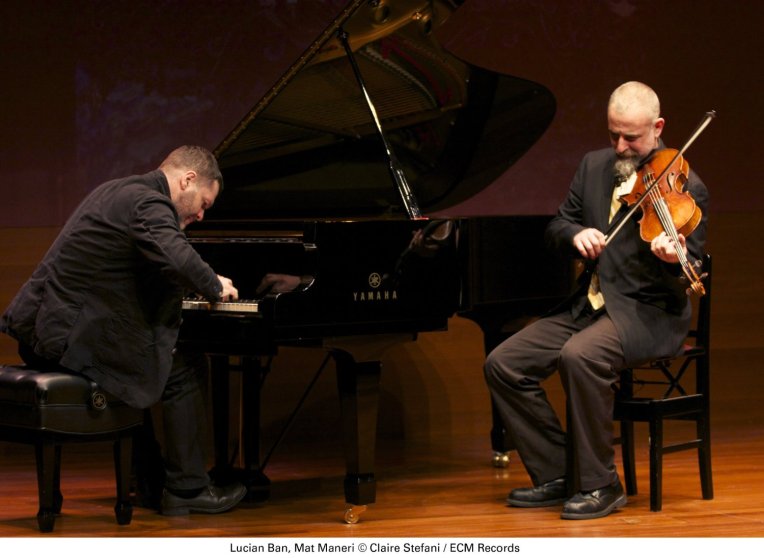 Ban’s thematic titles are reflective of both his Romanian origins and life in New York City. “Not That Kind Of Blues” is smitten with the streets. It opens in a dimly lit room, the pianism resonant yet forthcoming. Maneri’s ergonomic bowing reveals a cartographic exactitude in its tuning, his instrument is no mere machine but a voice. From these nebulous beginnings emerges a stark figure whose urban life has just begun. It wavers, vulnerable, yet is attuned to the surroundings, as if it had known them in the womb. If such abstract analogies tell us anything, it’s that the duo is no longer that. It’s a choir of strings and hammers simmering below the potential to scream.

Rather than tunes, these deserve to be called places. Not only because titles such as “Harlem Bliss” and “Monastery” make reference to them, but also because they develop between vertices of infrastructure. Between Maneri’s lilting lyricism, selective double stops, and the true-to-jazz spirit that pervades every scrape of his bow and Ban’s florid yet never overbearing solos, both performers pick and choose their utterances with liturgical care. They move like ones unfazed by judgment. Even the latter tune’s groovier bodies cannot obscure the variegated heart that sings within. Maneri’s pizzicato puncta secure the canvas for an arcane raga, which by the camera lucida of Ban’s keyboarding is rendered renderable.

Before Ban’s “Two Hymns” in memory of his grandmother, Maria Voda, close the curtain with their protracted nod to earthly things, Maneri’s “Retina” (a reflective piece that contradictorily enough works its meditations behind closed eyes, it seems) and his solo treatment of the spiritual song “Nobody Knows The Trouble I’ve Seen” pay deference to very act of creation by crooning at the feet of it. We might, then, see this as Maneri’s own in memoriam to his late father Joe, whose playful spirit finds entry point into the foreground at such moments of abandon.

The musicians sound as if they are being moved by guidance of an unseen hand, a ghostly presence to make a trio of the act. Such a haunting begs description, but is immune to such. In the end, there’s little to say about the musical event documented on Transylvanian Concert, because it already says so much in a language without equivalent.