Stefano Bollani
Joy In Spite Of Everything

“You just go and you see what happens.” This is how pianist Stefano Bollani describes jazz in its purest form. And because so much happens on Joy In Spite Of Everything, his latest for ECM, you’ll want to return to it time and again to puzzle through its many twists and turns. The band is accordingly something of an ad hoc congregation. The album documents the first time that saxophonist Mark Turner, guitarist Bill Frisell, bassist Jesper Bodilsen, drummer Morten Lund, have ever been in the same room, and with their charismatic leader armed at the helm with nine original tunes, the results are spectacular. 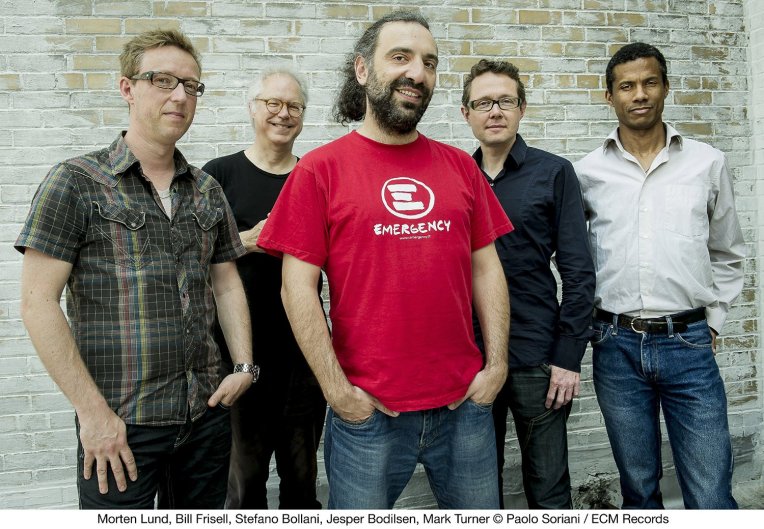 Bollani never ceases to impress with the underlying consistency of execution he brings to even the most disparate music. His ballads glow by virtue of an inner fire, while his up-tempo numbers breeze coolly on by. But the new sound of “Easy Healing” may be something of a surprise. One half-aware listen, and you might swear it was an outtake from Charles Lloyd’s Voice In The Night. The instrumental combination—and within it Frisell’s John Abercrombie-esque picking, Bollani’s kaleidoscopic solo, and Bodilsen’s brief unpacking—in tandem with the closely miked engineering puts you in the center of it all.

Slow dances are hard to come by this round, but find a worthy ambassador in Turner, who graces two of the album’s most reflective sides: “Les Hortensias” and “Vale.” His soulful unpacking of the first, a gorgeous rubato picture brushed as finely as the drums, is by far the album’s highlight, while the second weaves its solos through a gnarled forest. Turner is, of course, just as comfortable on the hot plate, leaving his wheels on the runway of “No Pope No Party” with no intention of ever coming down. And as Lund balances power and sensitivity, Frisell walks a tightrope of his own between melodic defiance and evolution. The guitarist further shares moonlight with Bollani throughout “Ismene,” which would seem to evoke a fairy frolicking along the cusp of a leaf-cupped pool but which might just as well be a love song.

A sprinkling of other tunes rounds out the set. Bollani’s nimble fingers clutch the spotlight of “Alobar E Kudra.” Its angular groove is most representative of the album’s name. “Teddy” is a happy-go-lucky duet for guitar and piano that might seem out of place were it not so brilliantly executed. And the title track is the fleetest of them all, throwing the circle back on Lund, who shuffles the deck at every turn of this trio excursion.

I was delighted to encounter “Tales From The Time Loop,” which names a 2003 book by David Icke. Having read and listened to almost everything ever written by the world’s most controversial author, I couldn’t help but smile to see him referenced on an ECM record. Of the many theories put forth by Icke, his vision of a holographic universe is one of the more intriguing, and finds a musical equivalent in these smooth travels (this album’s title further echoes his message of infinite love). Every cell of the rhythm section’s bustling interactions suggests infinitely more within, setting up a chain of arresting illusions. Bollani’s very presence reminds us of why we arrived in the first place: to go and see what happens.

(To hear samples of Joy In Spite Of Everything, you may watch the EPK above or click here.)