Trio Mediaeval are Anna Maria Friman, Linn Andrea Fuglseth, and, making her ECM debut, Berit Opheim (who in 2014 replaced Torunn Østrem Ossum). In their sixth New Series program, the Scandinavian songstresses bring a characteristically thoughtful cohesion to their selections and the themes under which they live again. The album’s title means “North Wind,” but as recording supervisor John Potter explains in his album note, the metaphor is as much temporal as geographical, emphasizing as it does the Trio’s centuries-long reach. 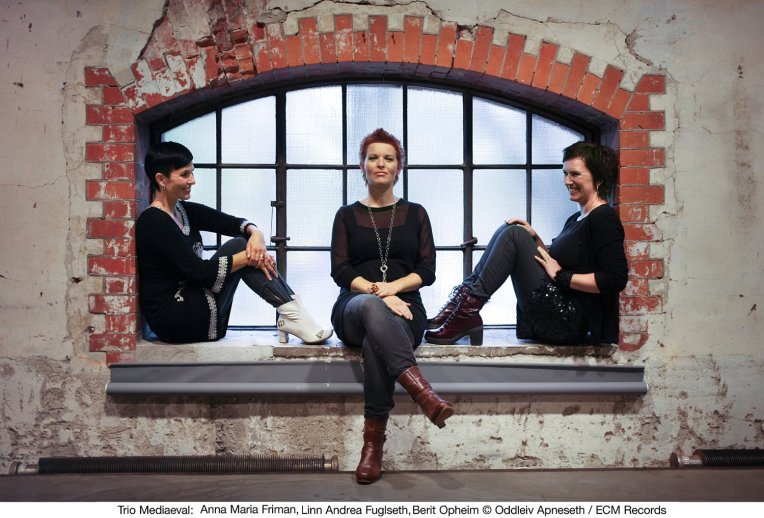 Furthest from the present are two Italian sacred songs from the 12th century. “Benedicti e llaudati” (Sacred and blessed apostles…) and “Fammi cantar l’amor” (Let me sing of the love…) contrast radiant harmonies spun around a core of chant with monophonic lines of flight. The drone also figures as a natural extension of three Norwegian folk songs, which find the singers accompanying themselves for the first time on instruments (the enriching percussion heard on 2007’s Folk Songs was courtesy of Birger Mistereggen). The Hardanger fiddle, played by Friman, is both heart and lungs of “Ingen vinner frem til den evige ro” (Eternal rest is the reward of…), and its ghost whispers in the air of the vocal solo “Gud unde oss her at leve så” (God gave us grace to live), a string of beauty untying itself in righteousness.

A step closer brings us to 14th-century Iceland and the vespers of the Office of St. Thorlak, beautifully unpacked from their plainchant rudiments into braids of censer smoke. The masterful arrangements enchant with their folkish brogue, sounding at times more like songs of the Irish plains than prayerful nights. Now it’s Fuglseth on the portable organ who gleans a droning undercurrent from the score and copies its DNA until it breathes. Yet another step lands us in the more pronounced polyphony of three 15th-century English carols, of which “Ecce quod natura mutat sua jura” (Behold, nature changes her laws) and “Alleluia: A newë work” are sublime highlights. The latter was the first piece the original Trio ever sung and makes its glowing presence known to a wider audience at last.

In the realm of the living, English composer Andrew Smith contributes three symbiotic pieces to the Trio’s repertoire. Of these, “Ioseph fili David” (Joseph, son of David) is the crowning jewel of the program, while “Ave regina caelorum” (Hail, Queen of heaven) breaks glass with its light. Swedish composer Anders Jormin, better known to ECM fans as a jazz bassist with a classical heart, solely offers “Ama.” Based on a poem by Virgil, it is a miniature of overlaid shapes, transparent and turned askew until they form new harmonies in search of the old. The singers themselves compose three pieces, each a vital organ to the program’s functioning body, planets without satellites whose clouds welcome all suns. And American composer William Brooks yields the somber yet tender “Vale, dulcis amice” (Farewell, sweet friend) on which the program ends.

The combination of self-accompaniment and new music secures the women of Trio Mediaeval as the reigning torchbearers of the now-defunct Hilliard Ensemble, of whom they are superlative protégés. Like their legendary mentors, they are able to move from one coil of existence to the next without slightest loss of form. Here’s hoping they continue to do so for decades to come.