The life of Giovani Battista Pergolesi (1710-1736), cut tragically short at age 26 by tuberculosis, nevertheless made an immeasurable impact on the world of Baroque music and, as evidenced here, beyond. Already a successful opera composer by his mid-20s, Pergolesi would leave behind his final work, the Stabat Mater of 1736, on his deathbed. As Il Pergolese, singer Maria Pia De Vito, pianist François Couturier, cellist Anja Lechner, and percussionist Michele Rabbia have responded to the Italian composer by modernizing him at a crossroads of jazz, folk, and improvisation, De Vito going so far as to translate texts from the Stabat Mater into Neapolitan. The latter move yields pieces by Couturier inspired by that same masterpiece. His “Amen,” like the album as a whole, treats the development process as a precious use of time: only after Rabbia’s airbrushed percussion and additional electronics take hold do the darkly rolling piano and forlorn nightingale of cello share a canvas. The affirmation itself fluoresces under De Vito’s care before carrying over into Couturier’s jazzily inflected chords, by which he sets up Pergolesi’s processional “Fac Ut Portem.” De Vito rides the ocean waves of its drama, craving sunlight but drinking only storm. She then dips back into the Marian text with “Dolente.” Resonant percussion and birdlike vocals give Couturier the space to lull us into the song proper for a lachrymose yet, by virtue of the Neapolitan language’s delectable syllabic flavor, somehow blissful repose. 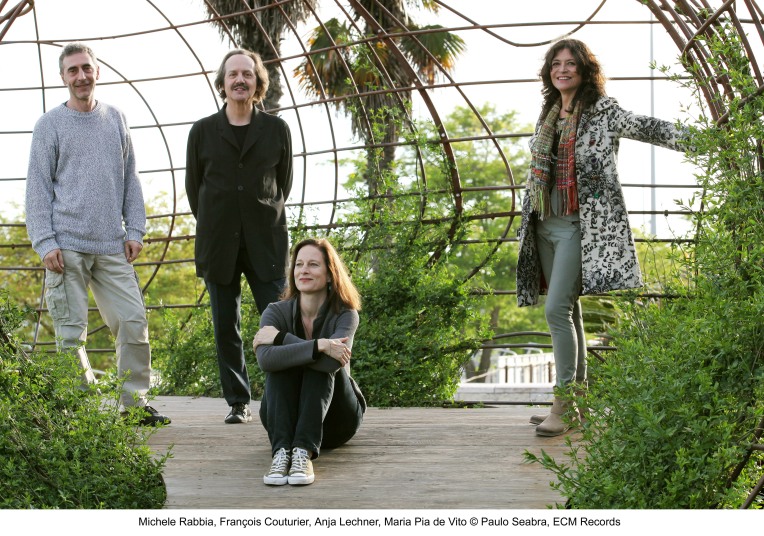 From Pergolesi’s first comic opera Lo frate ’nnamorato (The Brother in Love) come two arias. The achingly lyrical “Ogne pena cchiù spietata” rests on a bed of piano and cello. Into this gorgeous scene steps De Vito like another Maria—Farantouri, that is—but with a little more maple mixed into her oak. Even after she fades, traces linger on as Lechner and Couturier are joined by Rabbia’s tapped hand drums. “Chi disse ca la femmena,” on the other hand, is a more straightforward melody that turns into folkdance and best explores the band’s rhythmic possibilities. A similar carpet of development unrolls itself down the corridor the “Sinfonia for violoncello,” which holds its own in a landscape of shifting tectonics. With archaeological care and glass tools, Rabbia chips away at Lechner’s caged pizzicati as if they were relics in need of recognition. That they most certainly get in the return of Couturier, who with an empathic analysis tells the backstory of their unearthing. And as Lechner’s bow sings its arco song, it resuscitates a Baroque heart to a calm yet glorious rhythm. “Tre giorni son che Nina,” a wildly popular song of the Italian Baroque attributed to Pergolesi, is another thing of beauty. It opens in raindrops before Lechner puts bow to string and follows a river breached from a dam of mortality.

Some freely improvised tracks round out the program. “Fremente” winds itself around De Vito, whose bubbling lines run wild in the realm of possibility, while “In compagnia d’amore I” and its sequel evoke Luciano Berio’s Visage and a voiceless chasm, respectively. Whatever their guise, the musicians of Il Pergolese pose their emotional statuary in accordance with the moment at hand, turning everything they touch into intimate theater, with De Vito as the heart, and the trio as the soul.

(To hear samples of Il Pergolese, you may watch the EPK above or click here.)