Trumpeter Paolo Fresu hails from the island of Sardinia, bandoneonist Daniele di Bonaventura from the coastal town of Fermo on the Italian mainland. Water and land may separate their origins, but together they make music so unified that a single landscape is enough to define them in this context. Their first ECM appearance on Mistico Mediterraneo placed their collaboration at the center of a project fusing improvisation with Corsican chant. With nothing but air between them here, they create a chant all their own, a language that breathes in and sings out.

“Da Capo Cadenza” is the first of three tunes by di Bonaventura. Fresu’s lucid colorations cross every tee of the composer’s bellowed writing. The feeling of cinema is so strong here, it’s no wonder that the recording session should be the subject of Italian filmmaker Fabrizio Ferraro’s documentary Wenn aus dem Himmel, which turns the creation of this music into a meditation on spatial crossings. 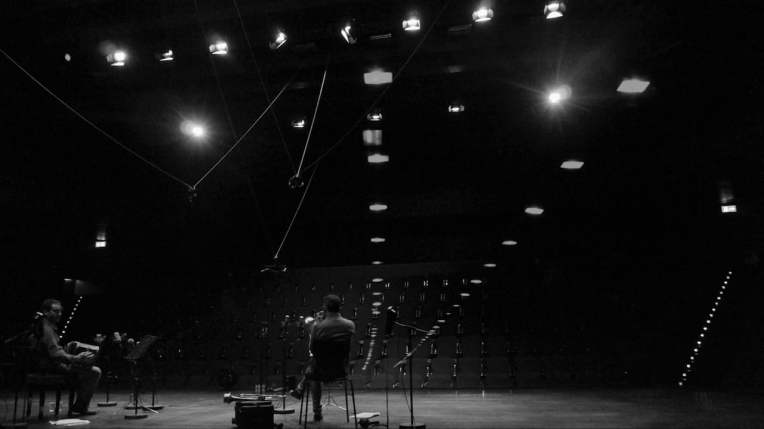 This set opener is also a fine example of flugelhorn virtuosity, not in terms of technical flourish (a given) but of emotional integrity. His way with a horn lends itself to poetry, but versifies with a style that shades any description of it. To experience its atmospheric range, listeners need only immerse themselves in the duo’s take on Brazilian composer Chico Buarque’s “O que será,” last heard on an ECM album of the same name by Stefano Bollani and Hamilton de Holanda. The version here follows a progression that characterizes many on this album, building from caution to confidence as it gathers momentum into the Chilean resistance song ”El pueblo unido jamàs serà vencido” of Sergio Ortega. Despite, if not because of, the delicacy with which Fresu and di Bonaventura breeze through these changes, a raw, underlying power begins to emerge.

Fresu deepens the flugelhorn in three tunes from his own pen, including “Calmo” and the title track, both lyrical highlights. The latter tune closes out a disc that, despite its general quietude, stays on in the memory as a blast of renewable energy. As Fresu’s final note trails into non-existence, it carries into tomorrow the certainty of another sunrise. Other highlights from this darker instrument can be found in the freely improvised “Sketches” and delightful, if somber, take on “Quando me’n vò” from Puccini’s La Bohème. It is music that has lived many lives before, and lives again, as it will ever onward.

Close to center is di Bonaventura’s “Kyrie Eleison,” a wordless solo moves with the quiet strength of a hymn. Beyond it are tracks that employ muted trumpet, which at Fresu’s fingertips invokes early Miles Davis, even as it oozes a distinct charisma. Along with his own “Ton Kozh” and di Bonaventura’s “La mia terra,” Uruguayan singer-songwriter Jaime Roos’s “Se va la murga” stands as an album touch-point. The latter is lovingly arranged and awakens percussive details from within the instruments. By it is revealed an inner pulse that binds their art within the acoustics of the Lugano recording studio in which they find themselves transfixed for this enchanting hour. Di Bonaventura carries enough weight in his bellows to support the grandest sweeps from Fresu and, by the same token, enough airiness to guide his lightest feathers, unbroken, to shore.

More playful elaborations make the four minutes of Neapolitan composer Ernesto de Curtis’s “Non ti scordar di me” (Do not forget me) pass by with the wistfulness of youth itself, thereby enhancing the nostalgic hope of the title. But nowhere does the muted trumpet speak so forthrightly as in “Te recuerdo Amanda.” This aching melody by Chilean songwriter Victor Jara flows through brass like time itself, bypassing layers of history to let its voice be known. And, really, that’s the essence of this music. It is so personal that it becomes relatable on a purely human scale, shed of politics and origins until only the musicians and audiences remain, bound by mutual recognition that life is infinitely more important than its hindrances.

(To hear samples of In maggiore, please click here.)