Luys i Luso realizes the dream of Tigran Hamasyan to build an entire album around the sacred music of Armenia. Now based in Los Angeles, the prodigious jazz pianist has held on to the melodies of his homeland with solemnity and patience for this project. The antiquity of much of the repertoire—hymns, sharakans (chants), and cantos, some of which date back to the fifth century—leaves room for improvisation, which evidence suggests has been a part of its living tradition for centuries. Hamasyan takes to this freedom like a wing to wind, using his polyphonic arrangements of monophonic melodies as runways for spontaneous flights. He has intentionally left the piano parts unwritten, so that by following only skeletal structures he is free to move about the score. 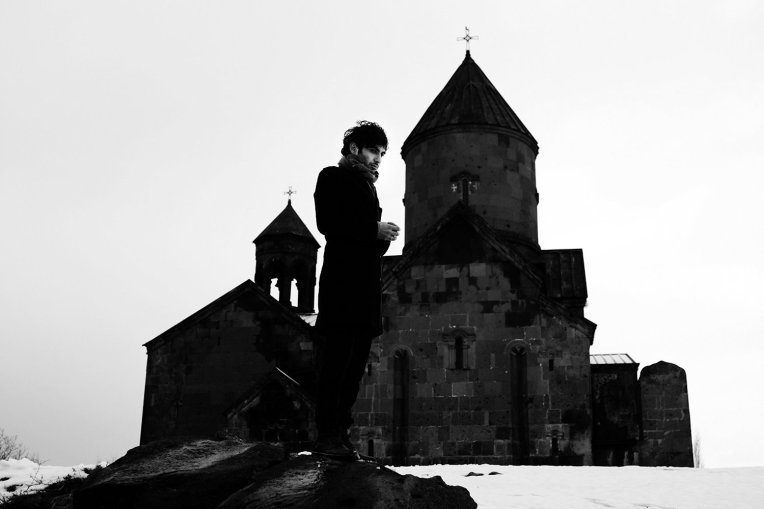 The album’s title (Light from Light) is primarily descriptive, revealing the process of pulling out an interpretive glow from contemporary compositions, and from the older ones embers of bygone devotions. It also signals themes of variation in a program built around multiple incarnations of the core melodies. The preludinal “Ov Zarmanali” (Oh this Amazing and Great Mystery) by 12th-century catholicos and composer Grigor G. Pahlavuni, for example, illuminates the listener’s ears first through a solo piano treatment, like snow falling from the branches of a godly tree, and later in the album in a veritable river of voices. The Yerevan State Chamber Choir’s balance of raw technique and rhythmic precision indicates a vulnerability diminished by numbers. Hamasyan’s pianism takes on a regular role here, sounding its arpeggios with veracity. The modal changes speak to something deeper than beauty, to the heart within it darkened by neglect. Midway through the singers fade and leave the piano to move jazzily through their afterimages, only to return like objects of worship polished smooth over centuries of devotion. “Sirt im Sasani” (My Heart is Trembling!), a canticle by 13th-century canonical writer Mkhitar Ayrivanetsi (c. 1230-1297) also reveals its mercies through two iterations, the second of which is a piano variation of Trinitarian dimension, while the first professes faith through the distant mechanisms of exile. Bass soloist Seiran Avagyan renders a flower of textual identity shedding petals in favor of bodiless light.

No such project would be complete without Komitas (1869-1935), because of whose efforts much of Armenia’s sacred music has been preserved. His “Hayrapetakan Maghterg” (Patriarchal Ode), a hymnal request to be heard and absolved, takes three forms. In two Hamasyan-only versions, the pianist attends to the words between notes. He is keenly aware of these spaces and gathers strength through their collective presence. Like the pages of a thumb-worn Bible, its gilding has faded through absorption, finding in its choral life a treasure of grace and, in soprano soloist Jenni Nazaryan, a dove clutching sprigs of gratitude. From Komitas’s Armenian Holy Mass we encounter two sections, “Surb Astvats” (Holy God) and “Orhnyal e Astvats” (Blessed is God), each based on melodies from the seventh century. Where the former is driven by forward-thinking improvisation, the latter looks backward by sampling tenor Armenak Shahmuradyan. This 1912 archival recording, made in Paris in the presence of Komitas, defines the palette from which the choir draws its colors over a century later.

Medieval theologian and hymnologist Mesrop Mashtots (c. 362-440) is represented in two chants and a canticle for Fasting Days. The first of these, “Ankanim araji Qo” (I Kneel Before You), is where the choir makes its album entrance—or should I say “in-trance,” for such is its state of being. Therein, singers descend to the bottoms of their linguistic wells, making dervish circles until the shadows are cleansed. Each is a powerful statement of redemption, of the will to drown in transgression so that one might be reborn into sobriety.

For the singly rendered, Hamasyan offers two cantos of the Resurrection, both chanted during Divine Liturgy. “Nor Tsaghik” (New Flower) by Nerses Shnorhali (c. 1102-1173) strikes difference through its use of prepared piano, at which Hamasyan uncovers hidden voices behind the voices, while “Havoun Havoun” (The Bird, the Bird was Awake) by Grigor Narekatsi (c. 951-1003) pairs soprano and piano in the name of faith. Nazaryan’s lone singing barely grazes the belly of the nearest cloud until the nourishment of Heaven comes raining forth, leaving us to drink in what we can.

Those who would write off this recording on the sole basis of its description—Do we really, they might say, need another jazz musician improvising over a vocal ensemble?—may be pleasantly surprised at the level of integration achieved on Luys i Luso. Like Misha Alperin, Hamasyan recognizes the dedication of knowledge required to mesh with equally disciplined singers. Whether broken or healed, each of his selections embodies the fragmentary nature of things as a path to wholeness. The sheer love pouring from that wholeness is proof of concept.

An unexpected masterpiece, and one of ECM’s most astonishing in years.

(To hear samples of Luys i Luso, please click here. Further information about the project is available here.)