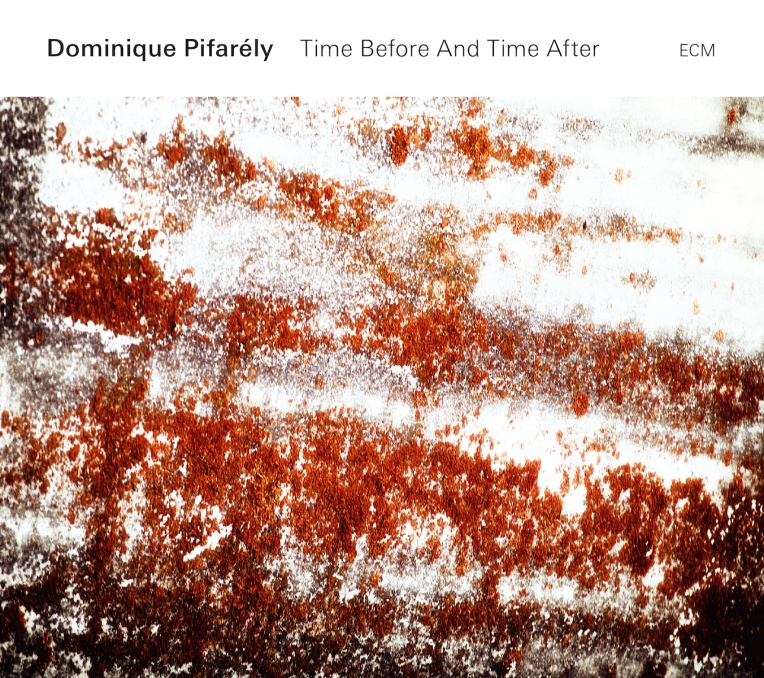 Dominique Pifarély
Time Before And Time After

Here is a place of disaffection
Time before and time after
In a dim light: neither daylight
Investing form with lucid stillness
Turning shadow into transient beauty…
–T. S. Eliot, “Burnt Norton”

After leading a string of caravans across the sands of ECM, Dominique Pifarély enchants on this set of solo recordings taken from French concerts in 2012 and 2013 at Auditorium Saint-Germain (Poitiers) and Cave Dimière (Argenteuil). Although nearly everything is improvised, the violinist dedicated each piece in retrospect to a certain poet, from whose verses he also chose a title. More than highlighting personal connections between literature and music, this artistic decision reveals an agency of spontaneous creation.

The Near Eastern quality of “Sur terre” (for Mahmoud Darwich) makes for a poignant introduction to this border zone where motifs converse for want of being equally heard. Every color and texture is like the seed of a new community, touched by horizons yet to be unfolded, and in this respect shares kindship with “L’air soudain” (for André du Bouchet). The latter’s robust yet plaintive cry yearns to be acknowledged in a place uninhabited except by its own singing. Arid climates are evoked in the rasp of a bow: a gargantuan tongue scraping along the earth in search of nourishment but finding only dust and ruins.

“Meu ser elástico” (for Fernando Pessoa) and “D’une main distraite” (for Henri Michaux) are both jagged wonders, wherein leaping suggestions of dance are constantly pulled back to origins, while the masterful“Gegenlicht” (for Paul Celan) shows us thefull scope of Pifarély’s technical and artistic capabilities. Like a prisoner who succeeds in digging his way through a wall with bare hands, he peels away the barrier to freedom one granule at a time. But before he inhales fresh air again, he must pass through “Violin y otras cuestiones” (for Juan Gelman). A struggle that is as political as it is personal, it finds temperance only in the sul ponticellosalvations of “Avant le regard” (for Jacques Dupin) and “L’oubli” (for Bernard Noël).

If shades of the Baroque are present, they’re no illusion, as even Pifarély admits: “[O]f course Bach is in the air because Bach is polyphonic, and the violin is polyphonic.” Bach also informs his decision to close his solo performances with a standard—in this instance Victor Young’s “My Foolish Heart”—to assert the violin’s autonomy. His interpretation thereof looks in the proverbial mirror, hoping to recognize itself but instead finding awe in what it has become.