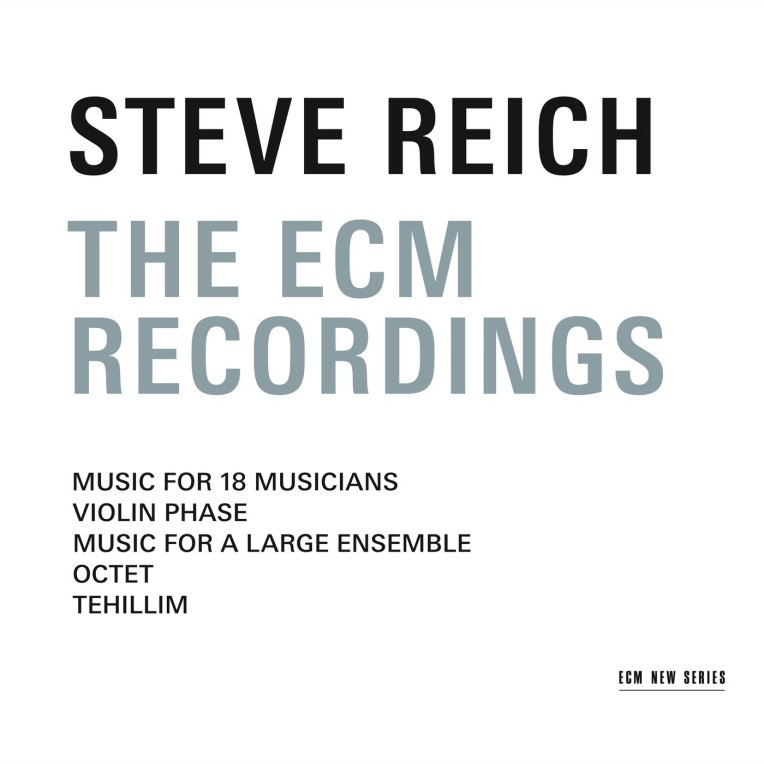 Steve Reich creates more than music; he renders his sound so systematically as to make it seem organic. Like the frond of a fern or the edge of a tide’s diurnal crawl, it reveals internal order upon inspection, working its fractal splendor at the most intimate of listening levels. At their heart, Reich’s compositions are precisely that: aggregates of base elements working toward a larger conveyance of meaning. Their pulse is their nervous system, insisting on linear paths in a tangle of mortal spirals. But as Paul Griffiths notes in his booklet essay for this essential boxed set, Steve Reich struggled to find a recording home, despite a few standalone releases on other labels, and the fact that by this time he was in his forties and had established himself as a musician and composer of international renown. Part of the problem was how to market it. It wasn’t quite or just classical, but a unique amalgam drawn as much from rock music as West African drumming. And while Deutsche Grammophon had made a recording of Music for 18 Musicians in Paris, it wasn’t until ECM head Manfred Eicher heard it that it saw the light of day. “It spoke to the time,” Griffiths goes on, “and to some extent it still speaks of that time, when the Vietnam War was recently over and in most western countries a social revolution had been accomplished under pressure from below. It speaks of optimism and harmony and drive and progress.” 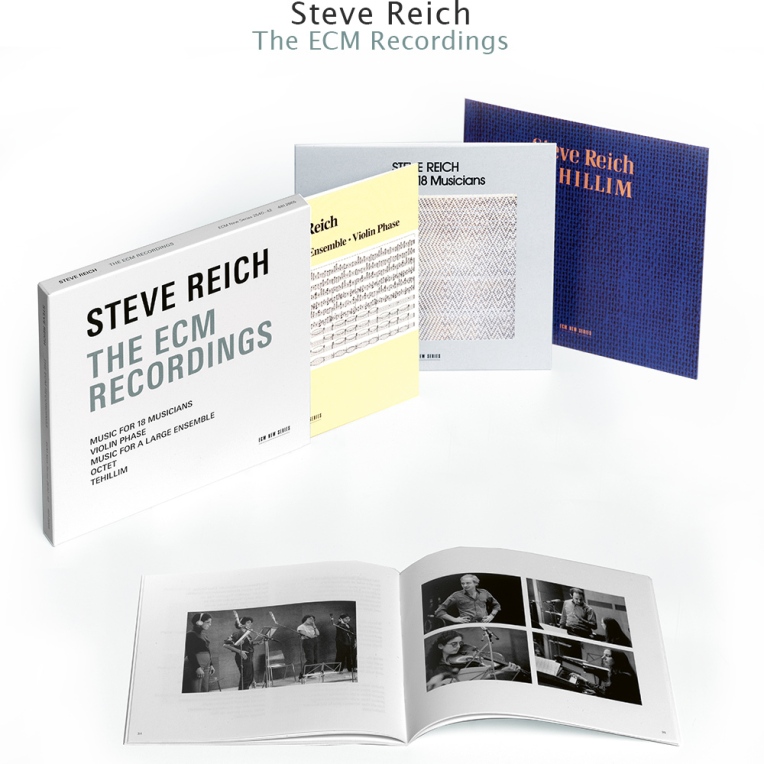 Whatever their political, social, or geographic connections, the three albums collected here are as historical in scope as they are in ECM’s preservation. With barest means—the primordial contact of living flesh on dead—Reich and his cadre of dedicated musicians offer a three-dimensional experience unlike any other. And while it’s easy to differentiate the intimate details between each recording, hearing them under a single banner reveals powerful interrelationships and dialogues in service of a growing aesthetic. From the unhidden methodologies of Music for 18 Musicians to the numerological mysteries of Tehillim, one finds a spectrum of emotional receivers flipped on in glorious succession. 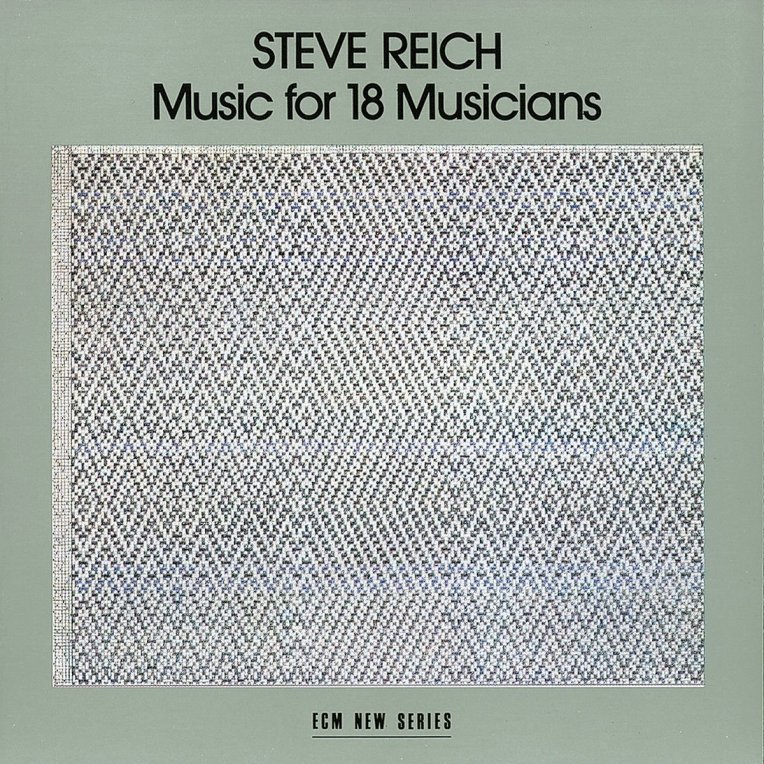 Music for 18 Musicians makes no efforts to obscure the methods behind its construction. It shows us mysteries never notated. The piece is scored for violin, cello, 2 clarinets doubling bass clarinet, 4 women’s voices, 4 pianos, 3 marimbas, 2 xylophones and metallophone (vibraphone with no motor). With his characteristic attention to detail, Reich utilizes these instruments not necessarily for their evocativeness, but for the varied ways in which their timbres can be blended in a nearly hour-long wash of sound. Movements herein are at once linear and multidirectional. Reich’s notecraft commits to its own agenda while grafting on to many others along the way.

It all begins with a living metronome of piano and mallet instruments before a chorus of breaths (via throat and woodwinds) convenes. The interweaving of these strands reinforces the compositional density, like marrow and nerves attaching themselves to a spinal c(h)ord of aural design. Indeed, what develops is one active body of which instruments are the genetic code. And while vocal utterances function as extensions of manufactured instruments, they lend fragility to the underlying spirit at hand. They rise and fall, slowly replaced by clarinets as if one and the same.

Sudden changes in rhythm serve to reconfigure our attention to the intervention of the composer’s hand: just as we are being lulled into a sense of perpetuity, akin to a natural cycle studied from afar, we are reminded of listening to a human creation. This awareness invites us to share in its re-creation through the act of listening. Like much of Reich’s music, Music for 18 Musicians is nothing if not accommodating. Rather than patronize or proselytize, it bares its bones. This brackets Music for 18 Musicians off from much of the histrionic art music in vogue at the time of its creation (1974-76).

The recording quality of this album is ideally suited to its subject matter. A sense of “clusteredness” prevails, such that the performers never stray too far from the nexus of their unity, while also providing just enough breathing room (performers’ lung capacities determine the length of sonic pulses throughout) for individual elements to shine. Most of the mixing, as it were, is done live by the musicians themselves, and requires attentiveness on the part of the engineer to highlight that interplay without overpowering the core. 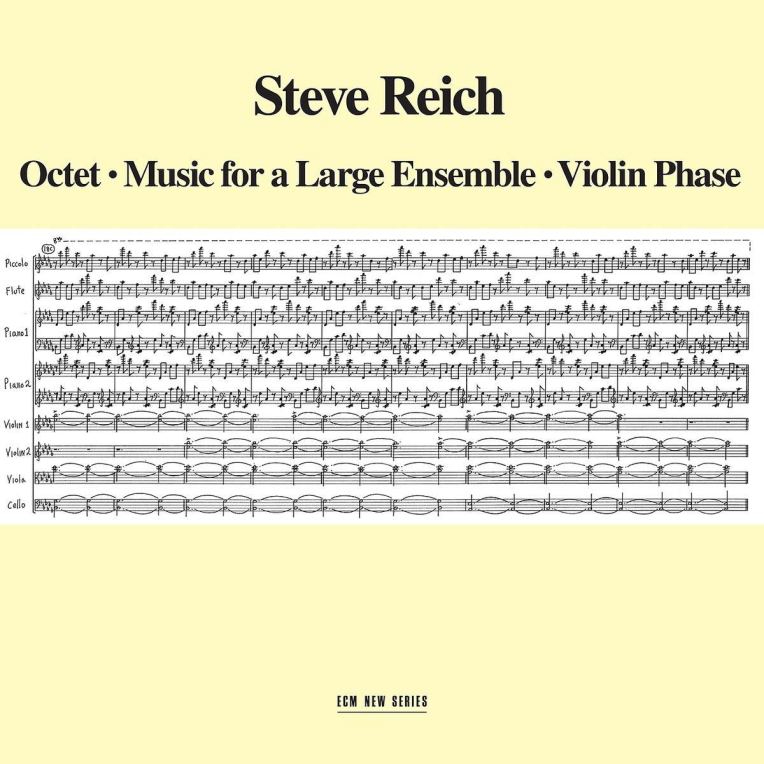 Have you ever repeated a word over and over again until it loses meaning? Cognitive science calls this “semantic satiation.” Now imagine that someone could do the same thing for instruments and you’ll have a clear idea of the power of a Steve Reich composition. In this selection of three longer examples, we get exactly that: an unraveling of music’s linguistic shapes, transformed from within.

The instruments in Music for a Large Ensemble fit into a vast sequence of aural DNA, as logical as it is mystifying. Every voice is given ample space in a piece that, while densely layered, is as airy and fractally ordered as a puff of windblown dandelion. Strings waver with the unrelenting heat of a desert sun, horns ebb and flow in a brassy wash of equilibrium, and a vibraphone rings out like magic over all. Although the music moves mechanically, its texture is organic. This earthiness is maintained in Violin Phase, which consists of a repeated motif that, as with all of Reich’s “phase” pieces, is knocked just slightly out of alignment by the doubling voice, like two turn signals rhythmically staggering and realigning. This is the most localized of Reich’s phases, clearly rooted in the bluegrass fiddling tradition. The violin grinds like sand, small particles swirling and separating yet holding fast to some invisible predictability. After two such strikingly different pieces, the Octet somehow comes across as the most intimate. The inclusion of wind instruments, in particular the clarinet and flute, adds a crystalline contrast, leading to a glorious and sudden silence.

Albums like this and Music for 18 Musicians will easily make one lose track of time. Both are tessellations in sound, each image shifting through time and space like an Escher print, so that what begins as a diamond ends up a bird in flight. Naturally, the precision required to play Reich’s music is a feat in and of itself. That such a synergistic cast of musicians could arise out of the work of one composer is by all accounts spectacular, and when so lovingly recorded their cumulative effect is heightened. This is music that finds its expansiveness internally, charting the waters of our biological oceans until we come to our beginnings anew. 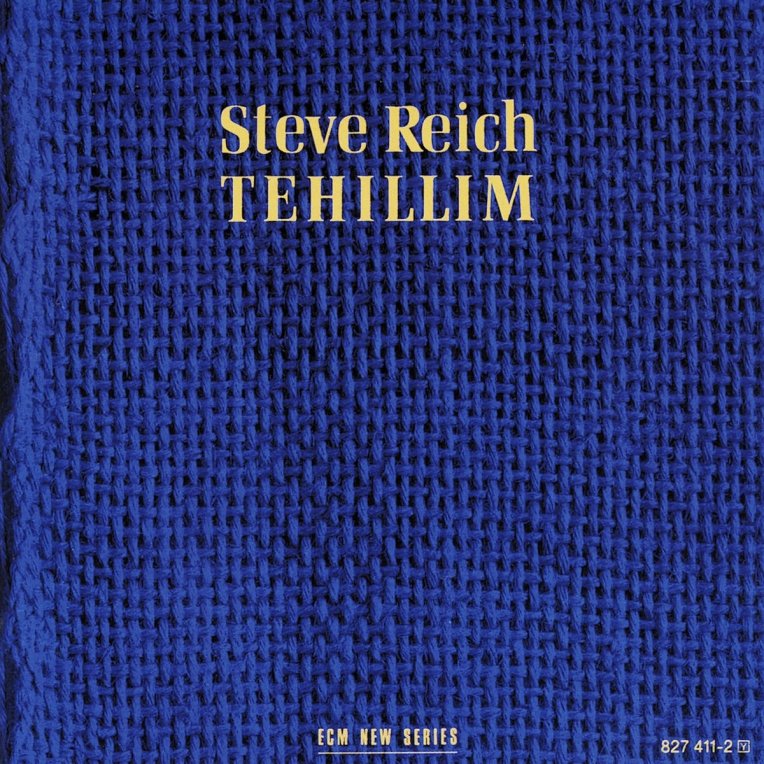 Human languages are contrived, insofar as they have undergone extensive sociopolitical reshaping. In Steve Reich’s Tehillim, however, words take on a self-sustaining feel, deeply rooted in the nutrient-rich soil of the composer’s instrumental configuration, and serve to dictate the flow of a seminal shift in American “minimalism.” Being the first document of this new path in Reich’s personal and professional development, this recording matches an endearing trepidation to every practiced gesture. This music, says Reich, may be “heard as traditional and new at the same time,” as it was both a way for him to explore his Jewish roots while weaving a fresh brand of secularism into the many liturgical threads at his back. At just under 30 minutes, Tehillimis a fleeting unraveling of that very fabric. 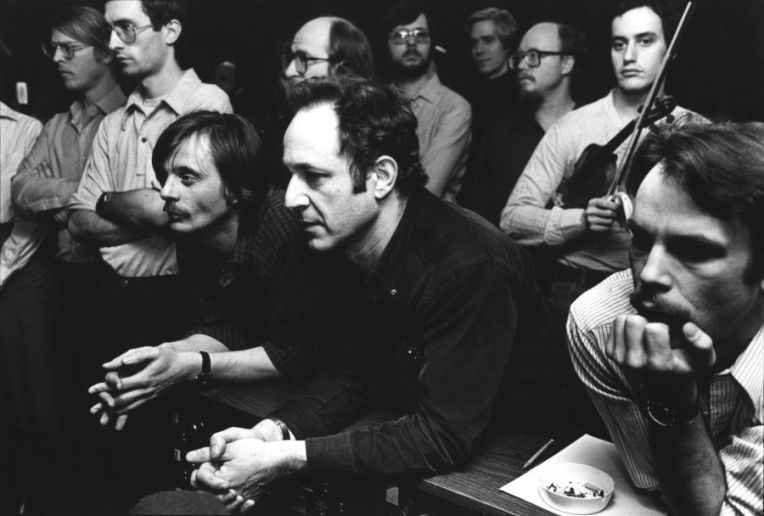 Tehillim, meaning “praises” and referring to the Hebrew Book of Psalms from which it borrows its texts, is more than a remarkable work. It is also a work of remarks. The scoring is built around a core of drum and clapping before introducing a female voice doubled by clarinet. This opens into a series of four-part canons against a backdrop of electric organs and maraca. Each melodic line—human and instrumental alike—moves distinctly, unaffected by the trappings of vibrato or other flourishes, as an imitative counterpoint works its way into the smoke of this short-burning votive candle. Part II carries the women’s voices into higher elevations in which the passage of time is marked by a light interplay of drums. Part III is the slowest of the four, ebbing and flowing with a breath’s involuntary precision. Like the most engaging of Gavin Bryars’s ensemble pieces, this section pulses with the quiet splendor of a deep-sea organism. The final part opens our eyes again to sunlight. With the barest assortment of auditory keys, it unlocks just enough doors to usher us into a more personal understanding of exultation. It can be no coincidence, then, that the derivation of the title—Hey, Lamed, Lamed (HLL)—also forms the root for “hallelujah.” And so, when the hallelujahs that close the piece spring up like so much plant life, they seem inevitable. Tehillim is the Tree of Life feeding off itself, bathing in the spores of the Word made flesh.

Despite having turned this triangle around in the inner ear more times than can be counted, I discover something new every time: proof positive that calling it “minimalism” is unfair both to Reich and to the ones among whom he makes these demanding journeys. Thankfully, all we need to join them is a mind prepared to receive every shift of terrain with humility and a body in which to house it.