Sing unto him a new song; play skilfully with a loud noise.
For the word of the LORD is right; and all his works are done in truth.
Psalm 33:3-4

Born and raised in Manila, Philippines, violinist Ruth Tumpalan is a dedicated musician and educator. She is currently a faculty member at the Lindeblad School of Music, where her pedagogical zeal has earned her a place of distinction in the hearts of students. She has studied with such renowned classical artists as violinist Christoph Poppen and pianist Gilles Vonsattel, and has performed with a range of others across genres, from Jaime Laredo to Michael Bublé. Most recently, she won first place in the American Protégé International Piano and Strings Composition, and as a result of that honor was a featured soloist at Carnegie’s Weill Recital Hall in New York City. Her focus on cultural diversity is paramount and drives her to constantly improve her technique in all areas.

Yet behind the glamour of performing on some of the world’s most hallowed stages, Tumpalan has found special fulfillment as part of the music ministry at Heritage Baptist Church in Manhattan. Her love of God and music have been intertwined since childhood, and manifest with especial depth in her work with the church’s choir as part of a vibrant ministry.

I recently sat down with Tumpalan via Skype to discuss the role of faith in her personal and professional life, asking first about her musical foundations.

“My father is a pastor, so we were all homeschooled, but when I was 10 he enrolled me and my siblings in an extension program at the University of the Philippines to study music. Two weeks later, I was playing in a Christian wedding officiated by my father. Since then, I’ve always played in church, both as a violinist and choir pianist.”

“After college, I played with the Philippine Philharmonic Orchestra, but after five years decided I wanted to develop myself even further through study. I had been praying since high school for an opportunity to study abroad, ideally in the U.S., in pursuit of new perspectives and higher standards. In 2014, God led me to a full scholarship to earn a Master’s degree at the University of Massachusetts.”

Tumpalan doesn’t take such blessings lightly and has always seen her gifts as God-given. While at UMass, however, she found herself at an impasse.

“There I was, halfway through my two-year program, contemplating what the Lord’s real will was for me. Did he want me to go back to the Philippines or did he have something bigger in store? It was a long journey, filled with prayer. But God provided, one step at a time, lining me up with a job before I even finished my degree. Although music had originally led me here to the U.S., I know in hindsight that it was actually God’s provision all along, working through all the little things to get me where I am now.”

Although Tumpalan’s husband was in Hong Kong at the time, he also earned a scholarship to study percussion at UMass, bringing them closer under an unseen but ever-felt guiding hand. They were further led to Heritage Baptist Church, where Tumpalan became immediately involved in the music ministry.

“Playing at Heritage is my priority. My job is important, but I like the need of going to church and being with brethren. It also enhances my career, leading me with strength through daily life and its many decisions. When I don’t go to church, even for just a week, I feel that my well-being is lowered.”

And what, I asked, of her experience playing at Carnegie?

“I never thought I would get to play there as a soloist. I’d played there before with the Philippine Philharmonic, and thought that was going to be a once-in-a-lifetime experience. But then, last year, I was working with an excellent pianist named Jongsun Lee, who suggested we try out for the competition. With my full studio schedule, it wasn’t easy to manage practice time and teaching, but my teaching actually helped me to prepare. Certain things my own teachers had taught me before suddenly made sense. I never expected to get first place, but God made it possible.” 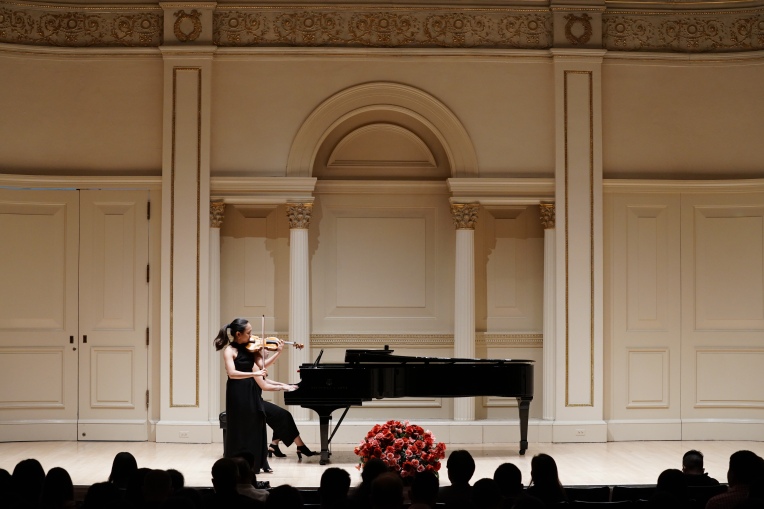 For that performance, she chose Henryk Wieniawski’s formidable Scherzo Tarantelle Op. 16, a work brimming with the very excitement that stokes her appreciation for music as a means of communication.

“The best feedback I’ve ever gotten as a musician is being told that I moved someone to tears. In that respect, in my playing I aim to be more of an inspiration, to connect with people at a level beyond words.”

This approach is integral to Tumpalan’s teaching, which builds upon the renowned methods of Shinichi Suzuki.

“I always make sure to explain to parents that the Suzuki method was designed to create better human beings through music, and that the most important things to learn from the experience are discipline, empathy, and cooperation. These are more than musical skills; they’re life skills. Without them, playing well and achieving success in music mean nothing. Whenever someone makes a mistake in my group classes, no one is allowed to point. They must respect themselves, first and foremost.”

As for the future, Tumpalan sees herself becoming even more involved in the church, and has been considering putting together a book of Christian music arranged for various instruments. Whatever may come, her faith will only continue to grow.