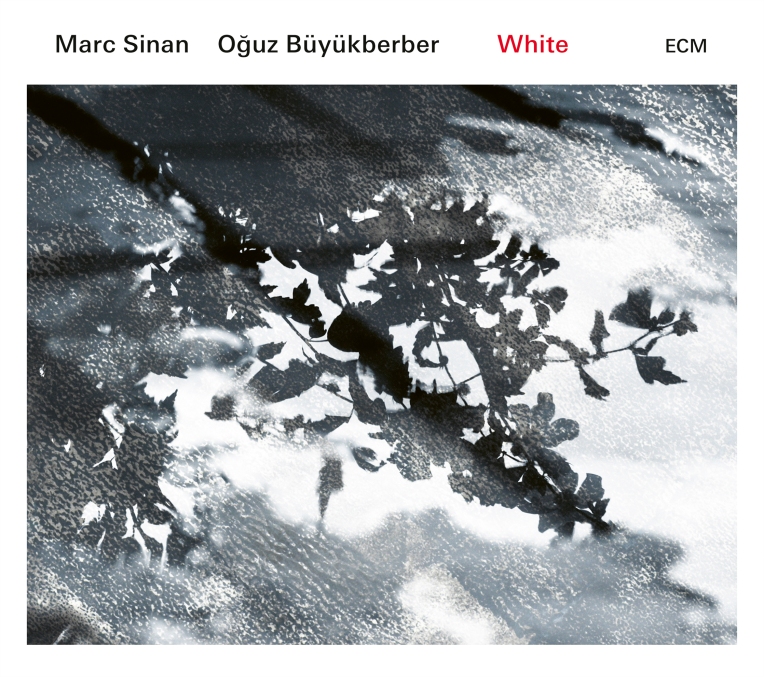 No matter where I am yet I shall not forget our mournful songs,
Shall not forget our steel-lettered books which now have become prayers,
No matter how sharply they pierce my heart our wounds so soaked with blood,
Even then I love my orphaned and my bloodied, dear Armenia.
–Yeghishe Charents

On White, German-Turkish-Armenian guitarist Marc Sinan and Turkish clarinetist Oğuz Büyükberber join more than forces, blending history and all-but-forgotten biographies into a mosaic of reckoning. After working together in the much larger ensemble of Hasretim: Journey to Anatolia, they now present their first recording as a duo, and the result of their collaboration is one of the most ghostly albums to be released on ECM in recent years.

The program consists largely of a suite by Sinan entitled upon nothingness. Combining field recordings from 1916 of Armenian prisoners of war in German detention camps, it is divided into colored subsections of yellow, blue, green, white, and red. The field recordings add a sense of mystery, trickling from cracks in the wall around this unthinkable past while also seeming to scale said wall from a peaceable future. Caged folksongs—each a cry for freedom in places where such a concept feels as distant as the sky—act as catalysts for our two performers, who in their present clarity touch the looking glass of retrospection as if it were a talisman close to breaking. Electronics flood the air, foregrounding inner turmoil.

Sinan’s guitar is multivalent, at one moment tracing a barbed yet invisible border of hatred around the afflicted while the next igniting that ring as a halo of grace. Tents and squalid conditions peak from the images of a lost era like glaciers whose tips only hint at the immense traumas fanning out beneath the surface of a collective amnesia. As lost souls whose only hope is to be grasped like wisps of creative thought, their echoes give rise to electronic embraces wider than any arms of flesh could accommodate. In the album’s eponymous “white” section—a guitar piece written by Büyükberber and transformed by Sinan—we encounter shooting stars, forced to observe from a darkness without ornament.

Interspersed throughout is Büyükberber’s five-part there. Painting a more straightforward, though no less inspired narrative, it strikes a free jazz kaleidoscope, opening windows into windows into windows. Sheltered by their fragmentary architecture, symbiosis becomes the norm, and we as individual agents the exceptions taking in their stories as if they were our own.