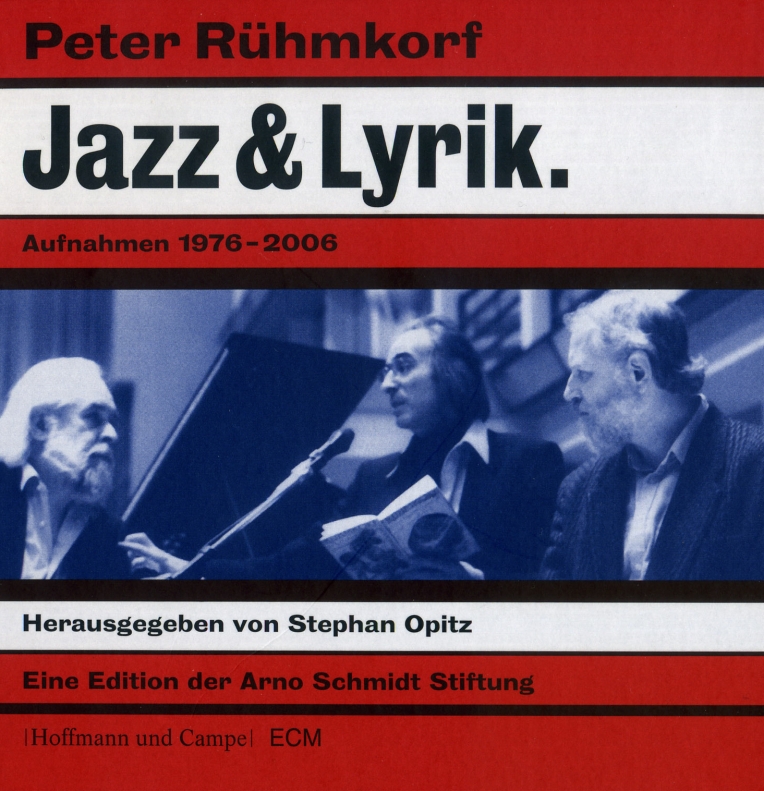 Jazz & Lyrik names a genre that might never have existed as such without Peter Rühmkorf (1929-2008). Together with pianist Michael Naura, vibraphonist Wolfgang Schlüter, and a host of other talents, the lauded German poet and essayist brought a consistent physical quality to his spoken artistry. It’s a characteristic he quite consciously cultivated: “I’m also a bit like an instrument,” he said in 1985. “My poems are fixed, like the keys on a piano. Only I must strike with the voice. The poem I read is my instrument. I just have to intone it.” While the form of jazz poetry presented in this 3-disc treasure trove, an archive coproduced by Hoffmann und Campe in collaboration with ECM Records and with support from the Arno Schmidt Foundation, reached its peak in the 1960s, the recordings documented here span from 1976 to 2006. The former year was a watershed one, when Rühmkorf recorded Kein Apolloprogramm für Lyrik for ECM. On that album, from which eight tracks are included, he joined forces with Naura, Schlüter, and bassist Eberhard Weber, yielding such phenomenally descriptive morsels as “Tagebuch” and “Zirkus.”

Yet this album’s most valuable rarities are in its live recordings—delightful not only for their historical value, but also for the insight they provide into Rühmkorf’s effect on an audience. The standout in this regard is “Variation auf »Abendlied« von Matthias Claudius,” from an 18 September 1994 performance. As Rühmkorf riffs on the lyrics of Germany’s most beloved lullaby, he brings an improvisatory quality to the reading, so much so that the applause that follow it feel like those given after a jazz soloist passes the torch. The arrangement by Naura and Schlüter is as heartwarming as it is sincere (it’s also among the more pristinely recorded of the live selections).

This set also traces the afterlife of Phönix Voran as it played out in radio broadcasts from 1987, 2001, and 2005. These unlock secrets in that album’s highlights (especially “Komm raus!”) and others that never made it to the studio (“Einen zweiten Weg ums Gehirn rum”). The addition of guitarist Titus Vollmer in the middle performance is magical, as is the effect of hearing Rühmkorf’s voice recite the title poem on three separate occasions over a period of nearly as many decades.

Other noteworthy selections include the self-styled studio composition “Elbterrassen,” in which Rühmkorf beats over a recording of “C Jam Blues” from the Johnny Griffin album At Onkel Pö’s Carnegie Hall, Hamburg 1975; “Früher, als wir die großen Ströme noch …,” a 2005 performance featuring a rhythm and horn section, along with the less tangible instrument of Rühmkorf’s sly humor; and “Betr. Rundfrage Grundfrage,” a 2006 interpretation of a 1998 poem whose domesticity meshes beautifully with the intimate microscopy of pianist Dietmar Bonnen and bassist Andreas Schilling.

Rühmkorf had a wonderful way of speaking, at once in rhythm with the music (if not the other way around) and wandering its own path freely alongside it. What a significant achievement to have it so lovingly preserved, especially in such a mosaiced fashion. As the title of “Bleib erschütterbar und widersteh” reminds us: stay shattered and resist glory.