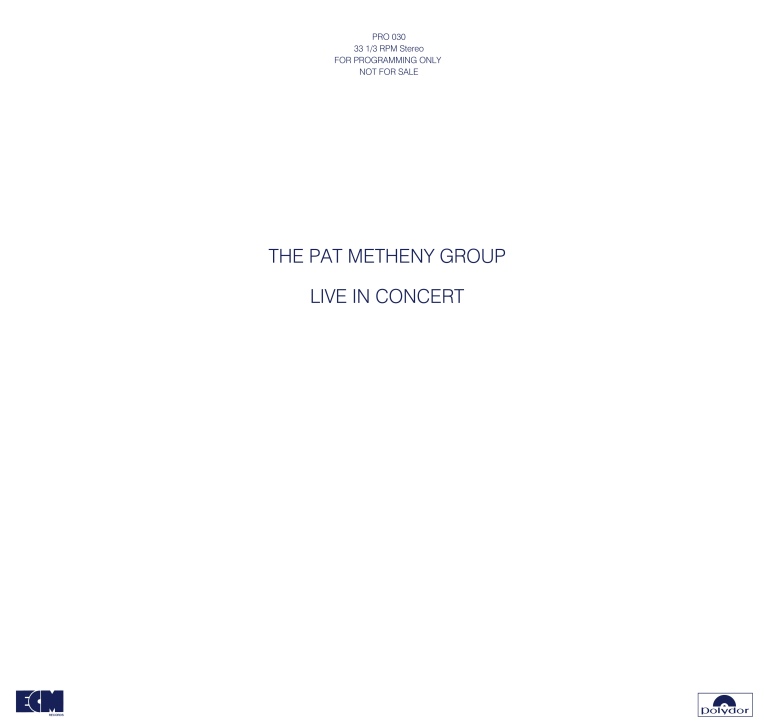 This rare promo-only LP documents two live radio broadcasts from the summer of 1977 by the Pat Metheny Group. Three of the four tracks are taken from a performance at San Francisco’s Great American Music Hall as heard on KJAZ, while the outlier, “San Lorenzo,” was heard on KZAM from a performance at the Seattle Opera House. That latter tune is a thing of archival beauty. First, we get to hear Metheny introducing to the crowd what has since become a staple of the band’s repertoire as a “brand-new one.” Second, Metheny gives brief insight into its “odd tuning for the electric 12-string” and by extension into his process. This information only heightens our wonder at what transpires for its effortlessness of execution in a nascent stage, while also cluing us in on the historicity of its coalescence. Moreover, Metheny and company play it more slowly and enigmatically than on the seminal album they would record for ECM a year later, thus allowing keyboardist Lyle Mays a horizon’s worth of space in which to dance.

Mays, by any stretch of the imagination, is the highest mountain on that horizon (its peak now glowing more brightly than ever in the light of his recent passing). The greenery he paints in “Watercolors” drips as if after a rainstorm of hope and nostalgia. Amid drummer Dan Gottlieb’s glistening cymbals, he pays deference to an underlying ether. Gottlieb shines also in “Phase Dance,” which opens the album. In this setting, it immediately becomes apparent just how much ECM production brings out from certain configurations. Hearing the Pat Metheny Group in close quarters like this allows individual lines to rise lucidly, leaving us to imagine the depths extracted in a studio setting. Either way, it’s glorious to hear the band’s vibrant turns of phrase. Mark Egan’s electric bass is the backbone, flexing in harmony with every shift of weight. The excitement of the crowd is also palpable, and shows how well-traveled the music was on the road before it landed in the studio a year later. It’s worth noting that the title here is misspelled as “Phase Dancer” on the LP sleeve, as it may just be the most accurate description of Mays’s mode throughout the lesser-heard “Wrong is Right.” Its vivacity, to say little of Metheny’s golden solo, shows what can happen when musicians and listeners share the same oxygen. As KZAM-FM’s then-music director Jon Kertzer writes on the back cover: “Forget about jazz-rock fusion and who played with whom and where. Just sit back and listen to the music—some of the most refreshing and creative sounds that I have heard in a long time.”