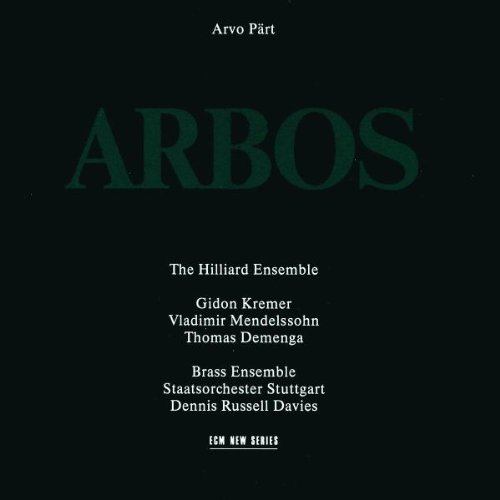 The music of Arvo Pärt, says Wilfred Mellers in his liner notes, is “concerned with the numinous”; as direct a statement as one can make about the sounds contained in this relatively neglected disc, overshadowed as it often is by the popularity of Te Deum and Tabula Rasa. For those new to Pärt, the wide selection represented in Arbos makes a solid primer. From the succinct to the majestic, the listener is treated to a carefully programmed process of transformation, culminating in one of the great masterpieces of modern choral literature.

The journey begins with the title piece, a terse blast of energy scored for brass and percussion. While cacophonous and chromatic, it is also perpetual and dark, providing the core for the “Dies irae” of Pärt’s later Miserere. On its own, it swirls into a self-sustaining galaxy that becomes more ordered with distance.

An den Wassern zu Babel saßen wir und weinten renders the well-known “By the rivers of Babylon” passage from Psalm 137 in a series of lilting triads, alternating between men’s and women’s voices. Here and elsewhere throughout the album one encounters the essence of the composer’s “tintinnabuli” style. Sustained tones from organ thread a line of subdued vocal beads, reaching ever higher, only to fall like kites whose strings are cut.

Pari Intervallo provides respite from denser surroundings. Comprised of gravid lead tones resting on a blanket of softer commentary, it is a funereal postlude, waiting and watching as the end draws near, promising not cessation but new life in its reverberant heart. It is a sublime meditation on the meaning of divinity and the divinity of meaning, a soul left unscripted by the wayside, where it can be captured neither on paper nor in sound. And yet, here we find an attempt to sketch its contours against our better judgment, against our feelings of inadequacy, against our assumptions of complexity in all things spiritual. In this piece we find the fibers that bound the garments of Christ on the cross, the creaking of knees of those who knelt at his feet. Pari Intervallo shimmers like heat distortion, moving with the force of a slow tide before receding into a still sea.

This is followed by Pärt’s stunning De Profundis, which also makes an appearance in the Miserere, if augmented by a broader choral palette. Different also here is the recording, which is less spacious (the bass drum, for one, is far more present). The voices are allowed to luxuriate in their own fallibility, in that beauty of impermanence that makes them human. In exposing its fragility so readily, the music becomes resilient. An organ provides the waters upon which this vessel of music floats, while a gong adds a dual note of ceremony. Whereas this piece brings us to the end in Miserere, as a standalone composition it seems to suggest a beginning.

Es sang vor langen Jahren sets a German poem (text and translation available here) by Clemens Brentano (1778-1842) for alto, violin, and viola. Alto Susan Bickley weaves a delicate song in this bare setting. Her tone is rich, as if residing somewhere in the back of her throat, heard before it is seen. The strings are like a lectern upon which the poetry rests, its pages bronzed with age.

Next is Summa in its original choral version. It is the quintessential Pärt composition: balanced, lush with triadic splendor, and concise. Along with Fratres in its many guises, Summa is a red thread in Pärt’s oeuvre and shines in this heartfelt performance.

This is followed by a curious reprise of Arbos that may divide listeners. Either way, it startles us from our reverie before pushing us into another.

At last we come to the highlight of an already fine disc: the 1985 Stabat Mater for 3 voices and string trio. The downward movement of its opening strings presents us with a unique metaphorical inversion. Where many a Stabat Mater works toward transcendence in its mourning, here we are brought from Heaven to Earth, even as we know that we must look from the latter to the former. The voices are the Trinity in a single open Ah, as if to spin their grief beyond the confines of language. Only then, after a brief comment from strings, does the text reveal itself. David James is the standout performer here, leading the way to a more rhythmic passage, echoed sul ponticello. Soprano Lynne Dawson enters like light through a window, bringing a maternal edge as she joins with James in duet, dotting the frosted glass of eternity with her warm fingertips. From Mount Zion they overlook the valleys—as green as they are brown—until everything that we have known is washed away in sound.

On the whole, Arbos goes down like a potion brewed in a vast melodic crucible. This is music that revels in its own exiguousness, for it is within those empty spaces that the greatest discoveries await us.