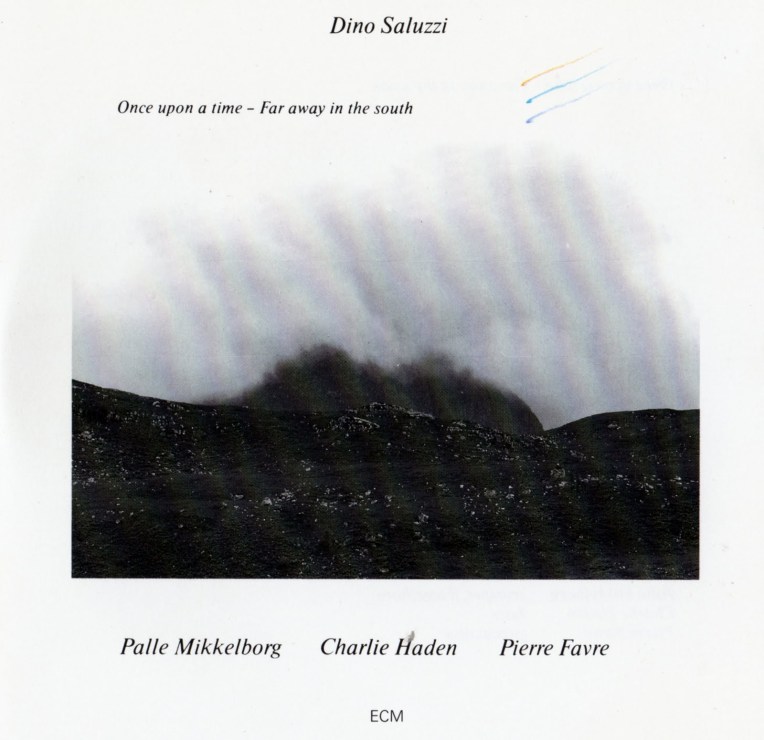 Dino Saluzzi
Once upon a time – Far away in the south

There is an effusive quality to bandoneón virtuoso Dino Saluzzi’s art, one that speaks of the past, which through slogs of time becomes recoverable through the hope of performance. Listen to the sonic photograph that develops in “José, Valeria And Matias” this becomes clear. Every face is a memory incarnate, speaking with the voices of a hundred. Bassist Charlie Haden and trumpeter Palle Mikkelborg round out the album’s histories, along with percussionist Pierre Favre, whose rustlings shake a metallic tree of its own. Mikkelborg proves himself more than adaptable to these uncharacteristic circumstances, and Haden, as ever, is no mere accent but a living, breathing songster, ever open to the resonance of harmony. The titles of each track tell stories in and of themselves while also telling a larger narrative together. “And The Father Said… (Intermediate)” strings a contemplative (and what about this album isn’t?) duet between Saluzzi and Haden (who broadens the reflections that so deepened “José…”) before Favre’s earthly drums draw us upright into “The Revelation (Ritual).” Over a swelling gong and skipping snare, Mikkelborg and Saluzzi spin a frantic spell. “Silence” is a heartening solo from Saluzzi that ebbs like the tide and saunters into the verdant landscapes of “…And He Loved His Brother, Till The End.” Mikkelborg’s sensitivity swings in slow motion here from Haden’s tether. Favre returns in “Far Away In The South…,” painting the empty spaces with his embracing nature. In this 16-minute saga of intimate proportions, we get the album’s most dynamic changes, a mosaic of improvisatory energy, a sometimes-playful excursion into recollection. The quartet finishes with “We Are The Children.” The sun of this anthem burns away the rain, bringing together each signature in a field recording of children at play.

Once upon a time… is a language unto itself, a study in movement and matter. This recording is also a testament to ECM’s meticulous production values. Guaranteed to wash your soul clean.