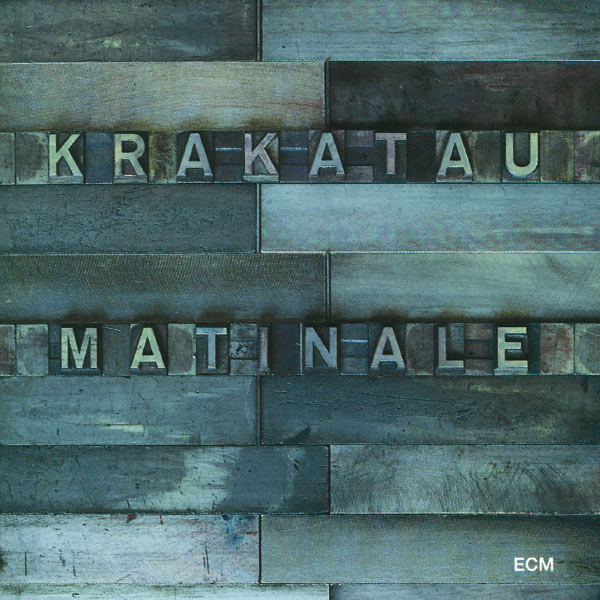 Krakatau is an ever-exciting fusion project from Finland that left two broad gasps on ECM. Matinale was the second, and remains the more politically astute of the pair. Guitarist Raoul Björkenheim is the main compositional force behind the album, and leads a quartet of hip multi-instrumentalists squared out by reedman Jone Takamäki, bassist Uffe Krokfors, and drummer Ippe Kätkä. The title track emerges from the gates with a blast of fresh energy in which Björkenheim and Takamäki dominate the left and right channels vying for the middle ground, which has been claimed as the rhythm section’s sole territory. Steve Lake’s deft production and Martin Wieland’s pointed mixing only enhance this plus sign, for the album is indeed all about the additions each musician brings to bear on this visceral studio date: (1) Björkenheim, a distorted and bubbling cauldron of emotional whiplash, (2) Kätkä, a persistent flavor one can’t quite brush out, (3) Krokfors, a counterweight to the constant threat of imbalance, (4) Takamäki, a smoothness that can be buttery yet also knows how to crack a wry smile now and then.

Three improv sessions follow this opening chunk. Krokfors’s bass hums like a sleeping whale through the roiling gong and windy shores of “Unseen Sea Scene,” dreaming of the Chinese gong and reeds of “Jai-Ping.” Björkenheim interrogates his lucrative solo here like some criminal aria, matching Takamäki’s incisions drop for drop until they are bled dry. “Rural,” on the other hand, is a bass-heavy piece that manages to be light on its feet, borne along by an entourage of low reeds.

After a mournful intro, “For Bernard Moore” blossoms into life through a frenetic bass and cymbals. It fast-forwards through that life with a lush sax solo, only to be retold by a tighter guitar line. Excellent stuff. Yet at twelve and a half minutes, the album’s meta-statement is “Sarajevo.” Björkenheim opens with something like a folk song before pressing onward into a viscous and sometimes morose landscape of ruin. This is a portrait in stark color of a body whose language is a bowed head. Sounding here like the vamp of a carnival organ slowed into frightening pathos, and there like a body struggling to be heard from under the rubble of a senseless act of destruction, it seeps into the bones like empathy. To keep us from falling too far, “Suhka” offers a dance of light on water by enacting the very song that has set it into motion. To finish, our fearless foursome slake a “Raging Thirst” with undeniable conviction.

Matinale reshuffles its own formula with every cut, and provides a window into Krakatau’s uniquely personal process. Don’t overlook it.