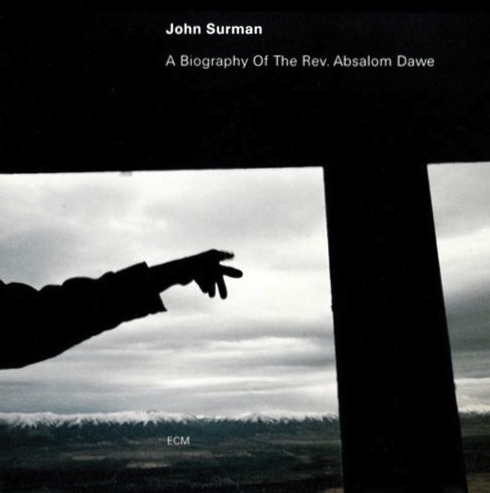 John Surman
A Biography Of The Rev. Absalom Dawe

I would venture to say that anyone who has dug into the trove of ECM’s 1980s output has a soft spot for John Surman’s lone outings. The English reedman brings a signature sense of purpose to every musical line he touches, whether it’s by mouth through his favored baritone or by hand, laying down tasteful electronic contexts for looser improvisations. Now well into the 1990s, Surman outdid himself with A Biography Of The Rev. Absalom Dawe, treating listeners to his most deeply realized solo experience yet. Named for a cousin of Surman’s great-great grandmother, Biography employs the usual studio trickery for a sound that is wood-grained, born of earth and sky. “First Light” highlights another preferred tool in his kit—the bass clarinet—and grows from it feathers like no one else can. Following this dawn chorus for one, he plucks out yet another, drawing the needle of his soprano—honeyed but never saccharine—through the diaristic airs of “Countless Journeys.” Moods vary thereafter, cycling through the orthodox (“A Monastic Calling”), the pagan (“Druid’s Circle”), the questioning (“The Long Narrow Road”), and back into the unity of “Three Aspects,” which braids a trinity of sopranos, from which one breaks strays like a firefly to the far side of a darkening field. In addition to these evocative poems, “Wayfarer” and “The Far Corners” are among Surman’s best, the one somehow dancing bass clarinet on the head of a pin, the other paying homage to tone in a soprano solo for the ages. This leaves only “An Image,” refracting baritone lines through an echoing prism.

Surman brings out, especially through this album, a distinct sort of programmatic expression, which through its inflections evokes environments so internal they cannot be rendered, except through the gift of his interpretations.