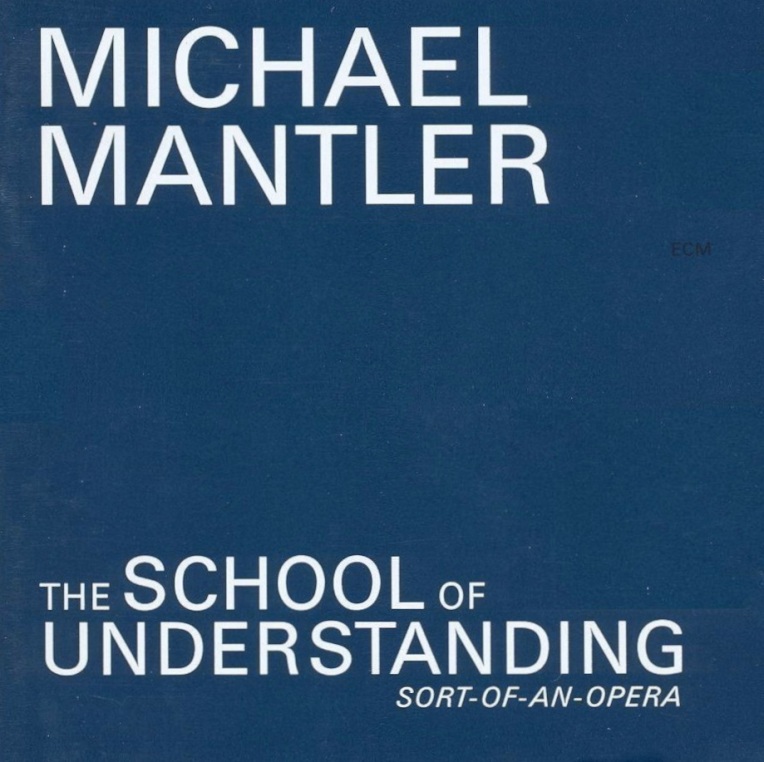 Michael Mantler
The School of Understanding

Thus do we look into the heart of Michael Mantler’s magnum opus, The School of Understanding. Originally called The School Of Languages, the piece’s central theme came out in its final title, for which the composer did not, for once, work with Heiner Müller and wrote his first libretto instead. Mantler calls this “sort-of-an-opera” not just as a humble gesture, but also because it is an expression of the music’s unwillingness to mask itself in romantic decorations. Rather, it emotes through a powerful cast that includes Per Jørgensen, Jack Bruce, Mona Larsen, Susi Hyldgaard, Karen Mantler, John Greaves, and Don Preston. Whether familiar or not, these names fade into the roles they now adopt. As Teacher and Observer, Refugee and Journalist, Student, Businessman, and Doctor, they bring essential theatrical elements to the offering table.

But like an opera, we begin where voices can have no foothold: in the breathtaking “Prelude.” This tremulous coming into being cracks like the skin of time, filling in every new border with musical information. Against the program’s soft palate, the harder strings bounce like a rubber ball into stasis, leaving behind a trail of dots and lines. This moves us into “Introductions,” during which Teacher brings a raw professorship to bear on the lives of his students, who open like college-ruled notebooks before him. Though bound in primary colors, their stories intersect in all manner of hues and combinations, while Teacher’s haggard monochrome reflects those starry-eyed gazes, those hopeful dreams, those tortured pasts, like unpolished silver. Occupations, aspirations, and inspirations fall to the linoleum floor—itself an incomplete jigsaw puzzle, the pieces of which will never all be found.

The voices are as distinct as their characters, blending histories as they drip like turpentine from an unwashed easel. Still, there is one who holds back until all ears are on him. One who speaks through the act of witnessing. One whose drama is sonorous, heart-stopping. “First Lesson” is a call to mental action, an acknowledgment of tools both given and made. There is only one book and an ever-present television screen, both conduits of words and concepts to the outside world, which itself lies in ruins. And on that screen, we encounter the “News,” a catalogue of inhuman affairs, a string of adjectives, and a slow-motion punch to the winded gut of relevance. The hypnotic pulse of reiteration throws us into the quicksand of information. The orchestral colors that began the piece now merge into a tracking marimba and Mantler’s trumpet. The latter is the occasional placating force, adding brief but potent addendums to narratives of oppression.

There is also a satellite drama. We follow it from “Love Begins” to “Love Ends,” for it can never rise above fallacy in a world whose political architecture is brick-and-mortared with enmity. A clarinet takes off its shadowy muzzle to reveal a voice of reason and bleeds into a formative conversation, a date—as in dinner and a movie—that thrives on a hint of obligratory romance, yet which dies in the inevitable dismay of human connection.

“War,” in both length and content, is the heart of this composition, a tearful sermon on the iniquities of weapons and flesh which makes clear to us that this is a school not only of understanding but also of conversation, a school where education is nothing if not extracurricular. It is a church whose only preacher is whoever appears on a tendered note, and where terrorism is a font in which anyone may be baptized. The cry of an electric guitar bounces across faded frescoes. The students are shocked to realize that war is a reality one may live. The real learning begins in the knowledge that placing their minds in the hands of conflict is one thing, but that likewise placing their bodies is another entirely. An acoustic guitar is another veil of tears through which only the Refugee may see clearly to the memories beyond. She tells her story as might a mother to her child, as might a child to her mother. This street where once she ran is now a place of careful footsteps and homes reduced to ashes and dust.

We “Pause” for reflection and release, swimming through the confusions and contusions of “Understanding,” and awaken in the deeply rooted tremors of “Health And Poverty.” True sickness, we are told, ignores the corporeal and makes its nest in denial and vanity. Once the mirror is broken, we at last see ourselves for who we are, sucking life like parasites from those who need it most, those who’ve never known what it could be, to whom possibility is a passing ideology. Once suffering has clarified its cause, the rest of us latch on to the effect, as if it might give us answers. To the awakened mind, the truth is too much to bear, so that statistics become like words, speaking all too clearly. And while the banality of human interaction (“Platitudes”) is offset by alluring music, we check off our litany of exasperations in “Intolerance,” working our way toward silence, where only one question remains: “What Is The Word.” The Teacher’s voice grows distant as we fall from the source of all songs, sliding down the double-edged blade of knowledge, which both brought everyone here and glints with the promise of hard-won salvation. It cuts the playing field into same-sized pieces, repeating itself, repeating itself…

If you were ever unsure of Mantler’s genius before, then I can only hope this will convince you. The School Of Understanding is not the soundtrack to a film, but the film to a soundtrack. It scoops the idea of education like a dead fly out of stagnant water and resuscitates it to full buzzing flight. It is the pinnacle of Mantler’s craft. This definitive recording belongs on any “Best of ECM” list.