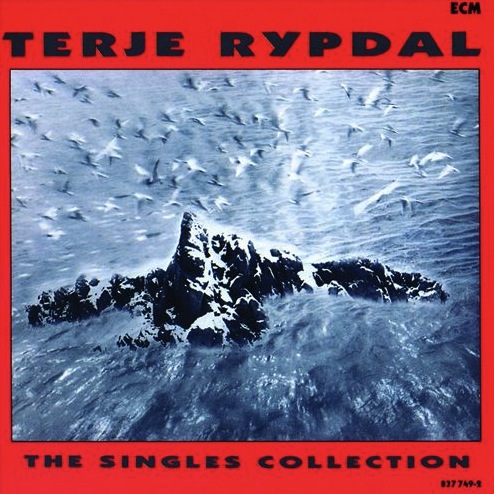 Long before ECM released its first remix album (for Nils Petter Molvær’s Khmer), it put out this, its first singles collection. Or so it’s nice to think: the title actually has nothing to do with the content. For their third album, Terje Rypdal & the Chasers instead spit out one of the most transcendent rock albums this side of the Milky Way. So much of that transcendence lies in the bandleader’s characteristic sere. When spurred on by the keyboard stylings of Allan Dangerfield and Audun Kleive’s clear-and-present drumming, he simply can’t go wrong. Yet what truly impresses me about this record is the playing of bassist Bjørn Kjellemyr. His sound, depth, and prowess are flat-out inspiring and constitute the red thread running through this set of 10 blistering cuts. His tight spirals in “Sprøtt” (Crazy), for example, rev up the action into the stratosphere, where Rypdal tills vast climates of thematic information over a nostalgic 80s beat and a Hammond organ so intense it’s almost vitriolic. “Coyote” is another Kjellemyr showcase. Along with the worldly percussion, his thrumming heart animates this track with Steve Tibbett-like expansiveness. The bassist isn’t all winces and head-nods, however, for in “Mystery Man” we find a fat slice of noir gilded in weeping tenderness. Still, he does wind a fuse that Rypdal follows into the passage of “The Last Hero,” lighting it into a hard-edged jam. Not to be outdone, of course, Rypdal cracks his whip with enough force to send us into the next county. The drum- and bass-heavy “U.’N.I.,” for one, is the perfect foil for his ring of fire, and in “Steady” he rides a rollercoaster whose tracks are marked by chromatic footfalls and skipping drums. He also excels in the slower numbers. From the twinkling synths of “Strange Behaviour” and on through the pentatonic infusions of “Somehow, Somewhere” to the final “Crooner Song,” he keens across the airwaves with the conviction of one who knows his emotions fairly and squarely. His provocatively titled opener, “There Is A Hot Lady In My Bedroom And I Need A Drink,” pretty much says it all, for here is a guitarist with a thousand stories to tell. With a powerful sense of development and musical architecture, his tunes are like landscapes razed and re-gentrified with every lick.

If you want to know Rypdal’s strengths as composer, you need look no further than Descendre, but for those who also want to experience the rawness of his talents on the axe, this one’s for you. Prepare to rock out.