“Is it not strange that sheep’s guts could hail souls out of men’s bodies?”
–William Shakespeare, Much Ado About Nothing

From, but not to: this is the direction Robin Williamson travels by. For his third ECM outing, the man who puts the “true” in troubadour rejoins viola player Mat Maneri and fellow multi-instrumentalist Ale Möller, and plays for the first time alongside bassist Barre Phillips in tapping a trove of words by Sirs Walter Raleigh and Thomas Wyatt, Ralph Waldo Emerson, John Clare, and of course Williamson himself. “The Climber” offers a transportive introduction to this album’s relatively distant considerations, carrying us up through the clouds and into the moist particles of their origins. Improvised around the bard’s words, the music crawls and stretches, working its gnarled trunk around such shadows as “There Is A Music”—an ode to becoming that is played, as he sings, on the harp-haired gods by the fingers of tomorrow—and Emerson’s “Bacchus.” The last is the most heart-wrenching song of the set, a tale of forlorn tendrils and other fermentations caught in a butterfly’s wingspan.

There is an aged quality to the medieval Scots ballad “Sir Patrick Spens,” which through the arrangement here concedes to the palettes of coarser skies. It is not by mere virtue of Williamson’s years but fundamentally by perseverance of the tune itself that cuts the strings of time and marks wherever it may land. The fragility of Williamson’s telling gives impenetrable strength to the verses. Despite coming early in the program, this song drips with finality, drinking its vagaries through the scratching of bows and wistful sighs. The jaw harp trembles like the hearts of its characters, their lives tossed about the waves like discarded and shattered casks. 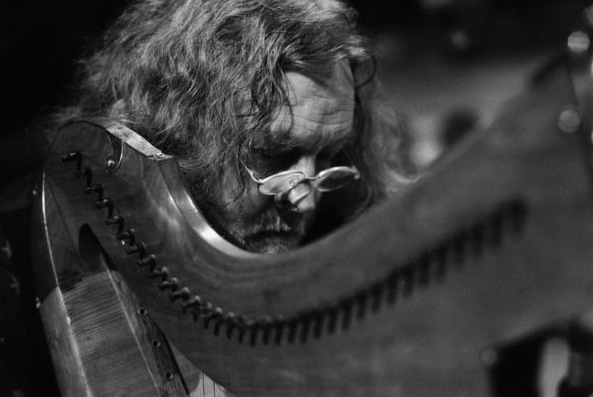 It is a stony and tender grave that harbors the melody of “Even Such Is Time,” which comes from “Lament For His Sister” by Rory Dall Morison—who, Williamson informs us in his liner notes, was one of the last traditional highland harpers—and replaces those words with Raleigh’s unconditional roundness. “Loftus Jones,” with music by Turlough O’Carolan, gets a vocal facelift. At Phillips’s suggestion, the group takes a “floating” approach to its wordless narrative. It calls to a different plane of our psyche, treading with carefully weighted soles on the sands of our adoration. Yet even these delicacies cannot help but dislodge a broken feeling or two from their interment, their bones having given up the ghost long ago for cloudy tragedies.

Also remarkable are this album’s evocations of animal life. A winding flute introduces us to “The Yellow Snake,” a somber tale of use and replenishment in a never-ending cycle of the elements of which the human body is composed and by which that same body does its deeds. “The Praises of the Mountain Hare” unearths a soothsayer’s gift, serrated like the mountain shawm that dances down its eastern slope, while in “The Badger” (Clare) Phillips’s scuttling phrasing mimes its eponym. A haunting instrumental epilogue draws us into “Political Lies,” among the more inescapable melodies of the Williamson songbook. In this tale of rearing recollections and broken realities, the history of mystery falls into its own rhyme and reason. The jangly slide guitar and thin-lipped poetry of the title track highlights a darkened wit about these follicles. “To God In God’s Absence” returns from its solo incarnation in The seed-at-zero in a fuller yet somehow more delicate version. No less intense for its adornments, it is Williamson at his finest. And there is, too, his stunning harp accompaniment to “Wyatt’s Song of Reproach,” a kiss to a visage half lit. “Verses at Ellesmere” is a flower of similar make. A ballad for his wife, Bina, if not also for love of balladry, it touches the ever green-ness of things and marks it with an insignia of most idiosyncratic design. These musings can only end with the open-ended “Henceforth,” which drops as a stone into a reflected sky, plying the reaches of dreams and bringing Williamson’s footprints full circle to the many copses and paths that hatch in his art.

The emphasis on spoken word and freer improvisatory elements on this record may polarize listeners. Nevertheless, let them not be a warning but an invitation. For in the grand scheme of sonic things, the truth of delivery reigns. The diction says it all: I am mortal, that I may sing of immortal things.