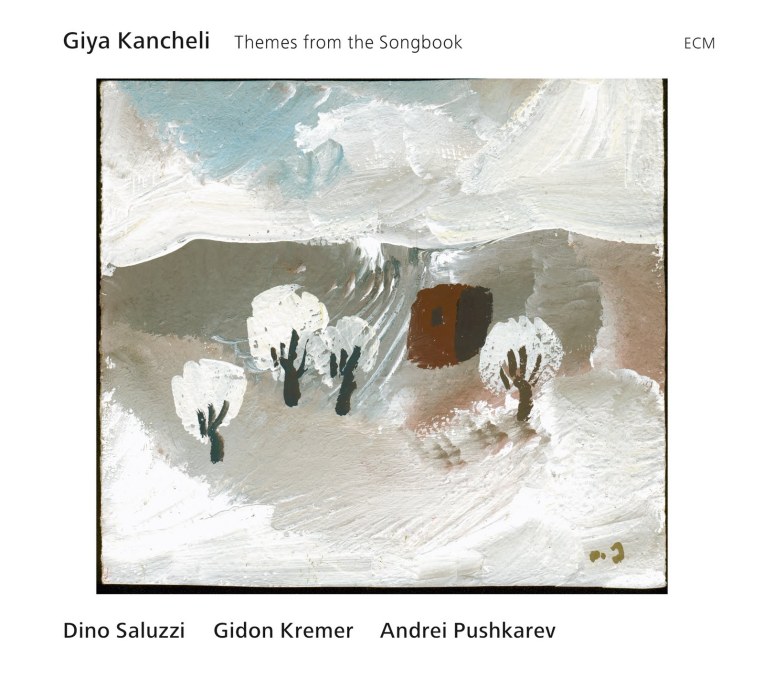 Giya Kancheli
Themes from the Songbook

Giya Kancheli’s first album for ECM’s flagship label is a major event. The Georgian composer will be more than familiar to New Series aficionados, who’ve had ample opportunity to acquaint themselves with his uncompromising sonorities, rich dynamic spreads, and recurring themes. Yet few of us will ever have known that he also developed a sideline—as did other (former) Soviet Bloc composers like Dmitri Shostakovich and Arvo Pärt, though none so prolifically—as scorer for theatre and cinema. One can see hear album as companion to the 2009 publication of Kancheli’s Simple Music for Piano: 33 Miniatures for Stage and Screen. The subtitle betrays little depth of his subsidy, which exceeds 100 unique productions. Although Kancheli humbly says in his preface of these songs, “Time will tell if they can survive outside their original context,” it is clear from this album that they already have. Their realization brings together an intimate cast, with producer Manfred Eicher as director. Bandoneón master Dino Saluzzi, violinist Gidon Kremer, and vibraphonist Andrei Pushkarev indeed move as if from behind a curtain, if not in front of a lens, bringing their sharp wit and live “editing” skills to an immediate yet highly polished sound-world. The inclusion of Pushkarev was a masterstroke, and his willingness to explore these themes is reflected in his collaborations with Saluzzi and Kremer in kind. Having recorded Themes as a surprise 75th birthday gift at Eicher’s suggestion, they bring lovingness to every motive and thus emphasize the preservation that flows by and within the art they share. And on that note, we have to thank, as does Kancheli’s son Sandro in his heartfelt liner notes, ECM for championing this music and its aftereffects, as might a cartographer love the land.

“Herio Bichebo” from Earth, This Is Your Son (1980, dir. Revaz Chkheidze) establishes a defining combination of vibraphone and bandoneón. The feeling is inevitably watery, its passage a boat adrift toward a mountain rife with ancestral longings. This atmosphere also sets the tone for the program’s careful use of pauses and suspensions. There is a forlorn quality, if not a sweet tenderness, to this introduction, wherein lurks the elegiac wave of Bear’s Kiss (2002, dir. Sergei Bodrov) and the grinding lows of When Almonds Blossomed (1972, dir. Lana Gogoberidze). Other cinematic highlights include the themes from Don Quixote (1988, dir. Chkheidze), which features an overdubbed Kremer and at once expresses the story’s inherent sadness and innocence, and the nostalgic disclosure of Mimino (1977, dir. Danelia and Gadriadze), for which Kremer joins Pushkarev. The latter draws out some of the deepest emotion in the main theme from Kin-Dza-Dza (1986, dir. Georgi Danelia and Revaz Gadriadze), shuffling characteristically Kanchelian bursts of exaltation into somber tiers.

All seven plays represented on Themes rose out of collaboration with renowned Georgian theatre director Robert Sturua, whose musicality marries well with Kancheli’s dramaturgy. The main theme from The Crucible (1965, play by Arthur Miller) marks Kremer’s first album entrance, his raspy bowing complementing the click of bandoneón keys to delectable effect. Saluzzi and Pushkarev reprise their chemistry in a carefree rendition of The Role for a Beginner (1979, play by Tamaz Chiladze), I daresay reaching subtle genius in As You Like It (1978). Memorable enough to be a jazz standard, it is a ballad that looks backward and forward as it spins in place to the rhythm of its heartbeat. And in fact, Shakespeare provides some of the deepest inspiration of the program, as in Saluzzi’s shadowy Hamlet (1992) and Pushkarev’s dynamic Twelfth Night (2001), which illustrates its story in flashes of light.

Jansug Khakidze, the late singer/conductor who was one of the composer’s closest friends, leads the Tbilisi Symphony Orchestra in an archival encore. His “Herio Bichebo,” warmly engineered by Mikhail Kilosanidze, is so iconic that many believed him to have written it. Listening to it here, one can understand why. Jan Garbarek fans will recognize his inimitable voice as the same behind “The Moon Over Mtatsminda” on 1998’s RITES.

Interestingly enough, Kancheli’s pieces for the stage sound the most cinematic, and vice versa. Together they comprise a daydream paginated and bound for travel. It is sure to please Kancheli veterans and newcomers alike, and will, I hope, inspire the latter to explore further.