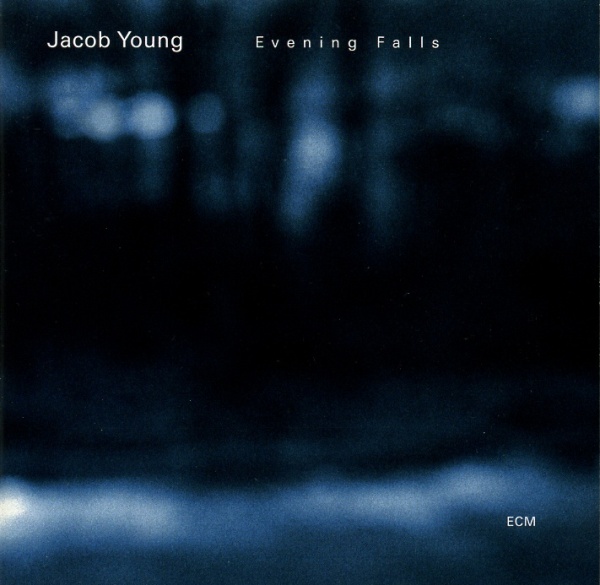 Considering the legion of Norwegian talents with whom Jacob Young has played, and of which he is one star in a constellation of them, it was perhaps inevitable that his sound should migrate over to ECM. Enter Evening Falls, the guitarist’s sensuous international debut for the German powerhouse following four albums on local labels. The Jacob Young Group, as it has come to be styled, finds him in the enviable company of trumpeter Mathias Eick, reedman Vidar Johansen (primarily on bass clarinet), bassist Mats Eilertsen, and drummer Jon Christensen. This who’s who of northern talent brings a wealth of history to the table, so that the lyrical results are not merely intuitive, but comfortable like worn-in denim.

That Young studied under Jim Hall and John Abercrombie is apparent in “Blue,” although one may also hear a bit of Bill Connors glinting off his rural edge. Young’s composing also spans territories, sounding one moment like a Tomasz Stanko ballad (check the brilliant, trumpet-driven “Minor Peace”) and for all at others like a dulcet etude (cf. “Falling”). The fluidity of his teachers shines through music that, although weighing little, is emotionally robust. There is warmth here, a love for life in all its colors seeping like rain through soil into all that follows. Eick connects the dots to another satellite reference—Kenny Wheeler, whose insightful laddering can be heard in the trumpeter’s nonetheless distinct soloing.

No one on this record, however, is as distinct as Young, who navigates ever-changing currents with the skill of an ancient mariner. Despite his acoustic penchant, he does plug in for a few tunes, notably “Looking for Jon” and “Sky.” The former skips by virtue of Christensen’s brilliant drumming and Eick’s clarion fluency, while the latter tune flies not like a bird but lilts as would a paper airplane thrown from a tall building. The effect is nothing short of profound. Even in the acoustic tracks, such as “Formerly,” Young’s playing shines with its own electricity. Either way, the dynamic checks and balances continue in “Evening Air,” in which Young draws bass clarinet and trumpet from hiding in a beauteous thematic braid. Guitar and bass play especially well off one another. Eick’s trumpet likewise flowers, while Christensen’s cymbals trickle in with the last rays of sunset.

In trio with Eilertsen and Christensen, Young carries the full weight of his compositions with the effortlessness of respiration. This nexus works in elastic, tactile fashion throughout, seesawing between Mediterranean reveries (“The Promise”) and slick turns of phrase. So synergistic is this core unit that it bears an album’s worth of weight in the web of its interplay. In light of this, Johansen’s contributions are more enigmatic but no less integral, although with one exception. His bass clarinet does wonders whenever it appears, charting the tailwinds of that which has preceded it, but on tenor saxophone he proves superfluous on “Presence of Descant,” of which Eick’s trumpeting leaves little room for embellishment. What this track lacks in a melodic frontline Christensen makes up for with masterful color, laying down a mood as few drummers can.

In the end, we are gifted a superbly listenable album with all the qualities of an old friend.