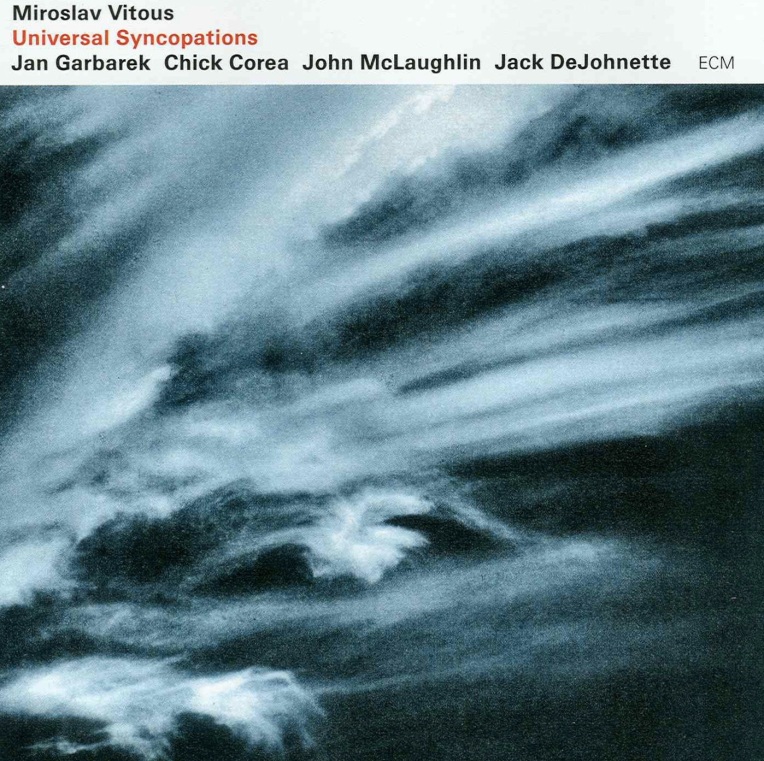 Miroslav Vitous’s Universal Syncopations is an ode to many things. To the late 60s, when he laid down the seminal album Infinite Search with guitarist John McLaughlin and drummer Jack DeJohnette, both featured on the present disc. To the purity of improvisation as a game of thrones over which melodic integrity forever reigns. To the joys of making music in fine company. Indeed, the Czech bassist could hardly ask for better session mates with whom to share the infinite search that is jazz. To that end, he is further joined by pianist Chick Corea and saxophonist Jan Garbarek, the latter of whom produces some of his liveliest playing yet. For ECM fans, it should be especially poignant to hear Garbarek and DeJohnette reunited in the studio, a planetary alignment not heard on the label since 1982’s Voice from the Past – PARADIGM.

Although Vitous has never been one for predictability, he is a poster child for reliability. One catch of “Bamboo Forest,” and it’s obvious: he is a musician’s musician, whose muscling ranges from powerful to miniscule (note, for example, his acrobatics in the penultimate track, “Medium”). Spurred along by a Brazilian vibe, the joyous sweep of this album opener finds Garbarek ticking off a smooth list of errands, adding depth to the gloss with every lick of his reed. And really, it’s the Vitous-Garbarek-DeJohnette nexus that holds the molecule together throughout, flexing with especial limberness in “Univoyage.” Here DeJohnette holds down the fort while the rest flit about with all the freedom of the world at their wingtips. McLaughlin and Corea provide spectral flashes in the brightness of their playing, painting the stardust to Garbarek’s eagle-eyed navigation. The swanky “Tramp Blues” finds the same trio walking a tightrope of expression toward more playful destinations.

Other configurations, however, do arise organically from the mix. There is the bass-drums-guitar grouping of “Faith Run,” which deposits DeJohnette’s propulsion at the center of it all, now gilded by McLaughlin’s sparkling ringlets (it’s also the last of three tracks featuring light brass accompaniment). Yet another coloration introduces itself in “Sun Flower,” which brings Corea back into the mix alongside the dynamic rhythm section. Pianist, drummer, and bassist dance and divine by turns, Garbarek hanging low to bring earthier hues to canvas. Corea hangs around for “Miro Bop.” This swinging piece of prosody lights its fair share of fireworks from DeJohnette, while Garbarek again proves his chops and strategic deployment as a jazzman. The saxophonist joins Vitous in “Beethoven,” a slick lesson in translation with DeJohnette acting as interpreter. What goes around comes around as “Brazil Waves” ends the album in the same vein with which it began: an atmospheric ride through surging beats and melodic treats.

Universal Syncopations is a tapestry of sound woven by steady, practiced hands. Each musician knows when to make way for another’s pass of thread and to contribute his own color when appropriate. The overall effect is unanimous and gifts us with a chunk of unforgettable, life-affirming jazz, its heart in all the right places.