Putting on Trio Libero’s self-titled debut is like putting on a cashmere robe: it feels that good.

The level of comfort shared by saxophonist Andy Sheppard, bassist Michel Benita, and drummer Sebastian Rochford bears out from the first moments of opener “Libertino” with a looseness that never loses sight or hold of things. The themes are forthcoming but never insistent. An early solo from Benita trades off with some beautiful blowing from Sheppard, who unwinds a kite string toward cloudless sky. “Slip Duty” fronts Rochford’s limber bodywork as it traverses the landscape of his kit. To this percolating core Benita and Sheppard contribute structurally thematic elements in a variety of densities. “I’m Always Chasing Rainbows” features Sheppard on soprano. Despite the whimsical title, it describes a world of honest reflection. The two-part “Spacewalk” indeed balances gravity and buoyancy, an alterity of pathos that breathes melody and ends with a nebular cry for solidarity. “Dia da Liberdade” opens with an almost mournful bass solo, a lullaby for the fallen that trips the pulse of Sheppard’s wood-planed entrance. At times one can hear Paul Motian speaking through the drumming (he would pass away only four months after this album was recorded), only with a moth’s added murmuring. “Land of Nod” features more astuteness from Rochford in step with bass and piano. Don’t let the title fool you. It is one of the album’s livelier tracks and ripples beautifully at Sheppard’s fingertips as might a pond’s surface at the touch of a leaf. “The Unconditional Secret” is by far the most beautiful statement of the album. Its diurnal collage unites dreams and realities in a collage of transparencies. “Ishidatami” begins with another lovely bass intro, now with a sopranism as lithe as a tightrope walker bounding from anchor to anchor. The title, it bears noting, is a Japanese term for paving stones used to maintain navigable pathways in erosion-prone mountain passages, and serves well as a metaphor for the band’s unity. “Skin / Kaa” sustains a rubato flow into the modal tributary of “Whereveryougoigotoo,” the latter distinguished by its masterfully legato tenoring. “Lots of Stairs” is a weary but never wearying traversal. Under guise of balladry, “When We Live On The Stars…” concludes with a promise that the people and pleasures we adore will still be waiting for us when we wake.

Nowhere within these relatively brief tunes will you find demonstrative solos or waving of virtuosic flags. That said, it requires a special kind of virtuosity to carry off such music so humbly, and with a spirit that is as naked as the day all of us were born. This is the art of the trio, liberated.

(To hear samples of Trio Libero, click the image below.) 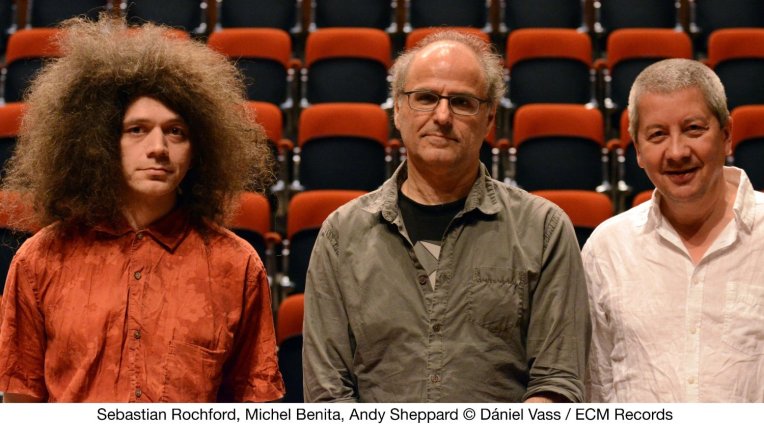